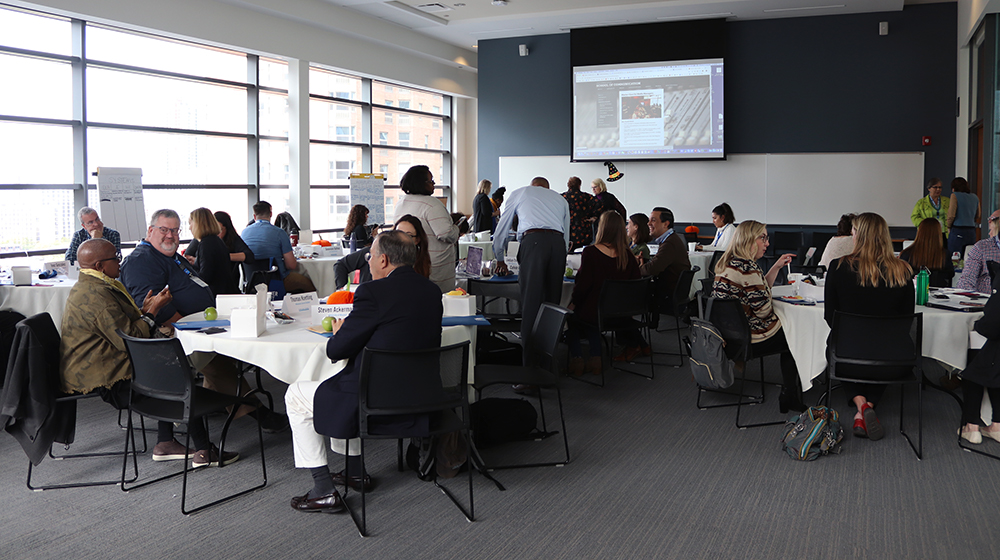 Leaders from media organizations all over the country gathered at Loyola’s Schreiber Center on Oct. 16 and 17 for the Power Shift Project’s “Workplace Integrity: Train the Trainers” program.

The workshop, which held a record-breaking turnout, was created and led by Loyola’s Jill Geisler who holds Loyola’s Bill Plante Chair in Leadership and Media Integrity and is the Freedom Forum Institute Fellow in Women’s Leadership.

Launched by the Freedom Forum Institute in 2018, the Power Shift Project is tailored to newsroom personnel across the country with a goal to create “environments free of harassment, discrimination and incivility – and filled with opportunity, especially for those who have traditionally been denied it.”

The project began shortly after the #MeToo Movement gained attention in 2017 and was awarded a $500,000 grant from CBS Corp. in 2018 after the company fired CEO Leslie Moonves for sexual assault and harassment allegations. This grant allows participants to attend the training free of charge, including reimbursement of travel expenses.

One of the reasons Loyola hosted a training session, according to Geisler, is because the university was “good enough to contribute [Geisler] to the effort” and since the project aligns with its social justice mission. The turnout at Loyola was almost double what it has been at previous “Workplace Integrity: Train the Trainers” events with newsroom leaders traveling from cities like Los Angeles, Dallas and New York City.

“There is something magical about the Loyola campus,” Geisler said. “Every time I bring a program there it has a really robust turnout, and I think there really is an attraction to being on the campus.”

The training utilizes the pillars of “Critical Thinking, Courageous Conversations and Cultures of Respect and Trust” to teach newsroom leaders how to deliver the training within their own workplaces, according to the Freedom Forum Institute. Geisler designed the curriculum using data from the EEOC, research on decision making, writings about gender and diversity, and her own experiences in being a newsroom leader to develop an interactive program.

Sean Corcoran, the senior managing editor from WGBH in Boston, attended the training session with hopes of improving workplace culture.

“I want our newsroom to be a place where people want to come to work, where people feel empowered, and I want a culture of respect and civility,” he said.

WQAD news director Alan Baker attended the training with other leaders from his newsroom and felt confident about the workshop.

“I'm very optimistic, especially with the different people in the station here to go through it and implement it back in their own station,” he said. “Hearing everybody's different stories, different takes, different ways of hearing a message and how it can be construed in different ways has been really eye-opening.”