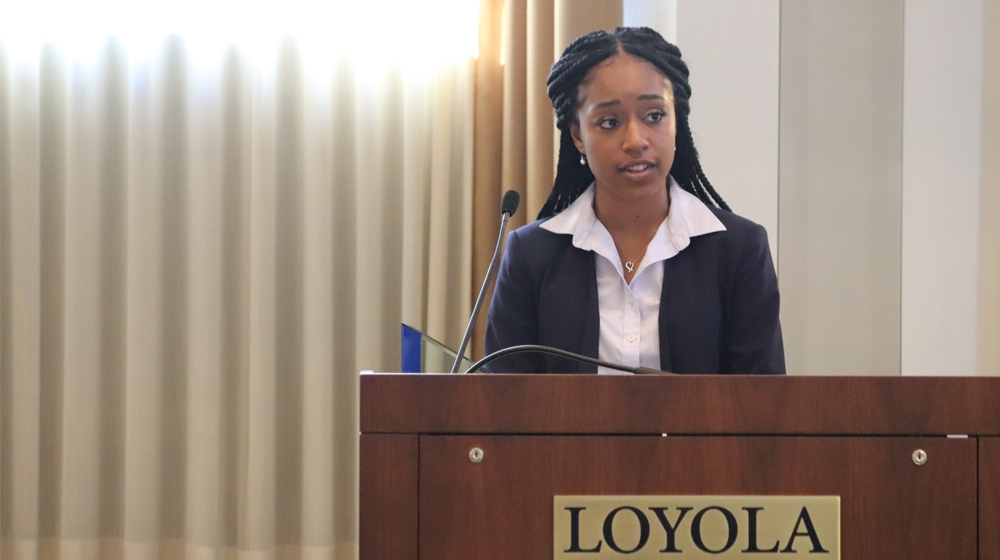 The symposium, sponsored by Loyola’s Center for Digital Ethics and Policy, is designed to showcase leading-edge research and discussion on issues related to ethics in the digital age.

Dumpson spoke to the audience of 200 about the severe harassment that she faced, both online and on campus, beginning in April 2017 after being the first-ever black woman elected as student government president at American University. The racially-motivated comments and displays were intensified when the founder of a Neo-Nazi website called for a “troll storm” against Dumpson.

Dumpson described the bananas hung by nooses all across campus in reference to the gorilla Harambe who was murdered in 2016. She shared her experience by reading some of the hate-filled and racist messages and comments which were directed towards her on social media.

The award was given to Dumpson not because of the trauma she endured, but because of the way she used the court system as well as restorative justice to combat online hate speech.

Dumpson sued one of the site’s followers, along with three others, for interfering with her right to an education — an unprecedented lawsuit. The parties settled on the basis that the man apologize to Dumpson, receive counseling and anti-hate training, and complete coursework and community service in relation to gender and race.

During her speech at the Symposium, Dumpson criticized online communities for allowing hate speech to occur online, despite it being just as harmful as it is in-person.

“We would not allow events like this to take place in person without taking the necessary precautions,” she said. “Why then do we allow this to happen on college campuses and simply expect these young adults to grow thick skin?”

Dumpson’s speech was followed by a Q&A session led by Jill Geisler, holder of Loyola’s Bill Plante Chair in Leadership and Media Integrity.