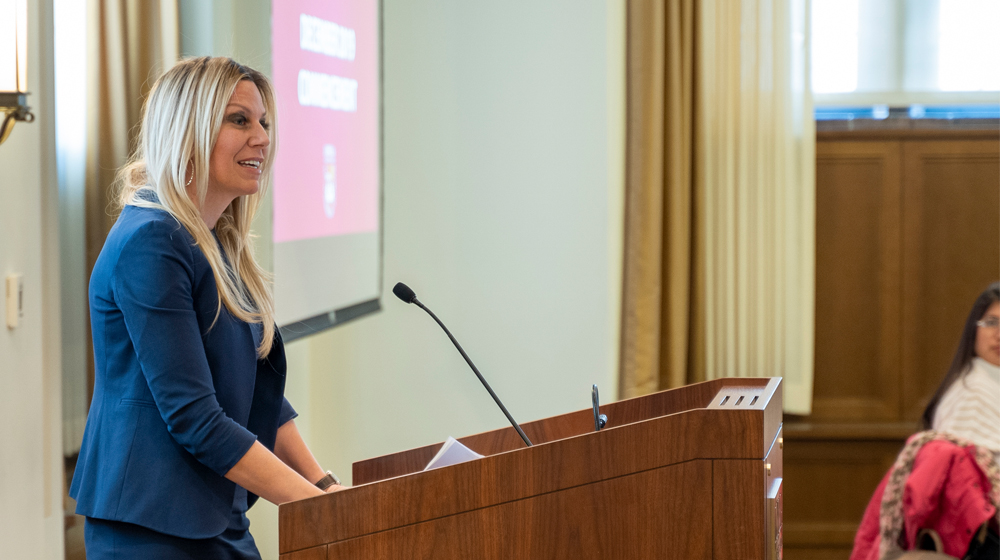 Commencement speaker Laura Maness, a 1999 Loyola graduate with a B.A. in Communication and Marketing, is the first female CEO of Havas New York — a global, award-winning advertising agency.

Before presenting the graduates, Dean Hong Cheng welcomed graduates and their families and introduced Jacob Bolling to give the student address and Laura Maness — Loyola alumnus and CEO of Havas New York — to give the commencement speech.

In the address to his peers, Bolling, a multimedia journalism major, commended Loyola for providing students with a path to success.

“Many of us know, or claim to know, exactly what the next step to take may be,” he said. “Whether that step is an internship or a full-time job or even a backpacking trip through Europe, whatever awaits us after graduation, I’m confident that Loyola has given us the tools to not only succeed but to change the world.”

Bolling ended his speech by thanking his family, peers and instructors for aiding him in his success.

Laura Maness graduated Loyola in 1999 with a B.A. in Communication and Marketing. Now, she is the first female CEO of Havas New York — a global, award-winning advertising agency.

In her commencement speech, Maness attributed much of her success to her humble beginnings at Loyola University Chicago.

“Loyola expects its graduates to be the leaders of tomorrow,” she said. “It looks at the five core principles of Jesuit education to achieve this goal. Combining the five Jesuit values with the diversity of a city like Chicago has already given you distinct advantages as you set out to lead in whatever field you choose.”

While graduating early, the mid-year graduates will be welcomed back again in spring when the School of Communication holds its full commencement on May 7.