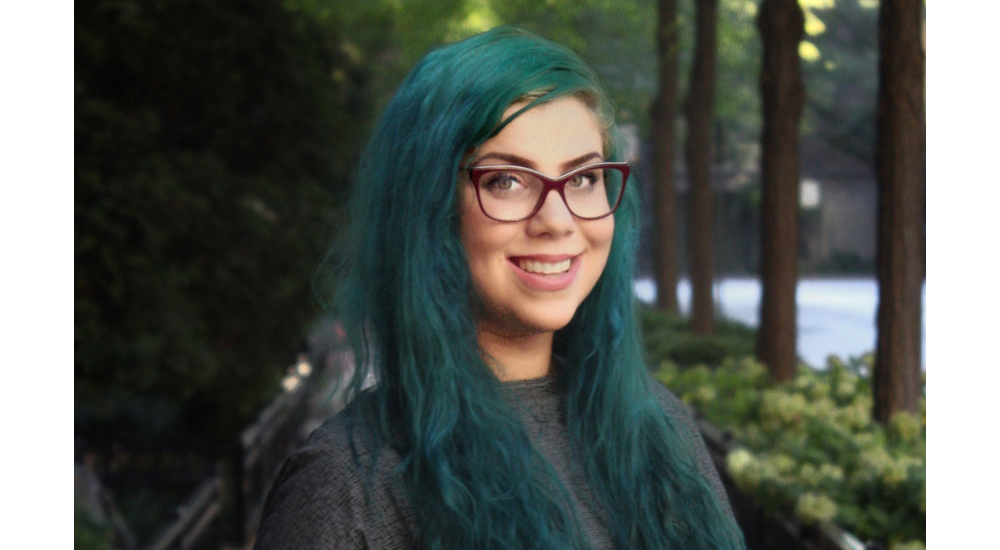 I have always lived off campus, so I'm still living in my home in the North Park neighborhood. For me, I guess it's been kind of crazy because I work for Loyola at Lake Shore, and I was also working as a bar waitress so that has been kind of interesting transitioning because I basically transitioned back into my house. It's weird to not be on campus at all. It's just been kind of weird in general.

I was applying for PhD programs… This semester, I went on five campus visits from the second week of February until March 9, so I was flying and traveling a lot when this whole thing was coming to the forefront. The week before St. Patrick's Day, … I took seven flights and an Amtrak train. When I got back to Chicago, I was supposed to go back to work at the bar, and a couple days before St. Patrick’s Day, we got all the news that you can come into contact with someone who has the coronavirus and be asymptomatic and still spread it. So, I actually tried to call out of work with my job saying “Hey, I'm really nervous about how many flights I've been on in the past week, I don’t know if I'm gonna end up spreading it to someone.” Especially because there's no way we can keep 6 ft apart in the bar I work at because it's a really popular bar in Chicago. And because I tried to self-isolate, they actually fired me… So I felt kind of crummy and then literally the next day is when Pritzker and Lightfoot announced the closing of all the bars, so I didn’t feel as bad, especially because I would have essentially been furloughed the next day anyways.
There’s been a lot of stressors financially, and even though I didn't have to move off-campus, it's been an interesting transition because I'm also getting ready to move this summer to Michigan and start at Michigan State in the fall.

How do you plan on staying focused and motivated during the “stay-at-home” order?

For me, admittedly it's still a struggle and I'm still trying to figure it out and get my groove. I think the way I've rephrased it in my mind is like: In the fall, you’re starting a PhD program, sure you’ll have classes, but you’re going to have a lot of time that you’re going to have to structure yourself. So I’m trying to use this time period as a trial run to test out some of my time management, routine and discipline.

I try to still get up at 6:45 like I normally do; I shower every day; I get dressed, even if I put on comfy clothes, a different set of comfy clothes that I didn’t sleep in. I've been spending a lot of time scrolling through social media trying to read news and feeling this overwhelming sense of pending doom, and I realized it was not productive. My new plan is I’m gonna listen to a couple of news podcasts in the morning when I'm getting dressed, taking my shower, and making coffee. I've been making breakfast trying to make a balanced breakfast, and really incorporate a lot of fruits and veggies to keep my immune system high.
I’m working on a couple of different academic papers right now. I have a couple of co-authors I'm working with, so I’ve been having conversations with them. Those are obviously work-related, but those are also conversations where we’re all trying to talk through how to deal with the range of emotions going with it.
Some of my other friends are academics at different universities and hearing people who are professors or post-docs in different spaces say “Look, I’ve been doing this for X amount of years and I can’t focus right now” has given me the ability to kind of forgive myself when things aren’t going as well as I want them to be, to try and be kind and to engage in self-care.
I volunteer for a non-profit in Chicago called Chicago for Chicagoans - we typically do pay what you can walking tours and a speakeasy lecture series in the winter time that’s about history in Chicago - obviously we’re not doing that right now… We ended up doing like a virtual historian happy hour, so we were hanging out on Skype Friday night, talking about history… It was kind of cool because normally my life is really busy with school and working two jobs so I don't get to socialize a lot. It's kind of weird I've actually been more social the last two weeks through virtual channels. That’s me trying to find the silver lining to all of this.

How has your experience been transitioning to online classes?

This whole process sucks for everyone. I think maybe for me I have a different perspective because while I’m taking classes and adapting as a student, I'm also trying to simultaneously figure out how to work with the people that are in the program that I work with to adapt all of our classes to teach online. I taught my first Zoom class today, and it was weird. It was weird and uncomfortable because I didn’t realize until today how much I rely on people’s nonverbal communication when I’m in front of a class… I have no sort of visual feedback that I’m not talking into this empty void. For me, that was awkward and having to adapt my curriculum was awkward, but I can't imagine being a professor that teaches twice a week with a way more in depth curriculum than I have and trying to put that into an online space. Also if I were someone that isn’t as tech savvy as I am, how would that feel for me?… I’ve heard kids on Instagram and Facebook and stuff like that ranting about how they didn’t sign up to take online classes and how their professor isn’t organized. And I get it, it sucks, but I wish everyone would be kind about it because it’s not ideal for anybody. Yeah, you didn’t sign up to take the class online, your professor probably didn't sign up to teach the class online either.

I was working on a project for Dr. [George] Villanueva’s class, and I was already curious about little tree libraries and I was originally going to do a project that looked at partnering little free libraries with CTA infrastructure to build community based libraries in places where you didn’t have as much access to libraries. And because I had to interview people I knew I wouldn’t get a response from the CTA with all of this going on so I was freaking out and scrolling through Facebook and someone from Andersonville shared that someone had adapted their little free library into a food pantry. So I made a post [about it]… Yesterday, I spent the afternoon talking with two different women in Andersonville who have gone out and converted their little tree libraries into food pantries. There's things like non-perishable food in there and toilet paper… One of them said … someone took an envelope with sidewalk chalk and taped it into our little tree library with a note so if you’re walking with kids - as long as you hand sanitize first - you can take the chalk and draw some art work and share it with the community.
I've seen a lot of people utilizing social media, not for just issue/awareness raising, but saying things like, “Hey I have this thing, if you know someone who needs it it'll be on my porch where I live, and they can come and get it.''
So it's been really interesting when you think about historically a lot of the activism we’ve seen on social media platforms has been sharing or resharing more video content about a topic that has a commentary on it or resharing previously established commentaries with getting reactions to actually utilizing both Facebook and Instagram and Twitter too to having some sort of demonstratable and deliverable action instead of just talking about something. It feels less about posting something that's generating self-serving social currency and more about participating in something that's bigger than you.