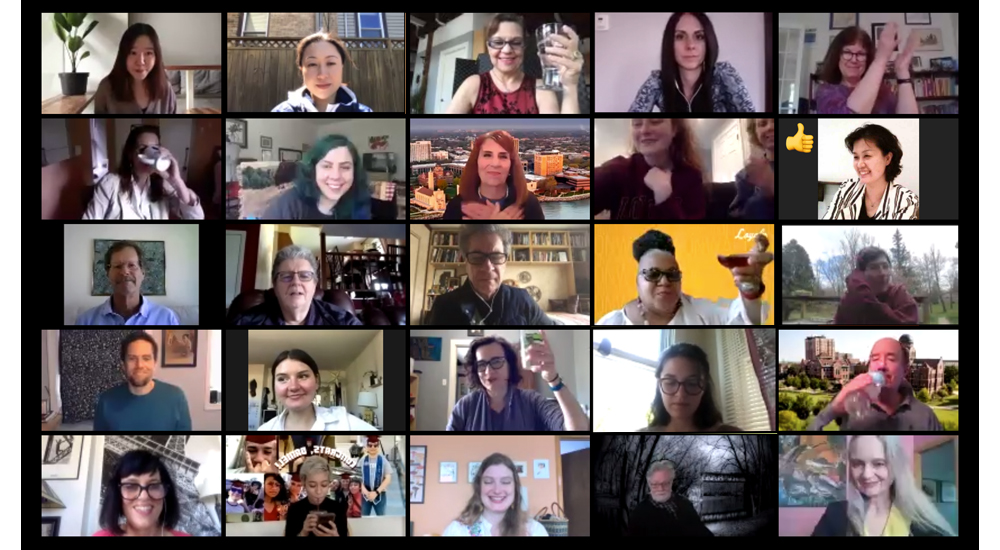 Students, faculty and staff toast to the class of 2020.

Students, faculty and staff reflected on the close of the school year at a virtual Year-End Celebration hosted by Loyola’s School of Communication.

Close to 80 participants joined in on a Zoom conference call to mark the end of the spring semester, one that will long be remembered for the challenges presented by the coronavirus pandemic.

When Loyola’s campuses closed in mid-March, students and faculty were forced to shelter in, and all classes transitioned to online learning. Besides missing out on campus activities, students, particularly seniors, didn’t have a chance to say their goodbyes in person.

SOC Dean Hong Cheng decided to host the Year-End Celebration on May 11 to give students, faculty and staff an opportunity to see each other on Zoom and make some closing remarks.

“If not for COVID-19, we would be having this celebration in person,” Cheng said in his introduction. “As a school, we have not only finished a challenging and unprecedented year, but also not wasted any moment during this crisis…You have turned this crisis into a teaching and learning opportunity.” 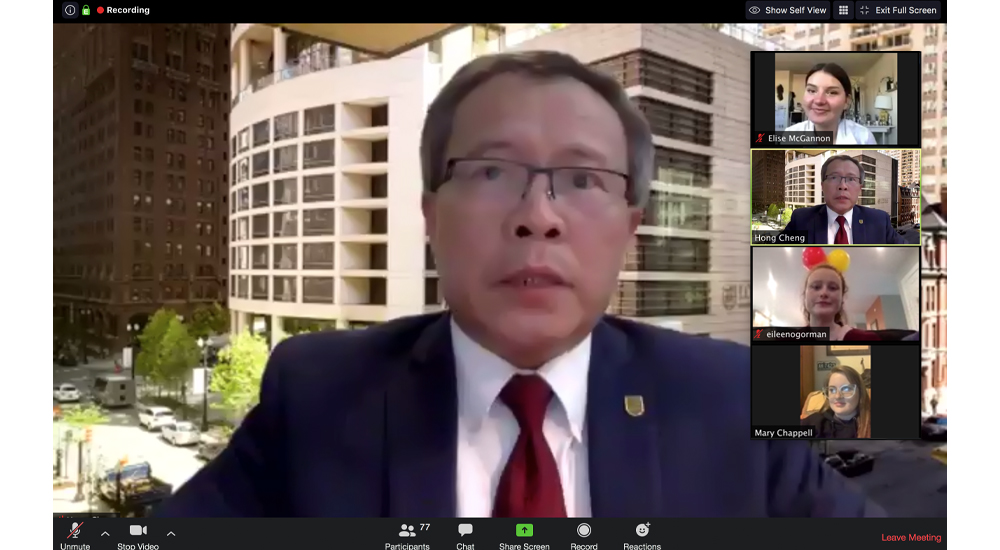 The SOC Year-End Celebration was open to all students, as Loyola hopes to conduct on-campus graduations in fall, should current Illinois shelter-in orders be eased.

Rockwell joined Loyola in 1992. She served as Associate Dean of the School of Communication from 2008-2013. She was previously Undergraduate Program Director for the Department of Communication, a Center for Ethics Fellow and Director of Peace Studies. Her Loyola affiliations include Women’s Studies, EVOKE, Student Leadership programs, the Center for Experiential Learning and the Graduate School. She has been recognized as an outstanding ‌woman leader by Loyola’s Gannon Scholars and her biography is included in Notable American Women: 2000-2006.

“We learn a whole lot from you, the students,” Rockwell said during the celebration. “You inspire us. Every day you have a success, we feel like a successful teacher or researcher. Teaching is an honor and a privilege. And we take great pride in your accomplishments.”

Fletcher joined Loyola in 1986. She is both scholar and a New York Times best-selling author. Fletcher has written five books. The most recent, Every Contact Leaves a Trace, was published in 2007. In it, crime scene investigators discuss their work. Her first book, Who Runs Chicago?, a collaboration with two Chicago Tribune reporters, outlined the power structure in Chicago. She has also written three oral histories of police: "What Cops Know," "Pure Cop," and "Breaking and Entering: Women Cops." In spring 2012, Fletcher was among 300 college professors named in a new book entitled The Best 300 Professors (Random House/Princeton Review). 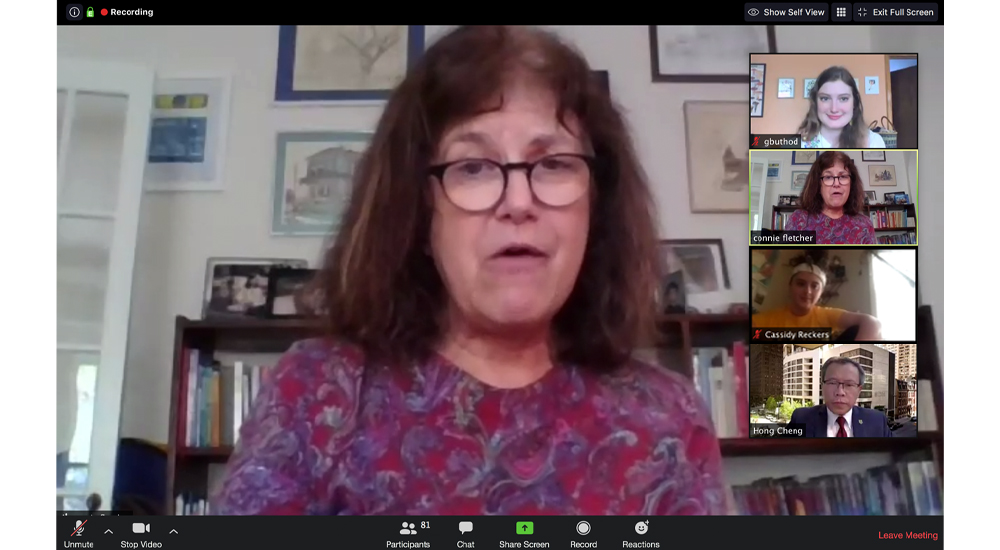 From a young age, Fletcher said she learned the Jesuit motto, “Ad maiorem Dei gloriam,” or “For the Greater Glory of God.” Her older brothers, who attended Loyola Academy Preparatory High School in suburban Wilmette, would write “AMDG” on top of their school papers. Not one to be left behind, Fletcher did the same in 5th grade. Her teacher, a nun, was puzzled and angry.

“What is this AMDG,” the nun asked.

“For the Greater Glory of God,” Fletcher told the sister. “It means everything I do should be for the greater honor and glory of God.”

The nun was rendered speechless.

“I’ve always been proud I stopped a nun dead in her tracks,” Fletcher laughed.

“But to my students,” Fletcher added, “continue to appreciate the value of a Jesuit education.”

Ritchell joined the Loyola faculty in 2005, bringing 25 years of professional experience in senior positions in advertising, marketing, and public relations on both the agency and corporate side. Ritchell served for almost a decade as director of the Advertising and Public Relations ‌program and oversees Ad/PR internships. Starting his career as a copywriter for the Marsteller advertising agency, Ritchell became vice president and management supervisor. He also was a vice president with Ogilvy & Mather, vice president of consumer communications at First Chicago (now Chase) and later head of marketing communications for Navistar International Trucks. In 1998 he joined Edelman Public Relations as a vice president.

Ritchell offered his advice to students.

“You’ve learned three really important things. One is dealing with change. Change management is a huge field in itself. So guess what? You’ve just majored in change. Another thing you’ve learned is dealing with ambiguity. Every challenge you get in the future will not come in the syllabus. The ability to deal with the unknown and deal with ambiguity. And the third is coping skills,” Ritchell said.

Greer joined the new School of Communication and its Communication Studies program as an Assistant Professor in Digital Cinema and Media Production in Fall 2008. Promoted to Associate Professor in 2011, Greer was was also the program director for Film and Digital Media Studies Program from 2012 to 2018.

“Reflecting on my time at Loyola, I realize how much additional growing and learning I’ve had,” Greer said. “I learned so much from my colleagues. I’ve also learned a ton from my students. To the students I want to thank you all for your contribution to my education.” 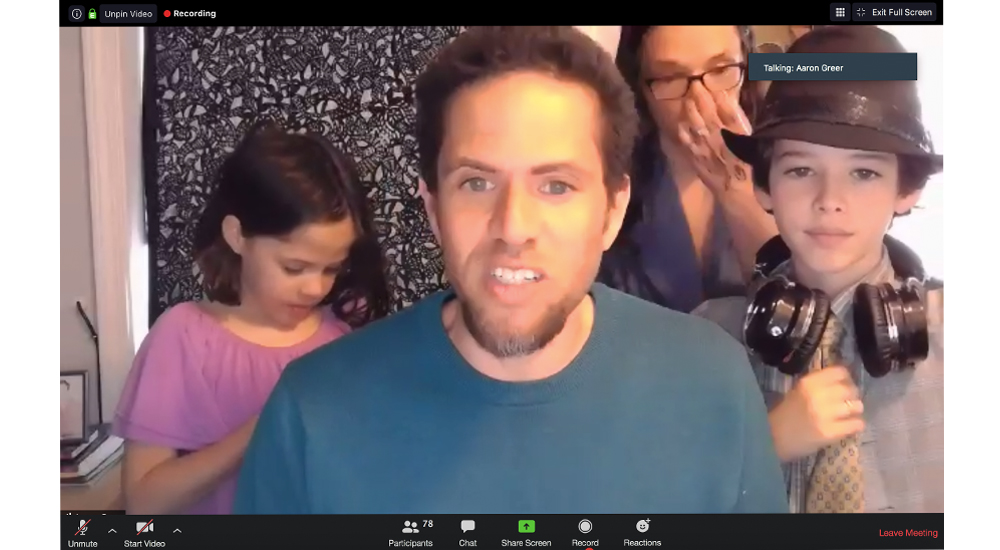 Professor Aaron Greer was joined by his family to bid his farewell.

Students participating in the online celebration also had an opportunity to speak.

“I want to thank the professors who helped me grow over the past two years in the SOC,” Quinn said. With two years’ studies in a master’s program in the school after college, he feels “completely different now.”

“I want to not only thank my professors in the School of Communication, but the students I work with at WLUW,” Clancy said. “It’s such a privilege to work with them. “

Mary Chappel, new editor-in-chief of the Phoenix, Loyola’s award-winning student newspaper, said that despite the abrupt shift to online learning mid-semester, she thought it was successful.

“Thank you to all the professors in the SOC. Thank you for adapting and making it work,” Chappel said. “Definitely difficult, but it ended up being a great semester.”

The Year-End Celebration also featured a video titled, “SOC Virtual Graduation Card for Class of 2020” for graduating seniors. School of Communication faculty and staff were shown in the video signing a virtual graduation card.