The Reinvention of Advertising 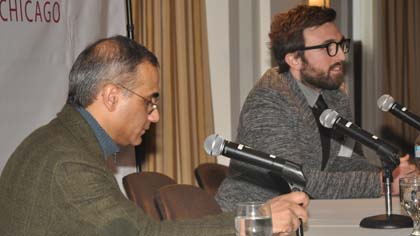 In an age where change is coming daily, how can we keep up?  That was one question posed at a School of Communication event titled “The Reinvention of Advertising” at Loyola University Chicago’s Regents Hall on March 25th.  The answer was shared by both featured speakers: when the world is changing so fast, you have to update with it in real time.

The event featured two innovators: Rishad Tobaccowala, the Chief Strategy and Innovation officer of VivaKi, a global leader in digital advertising solutions, where he focuses on incubating new ideas, approaches and models for next generation marketing and digital storytelling and Scott Thomas or Simple Scott as he is often referred to, lives by the idea that the simplest solution is the best one.  Before founding the Noun Project, a site dedicated to sharing and enhancing the world’s visual language, Scott was the Design Director for the Obama Campaign. He continues to work on creative projects with his team Simple.Honest.Work; hopefully work that “will one day change the world.”

‌Both @Rishad and @SimpleScott, as known on Twitter, are very different men with very different backgrounds in their respective careers.   Change in advertising and all communications is inevitable.  When advertising and marketing agencies ask Rishad, “How do you think the business is going to change?,” he will ask them back, “How are you changing yourselves?”  In order to change the way we do business, we must first change ourselves.  Rishad believes there will be change in education, finance, and health care over the next five to ten years.  This change will come because of what he refers to as the connection engine, or known to some as the Internet.  All three facets are going to change because we are continuously connected to all three, twenty-four hours a day.  Education, finance, and health care are all equally important in today’s culture and we must treat them equally in order to properly prosper.

Rishad then spoke of a term he called ‘Digital Leakage’ which refers to the opportunities and threats that come from external sources.  Facebook, Google, Twitter, Amazon, and Netflix hate one another he says, but business threats come from other places.  These different sites have very different uses: Facebook is for sharing while Twitter is for real-time news.  Amazon is the online hub for transactions,  Google was made to discover and Netflix is an entertainment epicenter.  These sites were created for their own specific reasons.  But leakage comes from external places.  Rishad says Apple killed Nokia, Nintendo and Nikon with one product: the iPhone.  But change was inevitable. 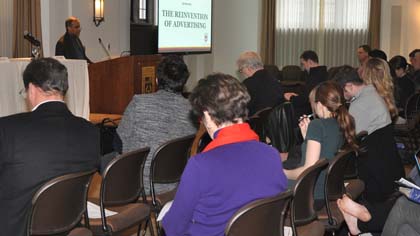 ‌“We understand the potential of what it means to be fully connected,” says Simple Scott, but what does it mean to be fully connected?  Using websites like Facebook, Google, Twitter, Amazon, and Netflix constitutes as fully connected.  Ten years ago we could not imagine this immense connection.  Now, the Internet is a place to share information as well as inherit liquid content, or content that is optimized for sharing.  The content that is being shared is campaign driven; the content that needs to be shared must be thoughtful as well as shareable.  The information or content is unnecessary if it isn’t shareable.

Scott found his calling in simplicity.  He has past experiences in design as well as marketing, which makes for an interesting combination.  In design, he believes one can communicate most effectively by “figuring out what you want to communicate and doing it with simplicity.” People enjoy a strong aesthetic, as well as a straightforward and consistent message.

Scott and Rishad enjoyed speaking with one another about the future and the reinvention of advertising.  They both believe that change is inevitable.  Simple Scott is established in simplicity.  He talked about how the Obama campaign kept a clear and simple message that was to be kept consistent on all mediums, which turned into a successful campaign blueprint.  Rishad focuses on change, but changing ourselves.  Being able to work for healthier change in our own lives is what makes us who we are.  He says in order to effectively change the way we do business, we have to successfully change the way we act in the connected culture that we have now become.