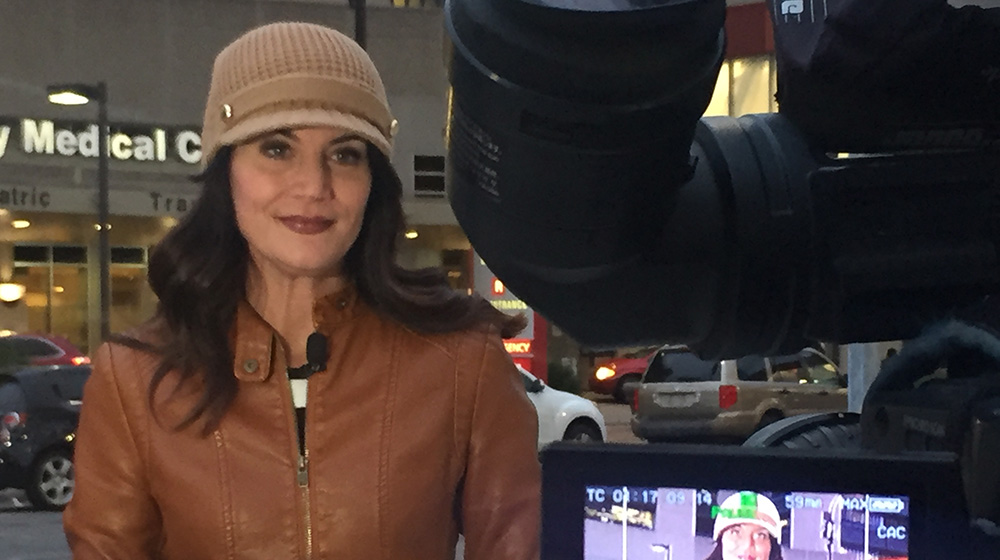 In the often intense business of journalism, School of Communication alumna Ellen Galles said one kind, patient person is all you need to help you along the way.

Galles graduated from Loyola in ‘98 with a double major in communication and political science. Today, she works in St. Paul, Minnesota as a general assignment reporter at ABC 5 Eyewitness News.

Being a general assignment reporter is “the type of job where you come in and you have no idea what you’re doing,” she said. “Every day is different.” And that’s what she loves.

Galles’ career began in Traverse City, Michigan working at NBC 7 & 4. She then worked as both a general assignment and consumer reporter at ABC 24 in Memphis. She moved to Minneapolis to work for Fox 9 before starting at her current position.

During her five years at ABC 5, Galles said the Twin Cities have become her home.

“It’s meaningful to cover events that affect me, my family, my kids, and neighbors,” she said. “I feel invested in the market and in the area. In this job you move around, but I’ve been here for a while and it’s become home.”

One of hardest aspects of her job is having to interview people in “tragic circumstances,” Galles said. The challenge lies in finding a balance of sympathy and compassion, but also maintaining a professional distance.

“On the worst day of [someone’s] life, you’re the person that...shows up at their doorstep asking them to relive and rehash their story,” she said. “I’m a mom, so sometimes these stories hit close to home.”

Deadlines are also tricky, according to Galles. “It’s a lot of work in a short amount of time,” she said.

Additionally, every station is trying to incorporate more social media and develop an online presence.

“You have to keep evolving, [stay] relevant,” she said. “These are the new evolving challenges.”

The Nebraska native said her career path always led her to journalism.

“I've known for a long time,” she said. “I've always liked writing. I had a typewriter in grade school. I'm a curious person, I like telling stories and I like people.”

Galles said she had limited understanding of journalism in high school, even though she worked on the newspaper staff. It wasn’t until her internships in college that she was able to immerse herself in opportunities to practice her craft.

She interned at several stations during her time at Loyola, including NBC 5, CBS 2, and CBS’s “48 Hours.”

Galles described herself as a “sponge” soaking in the experience, information and learning the inner-workings of the newsroom.

“That was probably the most eye-opening experience — working in a metropolitan area,” she said. “It's not always glamorous, but it’s always dynamic.”

She credited many of these opportunities to her mentors and professors at Loyola, namely Connie Fletcher, Ph.D. and Studio Manager Jim Collins.

“I took an interviewing class with [Dr. Fletcher],” Galles said. “It was eye-opening how much thought needs to go into [interview] questions...and just how much of that is an art and science. The right question can really speak.”

Collins was helpful from a practical standpoint in TV production, according to Galles.

“Jim helped make a couple of good connections,” she said. “He helped me with resume tape, he helped me put a reel together. I always credit him.”

“I remember she was wanted to work on her reel,” Collins said. “We went out and did a stand-up in front of Lake Michigan — in front of Madonna Della Strata. We did four or five takes.”

“She was always very happy, always had a smile, always really upbeat,” Collins said. “And it’s clear that she loves what she does and she’s very good at it.”

Galles said Loyola taught her the power of networking.

“All of these people were so nice and I’m still in touch with many of (them)...I joke that I’m the intern that won’t go away,” she said.

Galles said the kindness of her mentors have stuck with her and have made her devoted to showing the same kindness towards budding journalists.

“It takes one nice person who is patient, kind and who will help you, she said. “I was so pleasantly surprised how many good people there are in the business who wanted to help and really wanted to see me succeed. I've always tied to be that way with people who intern in my newsroom. I think about them all that time. Everybody deserves that.”

Galles said she’s had the opportunity to report many important events like covering the Pope’s funeral in Rome. She has also been part of an Emmy-award winning coverage.

But, one of the most rewarding things about her job is watching “ordinary people doing extraordinary things,” and giving them a voice, Galles said.

“I am proud that I am still [reporting], a lot of people burn out,” she said. “I still like it and it’s still as meaningful as it was 20 years ago.”