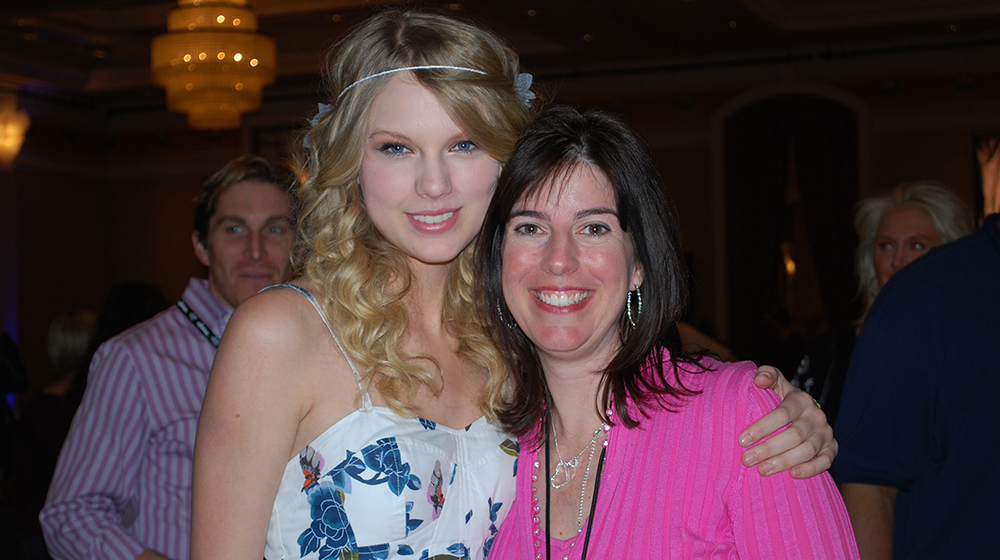 As a top-rated radio personality for Chicago’s US99 country music station, class of ‘89 alum Trish Biondo-Soltys masterfully interviewed renowned musicians, athletes and politicians alike. Soon, she’ll be sharing her wisdom with graduates at the 2017 School of Communication commencement ceremony.

In her 28 years doing mornings and midday broadcasts for US99, she met almost all the stars in the industry: “You name ‘em, and I’ve met them,” she said.

She crossed paths with actor Kevin Costner and singer-songwriter Lionel Richie, and was invited to the houses of celebs such as Reba McEntire. At one time, she worked with Scott Borchetta, the man who discovered Taylor Swift.

What Biondo-Soltys loved, though, was simply the chance to help artists share their meaningful music, hear people’s stories and be a positive part of listeners’ lives.

“I just wanted them to have a good day,” she said. “I loved sharing music with them – especially if there was a great message in the song … [and] I wanted the artists to be able to talk about what they did and what they loved.”

Biondo-Soltys, who was nominated four times for Major Market Broadcaster of the Year by the Academy of Country Music, and won Billboard's Music Director of the Year, has her own fascinating story to tell. 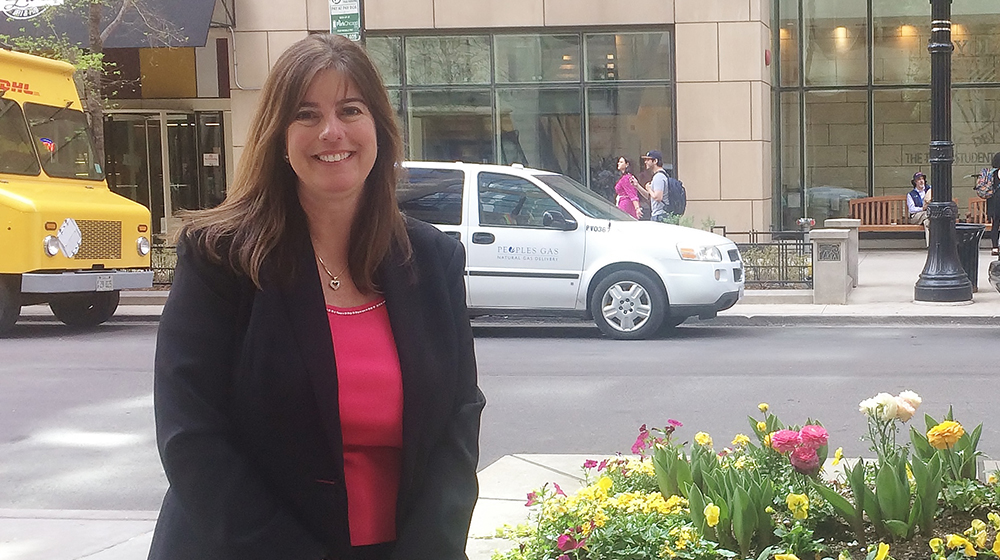 She grew up on the Southwest Side of Chicago listening to country music, but in high school she thought she wanted to go into nursing. That changed once others pointed out her strengths in English and writing, so when Biondo-Soltys went on to attend Loyola University Chicago, she thought she would go into public relations.

On a day that would shape the rest of her career, Biondo-Soltys was listening to US99 in the car with her mom. They heard an advertisement recruiting college students to work part-time in the research department for the station, otherwise known as WUSN-FM.

“I couldn’t plan this out,” she said. “It all just kind of happened at the right time.”

Biondo-Soltys worked at the station consistently throughout college and picked up summer internships along the way. She interned for the Murphy in the Morning show at WKQX and became a production intern for ABC-TV, working down the hall from Oprah Winfrey.

One summer, she was faced with the difficult choice between studying at Loyola’s Rome Center and interning at MTM Records in Nashville. With post-graduation plans already on her mind, she chose the latter.

“The choice I made was right for me at the moment, and it led me to a really, really successful career and great friends that I met in Nashville that I’m still in touch with to this day,” she said.

Because her mom worked for Midway Airlines at the time, Biondo-Soltys was also able to hold onto her position at US99 that summer. Using her mom’s company flying perks, she spent the weeks in Nashville and flew to Chicago every other weekend to conduct surveys for US99.

The connections she made in Music City helped her gain more footing at US99 when she returned to living in Chicago, and her part-time research position helped her connect one-on-one with listeners.

“It was not a fun job,” she said. “You [would have] to call up people and ask them what their favorite radio station is, what they like, what they didn’t like … and all that played into what I did at that radio station later on.”

The summer after graduating with a bachelor’s degree in communication, Biondo-Soltys secured a full-time position at the station. Her repertoire would grow to include being a music director, a promotions director and a research director there.

She had done only a little on-air work before March 1990, when the woman on the station’s morning show was leaving. A program director said he wanted Biondo-Soltys to be the replacement.

Swallowing her fears, she did take on the morning show – a position she held for about 16 years. Once she started a family, she switched to midday broadcasts and had what she calls “the best of both worlds.” 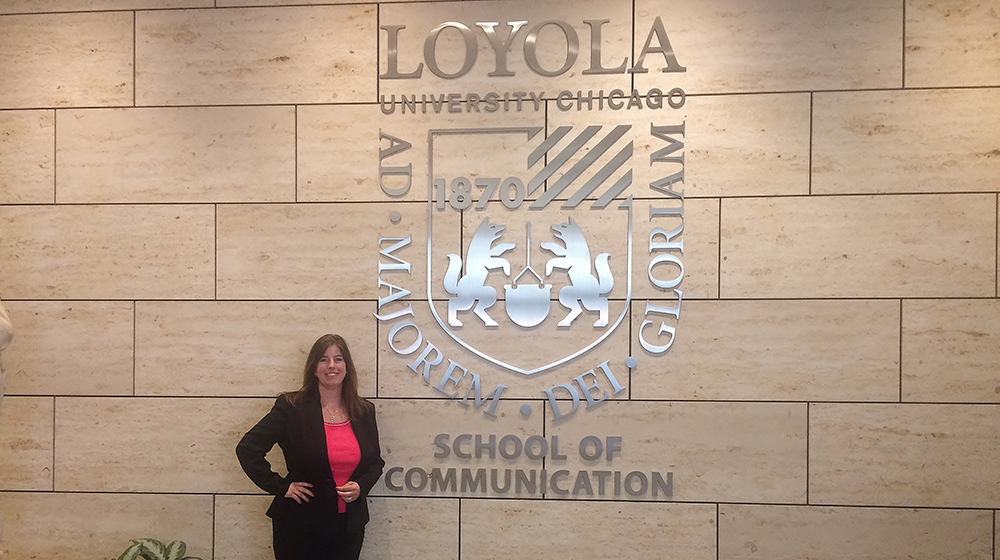 As a radio personality, Biondo-Soltys remained genuine, steered clear of shallow “shtick” tactics and kept in mind that there was always more to every story, which she learned from an influential professor at Loyola.

She became a co-host for US99’s weekly video show, despite being just as afraid to be on the screen as she had been to go on air. She also gave back to the community in several ways, such as fundraising for St. Jude Children’s Research Hospital through the station’s annual radiothon.

“Radio was wonderful for me because I was able to incorporate everything that’s important to me, like all the charity work, which is something you’re always taught here at Loyola,” she said.

With tremendous passion about her career, Biondo-Soltys devoted her entire self to it. She’d start her day around 3:45 a.m. and might work until 5 p.m., occasionally needing to attend events or concerts afterward. Working such long hours, she learned lessons as she went.

One of the hardest was one nobody could have prepared for. Her cohost on the US99 morning show died of a brain aneurysm when he was just 29 years old, leaving behind a wife and a 6-month-old child.

“It changes your perspective a lot – that’s where you start realizing even though a lot of it is about work, it’s not just about work,” she said.

Biondo-Soltys began making an effort to focus on relationships and fill her life with experiences outside of radio. But her friend’s death remained in the back of her mind when she chose to leave the music industry years later, in part to spend more time with family.

It was “a perfect storm” that ultimately led to Biondo-Soltys’ parting ways, she said. The management style at US99 had changed, her kids were growing up, and her mom had been diagnosed with cancer, given less than six months to live.

“I felt like God was telling me, ‘Hey, it’s just time to step away right now,’” she said.

It was a decision that Biondo-Soltys still feels was for the best, thankful that leaving had been financially feasible.

With a master’s degree in education, Biondo-Soltys has been teaching public speaking classes at Loyola since leaving radio. The course happened to be one of her least favorite when she attended the university – she considers herself to be rather shy.

Regardless, Biondo-Soltys said it was an honor being asked to address the crowd of graduating seniors at commencement.

Don Heider, Dean of the School of Communication, said Biondo-Soltys was a natural choice, as the Loyola alumna has achieved so much in the years since she was sitting in the same spot as the graduating seniors.

“She’s been a fantastic teacher and mentor,” Heider said. “She really is one of those stories where it was all about hard work: getting an opportunity, getting her foot in the door, and then really just making the most of it.”

Although graduating can be bittersweet, Biondo-Soltys said, it’s an opportunity for pause.

“I just hope that the students have a few minutes to reflect and think about how wonderful their accomplishment is, and it’s really important to take time to pat yourself on the back,” she said. “[Commencement is] important for you, it’s important for all the people that supported you.”

There’s a feeling of uncertainty that doesn’t go away, according to Biondo-Soltys – even she can’t quite foresee the next step in her own career. But in a world where change is the only constant, she said, students can count on finding support from their alma mater.

“Loyola gives you just an incredible foundation, and Loyola is always here for you, which a lot of people forget. I think they think [that] once you graduate, it’s over,” she said, “but if you still need help or connections or advice … you can always come back here for that.”