Of 1352 entries, 232 awards were granted among 93 schools. John Goheen, a video and production professor at Loyola, received two awards: best of competition in television news reporting for his video, “Hawaiian Chickens,” and a best of festival award in the faculty video competition for his video “Poverty to Prosperity.”

In each of his classes, he teaches storytelling skills, and although the subject matter of both his entries is fairly diverse, he said that they are similar stylistically. He traveled to Uganda to film his promotional video, “Poverty to Prosperity,” for a nonprofit organization, BeadforLife, to help them promote their work for impoverished women. “I’m at a point in my life and career where when I’m able to give back, I’m more than happy and willing to do so,” said Goheen. He encourages his students to do the same. He tells them, “You’re going to leave here with skills that not everyone has, and when you have an opportunity to volunteer to shoot a video or tell a story that you’re capable of doing, you’ll never know where that will take you or what the benefit will be.”

Goheen has submitted his work in previous years, and views the competition as a good opportunity to compare his work to that of other faculty around the world. Professor Goheen said that this competition is unique because it has a wide variety of categories. He said that this year is the best Loyola has ever done. “All the various categories that students were recognized in, that’s pretty telling about the program we have here at Loyola.” Goheen said. “It just reflects that’s it not just one area, but the whole school.” Out of the 92 schools that entered the competition, only a few won five or more awards.

Lauren McGuigan, a senior communications major, submitted her work after being encouraged by her professor, Aaron Greer. She submitted an episode of Modern Family she wrote for one of her class projects.  McGuigan won 3rd place in the student screenwriting competition.  “I’m pretty shocked still that I won,” she said. “I’m just really grateful that he [Greer] told me and encouraged me to submit, because I never would have thought about doing that.” McGuigan now plans on submitting the script as part of an application for a writing fellowship with Nickelodeon. 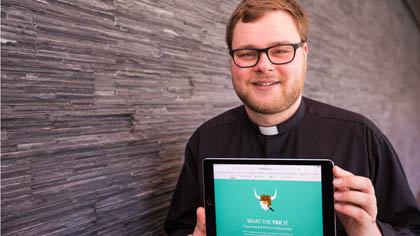 Leopold Stüebner, SJ, was also encouraged by his professor, Patricia Lamberti, to submit his work to the festival. He earned first place in the solo student interactive multimedia competition for his entry entitled “What the Yak !? - Exploring the Ethics of Anonymity.” His interactive website explores the ethics behind the popular app, YikYak. He said that the app usually receives a lot of negative attention, but he wanted to show a different side of it. “I think YikYak is a phenomenal tool.” Stüebner said. “It gives awesome insight into what students think, what they do, what’s on their minds and what’s on their hearts… so as a Jesuit I’m always interested in that.” His website presents students anonymously sharing how they themselves use YikYak. Stüebner said he was impressed by how YikYak requires students to make “ethical judgments on a second’s notice.” Through his research, he has the impression that compared to other schools, Loyola has a fairly high standard in terms of yaks that students find acceptable. He said that Loyola’s feed has a certain tone, and that it is representative of what the campus is about.

The BEA awards allow faculty and students to submit work across a variety of mediums, and award results show the talent present across many fields within the School of Communication.