What companies and governments are doing with our information is a big concern.  But not all groups are using social data for their own purposes.

The School of Communication and the Big Boulder Initiative came together to host a “Using Social Data for Social Good” workshop in early November.

Dozens spent a Saturday at Loyola’s Schreiber Center to discuss topics ranging from “Health and Social Data” to “Social Good and the Internet of Things.” The University of Illinois at Chicago, Northwestern University, the Social Media Club of Chicago and the University of Chicago also co-sponsored the event.

To discuss “Using Civic Tech to Help Citizens,” the workshop invited panelists Derek Edder of Datamade, Rose Afriyie of mRelief and Brett Baker of Twitter. And according to Edder, the term “civic tech” is widely used, but it often means different things to different people.

“The definition I like, is ‘Tools to create, support and serve the public good,’” he said. “That’s what I think ‘civic tech’ is. There are a lot of folks who talk about it being specifically related to government. And I actually think that’s part of civic tech, but I don’t think that’s all of civic tech.”

Edder’s company, Datamade, is a civic technology company that works with open data in the Chicago area. The company works with journalists, academics and government agencies to take data and “do something interesting and public to present to a wider audience.”

In addition to Datamade, he also helps run Chi Hack Night. What began three years ago as a few people getting together to work on civic tech projects has since grown to a weekly meeting of about 100 people. It was at a Chi Hack Night event where he met Afriyie.

“I embarked on my civic tech career after actually attending [Chi Hack Night],” Afriyie said. “It gets together so many different awesome data scientist, developers and everyday people who care about Chicago and want to help make it better through technology.”

On that night, she connected with Chicago’s “Innovation Delivery Team.” The team shared the issues they were facing, including backlogs in social service delivery.

“We started to think about how we could address backlogs in the system,” Afriyie said. “Also at the time, I was embarking on the difficult journey of learning how to code. I was at the Starter League, which is a great institution in Chicago that teaches people how to code.”

She teamed up with some women in her class, along with the City of Chicago, to see if they could build a web application that could help reduce the long wait times created by the backlogs in the social services delivery system. In the end, they created “mRelief,” a website that aims to simplify the process of knowing whether or not one qualifies for public assistance in Chicago and Illinois.

For Baker, civic tech is an area near and dear to his heart. He said civic data allows Twitter to be impactful in a number of different cities.

“For the past couple of years, Detroit has had a big issue with getting rid of debris and urban blight,” he said. “And Twitter partnered with IBM to look at sentiment analysis—to see what are people saying and what are people tweeting about.”

Using Twitter data, the city was able to analyze what messages were being made and where they were coming from. Baker said it allowed Detroit to take a holistic approach to the issue, instead of saying, “Hey, we have a problem, let’s kind of just pick and choose where we go.”

Baker said that ties back to communication.

“It’s one thing if I sit down and tweet and it goes into the Twittersphere,” he said. “But it’s another thing if it goes to the city, and once the problem is solved, [the city] responds back to me.”

That’s the main point of the project, he said. It’s about keeping citizens informed about Detroit’s actions and motivations.

“Another example is from Jakarta,” Baker said. “There was a public/private partnership between an Australian university, Twitter and a government agency in Jakarta, where there is a ton of flooding and it really disrupts daily life.”

What helped, he said, was the “unbelievably high” amount of Twitter users in the city. The partnership used Twitter data to map where users said flooding was happening, displaying it on a map and showing people what areas to avoid.

“So in real time, civic life was improved there,” he said. “This was launched during last winter, and by February 1, there were 100,000 visitors to the map in one single day. It was a matter of taking data in real time and impacting daily life at that specific moment.”

The workshop as a whole spent the day with a number of recognizable names in the data science industry. Aside from Edder, Afriyie and Baker, panelists included CartoDB’s Andrew Hill, Harbor Research’s Jessica Groopman and WBEZ Curious City’s Shawna Allee. 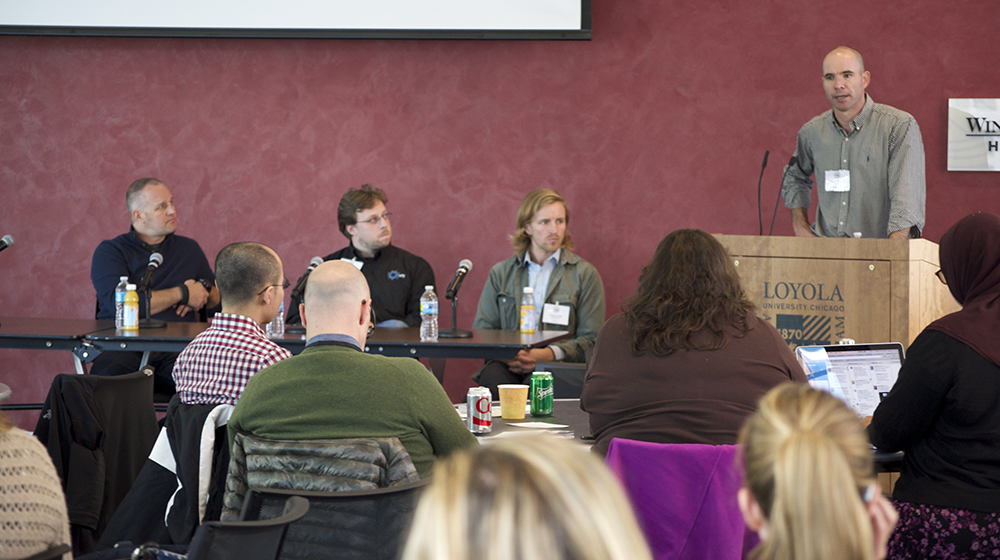