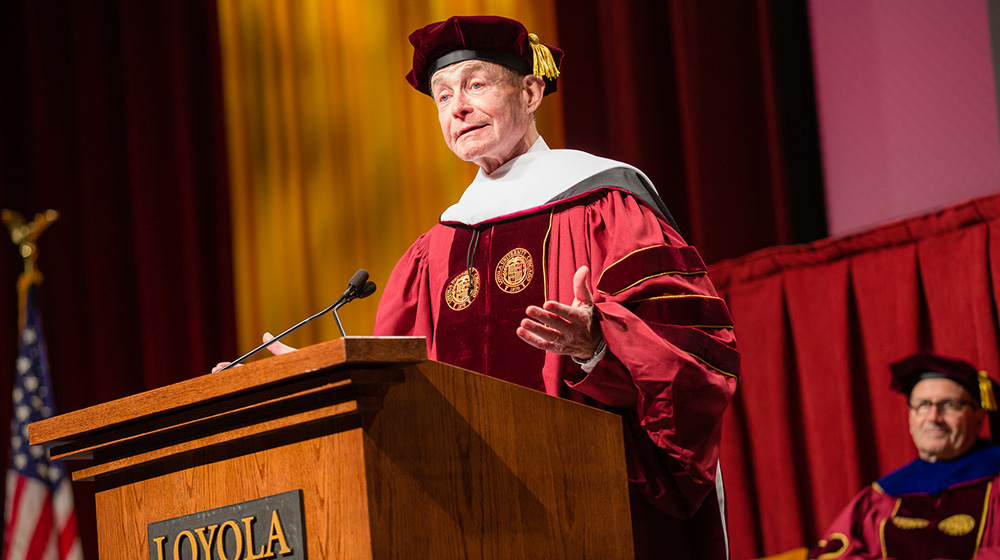 Bill Plante, CBS News Senior White House Correspondent and a Loyola alumnus (BS ’59), returned to his alma mater May 12 to address the School of Communication’s Class of 2016.

The veteran reporter was also awarded the degree of Doctor of Humane Letters by the SOC for his accomplishments throughout his illustrious career in journalism, as well as for his continued involvement with Loyola, including nine years on the Board of Trustees.

“When you think of the gold standard for political journalism, the name that comes to mind is Bill Plante.  We are so proud to have him as one of our alumni and to have him come back to inspire the next generation of communicators,” said Don Heider, Dean of the SOC.

With over a half-century of experience in journalism, Plante gave the graduating class advice for their careers, as well as their lives. One suggestion, especially applicable to students of communication, was to take breaks from the constant flow of information and to learn to live without technology.

“You grew up in a world wired for instant communication…You’re on Facebook, Twitter, Instagram, Snapchat, Periscope and Yik Yak. Find time to step away from it all each day, to set it aside for a while and spend that time in live conversation or contemplation,” Plante told the graduating class.

The audience of graduates, families and faculty reacted favorably.

“I thought that part of his speech was really inspirational and really needed. It is so critical right now for us to take that piece of advice seriously in order to think about the world and about yourself,” said Beth Konrad, Program Director of the Journalism Program.

Plante credits iconic newscasters, such as David Brinkley and Edward R. Murrow, as his inspiration for pursuing a career in journalism. He still remembers Murrow’s Harvest of Shame, a documentary that depicted the plight of American migrant workers. Witnessing these images of prejudices on television, and instilled with his education at Loyola under the Jesuit values of social justice, drove him to apply for a fellowship at CBS News.

In June 1964, Plante was awarded the fellowship and began work at CBS. Just three weeks later, three civil rights workers disappeared under suspicious circumstances in Mississippi.  Plante was sent with other journalists to cover the investigation. After 44 days, their bodies were found buried in a nearby dam. The event became a defining moment within the Civil Rights Movement, and Plante found himself in the middle of it.

“It was a big deal because it was the so-called “Freedom Summer,” when college kids from the North were coming down to the South to register black voters, which was their right. But, it didn't sit well in places like Alabama and Mississippi.  I had never been further south than St. Louis when I was growing up in Chicago, and I might as well have been on the other side of the moon,” Plante said.

During the next several months, he gave a voice to those experiencing systematic injustices, and he interviewed the Rev. Martin Luther King, Jr. during his historic march from Selma to Montgomery.

With tensions also escalating in Vietnam, Plante worked as a foreign correspondent assigned to cover the lengthy and costly war four times before the U.S. withdrew its troops.

In 1981, he was appointed by CBS to cover the Reagan presidency, and subsequently remained in Washington covering the White House for the next 35 years.

“It's a front row seat to American history. I'm reluctant to leave it, which I am in process of doing. I have seen a lot of major events happen because I've had the privilege of having this job. You see, I've covered five presidents, and after a while you can see commonalities.  They all go into office hoping to change things, and they find it very difficult. They tend to make very similar mistakes, not necessarily in the same circumstances, but in similar ways. And as they leave office, they always seem to have wished they had accomplished more,” Plante said.

He was present in the White House Rose Garden in 1993 with President Bill Clinton and witnessed the public handshake between Palestinian leader Yasser Arafat and Israeli Prime Minister Yitzhak Rabin symbolizing their mutual hope for peace in the Middle East. When not covering such historic events, Plante remained very active within the Loyola community and made significant contributions to the growth of the university, including the SOC.

To honor his contributions, the SOC created a professorship titled, the Bill Plante Chair of Leadership and Media Integrity.

The desire to stay involved, Plante says, originates from the Jesuit ideals that he was taught at Loyola, ideals that he has kept throughout his career.  His return to Loyola for the commencement ceremonies was another example of contributing to the lives of others.

“It's kind of the old pay-it-forward philosophy. I have watched the university and the SOC really grow and become a major force within academia. It's reach and reputation has grown exponentially. Not only does it compete with any other university, but it's an education under the Jesuit model, which I highly value because it teaches you to be concerned for others as well as yourself,” Plante said.  “It's something I've been grateful to have had in my education, and I'm happy to help in any way I can to pass it along.”