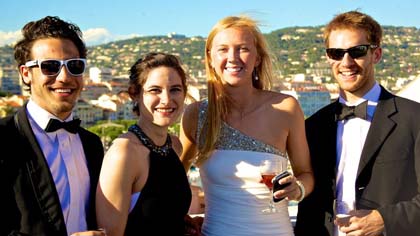 The Cannes Film Festival is a huge event for film, a high achievement for filmmakers and a new learning experience for Loyola alum and student Jarrad Quadir and Taylor Banasik, who attended and screened their film at the most recent festival.

Quadir, an International Film and Media Studies alum, and Banasik, who finished her International Film and Media Studies degree and is currently studying Visual Communication, had the opportunity to attend the festival after competing in Campus MovieFest, a travelling movie competition that allows student filmmakers one week and all the equipment they need to make a five-minute film.

Their film “In A Rut”, a surreal look at post-graduate life, created by Quadir, Banasik and Loyola student Chris Cady won Loyola’s Best Picture and was one of 30 campus Best Picture films chosen for screening at Cannes.

“We were pretty serious about shooting for Best Picture,” said Banasik.

Though they didn’t expect to make it to Cannes, Banasik and Quadir felt confident about their final product.

“It’s pretty rare to be fully proud of a movie from start to finish,” said Quadir.

Quadir and Banasik had never been to a festival larger than the Chicago Film Festival before Cannes and weren’t sure what to expect from a festival that was frequented by international celebrities and famous filmmakers.

“I don’t think we had any idea what we were getting ourselves into honestly,” said Banasik.

They had the opportunity to walk on the red carpet and see new film screenings, some of which took hours to get tickets. One of their most frequent topics they discussed before heading to Cannes was what to wear to the film screenings, as they had to dress formally, said Quadir and Banasik.

“It’s as if prom were every day,” said Banasik.

Their film was also viewed in the sort film corner of Cannes along with 30 other films from Campus MovieFest and other short films.  ‌

“All kinds of people show movies there, just a hodge-podge of people who were already doing stuff and students,” said Banasik. 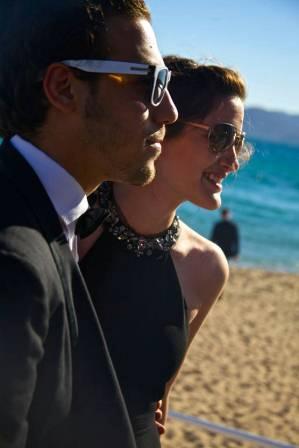 Though most visitors viewed short films through individual screenings in booths, there was one short film screening at Cannes. So many people came to the screening Quadir and Banasik couldn’t get in.

Quadir and Banasik also got a glimpse into the real-life business of movie making, something they had not experienced as production students.

“I think we learned a lot about film as an industry in the business sense, which is hard to teach in the classroom,” said Banasik, “The film industry encompasses so many jobs, you wouldn’t even imagine.”

They were able to meet students who were interested in all aspects of film and who had created their projects with all kinds of resources, some who had started Kickstarters and had $2000 budgets.

“In a way, that was super satisfying to me,” said Banasik, who said they spent around $40 on their production.

With the technology that even students have at their disposal today, it’s easy to create films that look professional, they said.

“It should be easy to make something that looks good,” said Quadir, “It’s bringing it back to the storytelling.”