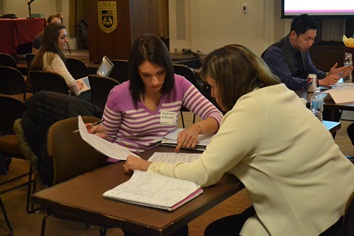 As January comes to a close, undergraduates are remaking every inch of their professional personalities to lock down that perfect summer internship. Luckily for Loyola students, the School of Communication’s Résumé Workshop on Tuesday paired them with professionals to refine their résumés, network and pass on a few tips of the trade.

For the fourth year in a row, the SOC offered the workshop as part of the larger Career Week which helps students prepare for the Career Fair on Tuesday, February 4.

“This is an invaluable collection of resources,” said SOC Director of Internship and Career Services Cheryl McPhilimy. “It’s a remarkable opportunity to meet with those professionals who are there with the sole purpose to help Loyola students.” 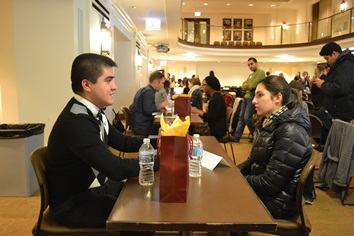 Thirteen communication professionals, four of them Loyola alumni, were spread across Lewis Towers’ Regent’s Hall Tuesday night. The workshop began with a panel of alumni doling out advice, and then transitioned to a more intimate one-on-one setting so students could get direct feedback on their résumés and cover letters.

After a few of these eight minute tête-à-têtes, junior communication studies major Tony Buitrago said he knew what he skill he had to polish before next week’s Career Fair.

“I definitely want to work on networking,” Buitrago said. “People care about who you are and what drives you.”

One student took that advice to heart. As soon as the opportunity presented itself, junior advertising and public relations major Juan Perez made a beeline straight for an alum who works at the Chicago advertising firm Leo Burnett.

“Don’t be afraid to reach out to people,” said Perez, who went on to say that he hopes to work for the same firm when he graduates.

Perez has been attending these career week events since he was a freshman.

“I progressively get more prepared each year,” he said.

But students weren’t the only ones looking to make new professional relationship.

Abby Kleckler graduated from Loyola in December 2012. The former president of Loyola’s Society for Professional Journalists now works as an associate editor for Scranton Gillette Communications. Kleckler said it was both strange and awesome to be back at Career Week.

“I remember talking to people and making connections,” said Kleckler. “I was excited to maybe be that person for someone.”

As it turns out, Kleckler was a good touch point for her one-time classmate and fellow journalism major Yun Tai. In the past, Tai said all the advice he received during Career Week helped him land an internship with WTTW’s Chicago Tonight.

After graduating last December, Tai took some time off to visit Japan. Once he returned to Chicago, however, Tai said he knew he had to square away his future.

Kleckler showed him the importance of targeting his potential employer through his résumé.

“It’s important to change your résumé for every employer,” said Tai. “You have to make your résumé stand out - be more aggressive with it.”

As the workshop came to a close, a few students and professionals straggled in the hall, swapping business cards and stories.

“My favorite part is each night, right when they end,” said McPhilimy of the Career Week workshops. “That’s where the students tell me they’re all fired up for the next step.”

And the next step is coming up soon. The SOC Career Fair is Tuesday, February 4 from 3 p.m. to 5:30 p.m. in Corboy Law Center’s Kasbeer Hall.