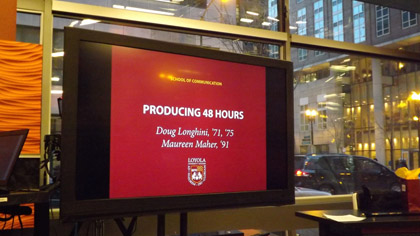 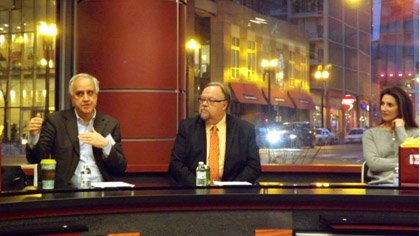 Two Loyola alumni now work together at CBS News to produce 48 Hours, a show which investigates crime and justice cases.

On February 24th in the SOC’s Convergence Studio, communication alumniDoug Longhini ’71, ’75, and Maureen Maher ’91 gave a behind the scenes look into producing 48 Hours.

Longhini has worked exclusively for 48 Hours since 2000, and has covered notable cases including those of Michael Jackson, Princess Diana, and Amanda Knox. Maher joined 48 Hours in 2003, and was previously a correspondent for CBS News.

Longhini and Maher shared what goes into producing each episode by discussing a number of stories on which they worked together.

Each episode begins with a two to three minute opening that doesn’t have narration, just natural sound to create a setting. Longhini said that one of the challenges they face is finding visuals to support an hour-long show. They do not hire actors or remake scenes, but rely on original footage and interviews. “It always starts with people…if we don’t get the people talking to us, we don’t get the story,” he said. Before they even pursue a story, they utilize the relationships and access to law officials, videos, and subjects connected to the case to interview.

Longhini noted that the research skills he learned from Loyola have remained with him throughout his career, “it’s probably who I am. This job is fortunately an extension of who I am, so I’ve been lucky that way.”

Maher discussed the importance of talking to everyone involved in a case, from people who knew the victim to the defendant and his attorney, in order to present the most objective story. Sometimes subjects may expect their story to be told from their perspective after being interviewed. Longhini said, “if both sides didn’t like the story, that’s actually not a criticism for us … it shows it’s balanced.” The guiding force behind interviews and the show is asking the question “what does the viewer want to know?”

Maureen also stressed the importance of taking time to cultivate relationships with people they choose to interview, and said that it can sometimes take months to do so. She said “I will conduct a 3 hour interview if that’s what I think that person needs to feel comfortable… and the first hour [might be] a waste but the next two might be amazing.”

She gave an example of when she interviewed Jody Arias. What she initially thought would be an hour-long interview turned into four or five hours. “She just wanted to talk, talk, talk, which was her ultimate undoing.” Maher said.

She noted that in terms of storytelling, you want to get to the truth, but part of that is the journey of digging for it. “If I called her [Arias] on every ridiculous thing she was saying, the interview would have been over early.” Maher said that for as much preliminary research you may have done, “you never know where the interview will go and you have to be ready to ask questions on the fly.”

Maher credits her time at Loyola with giving her the skills to get through tough interviews. She especially appreciated “the joy of taking theology courses.” She said that “having the ability to explore spirituality and faith in many different ways… has been instrumental in my life as a journalist.”

Lydia DeCoud, a senior journalism major, appreciated how Maher went into detail about the hard work, including many late nights and lots of travel, that it takes to break into the broadcasting field. “I thought it was good to come and hear the realities, the good, the bad, how the bad can turn into the good.” 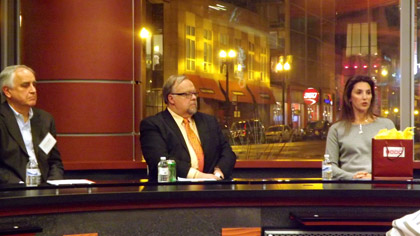 Maher has had to interview people who have been accused of horrible crimes. “I find that it helps a lot to remember that we’re all human beings… and I have to find a connection.” she said. “All of these people, at some point in their life they took a wrong turn…and I kind of find it my mission… to find where was that moment where they turned off the road. That’s the only way I can get through talking to these people.”

She makes it a point to look at the crime scene photos, and said that this helps her to remember that it’s not just a television show, but a case as well. She said some of the cases can even change if they do a story the right way.  “Though we look formulaic, I think we strive on every case to bring something individual to it, and a different perspective to it.” Maher said.