Dr. Gilda Parrella, a professor, researcher, and activist, is retiring from Loyola University Chicago’s School of Communication after a teaching career of over 40 years. Among her many accomplishments, she has been instrumental in developing the peace studies program at Loyola. Outside of campus, she is an active leader in a number of organizations that are interested in civil liberties and peace movements.

She began teaching at Loyola in the fall of 1973 as an assistant professor, and her career has greatly evolved over the years. The first course she taught was oral interpretation of literature. She has a master’s degree in theater, and a PhD in communication, but said she had always been interested in peace issues.  She has been involved in many peace and anti-war movements, starting in the 60s during her graduate studies. At Loyola, she developed a proposal to start a course in conflict management, which was funded by the Carnegie Mellon Foundation. From there, her curriculum contributions grew to include courses in mediation, negotiation, conflict and media, and special topic courses on transformative mediation. 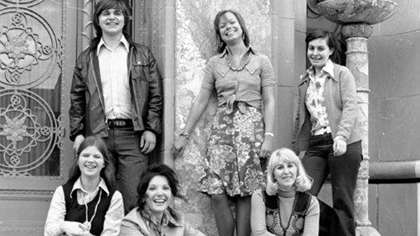 “Loyola is quite an amazing place,” Parrella said. Initially, she wasn’t sure if she would find her place at the school.  “I didn’t know how tolerant they would be to my form of activism,” she said. She found that Jesuits engage in forms of compatible activism too through education and sometimes civil disobedience.  She said that there is a much greater emphasis on social justice issues now on campus than when she started teaching. “We kind of evolved together in that way,” she said. “I think now courses in social justice have become much more prevalent in the curriculum.”

At one point, she took a leave of absence to see if she wanted to pursue a law degree, and she also did work in human resources. She said that after a year, she realized that her first love was education, so she returned. “The best place for me to be was here at Loyola,” she said.

Her activism work outside of the classroom allows her to provide real life examples in her courses. “I have done a lot of things in my larger life that have always been complementary to the work that I do in the classroom,” said Parrella.

One of the peace efforts she is most proud to have been a part of was an online attempt to get representatives from the UN to initiate a meeting of the General Assembly to stop the invasion of Iraq in 2003. “It was amazing to see how many people you can reach throughout the world online,” Parrella said. Even though the effort was unsuccessful, Parrella said “It was enlightening, and it was encouraging to think that we could make some connections with people throughout the world who had a very similar purpose.”

Olivia Hedstrom, a senior communication major with a concentration in advocacy and social change, took Dr. Parrella’s conflict management course. “Because she’s such an expert in that field, we really covered a ton of ground and were able to understand what conflict management looks like from a theory scale as well.  Our term project was to apply all the theories we learned to a particular case study.”

Hedstrom said that Dr. Parrella is focused on negotiation, so much so that students even negotiated the terms of their own syllabus, first with each other and then with her. “I’d never done that in a class before. Her willingness to teach through letting us … have an input into our own learning and how the class was conducted was really refreshing,” Hedstrom said. “She really cares about students and not just how they’re doing in terms of their grade in the classroom, but how that’s affecting their overall life.”

Tom Schuba, a senior communication major, has been working on an independent study overseen by Dr. Parrella. He has been writing a TV pilot, and said Dr. Parrella has helped him learn how to market his skills. “She gave me really good advice…she pushed me to think about different things critically.” Schuba has also taken conflict management with her, and appreciated the variety her course offered. “She structured the class in a way for all types of students to be successful,” Schuba said. “You can tell that she’s very engaged and that she wants to be there.”

Both her students and colleagues spoke of her sense of humor. “She was always cracking me up,” Schuba said. “She has a terrific sense of humor and adventure about her,” said Dr. Bren Murphy, a communication professor. She said that Dr. Parrella’s passion for consensus building extends outside of her conflict resolution course to her interactions with School of Communication faculty. “She didn’t just teach that course, she tried to get us to avoid conflict,” Murphy said. “She was very big on…not seeing conflict as bad…but she did believe very strongly that we should try to work through differences and see if we could come to some sort of mutually agreed upon solution.”

Parrella has always been a traveler. Throughout her career, she has developed connections all over the world. In 1990, she went to the Soviet Union to hold conflict workshops in Kiev, Leningrad, and Moscow, during the beginning of Glasnost; this is just one of several trips she made there during that decade.

She plans to continue traveling, and locations such as Venice, Zurich, London, and Costa Rica are at the top of her list. “I don’t like the word ‘retirement,’” she said. “I haven’t got it all figured out yet, but I think I will continue to do much of my activism work with social causes and with social justice issues.” She also plans to return to teach occasionally and will share an office with a colleague in the SOC.

Don Heider, the dean of the School of Communication, remarked: “Professor Gilda Parrella has been an amazing colleague who always brings tremendous integrity to whatever she does. She is well regarded by her colleagues, and for the past four decades has touched the lives of innumerable students.”

“I think I will always keep connected in some way,” Parrella said. “I really don’t see it as a goodbye; I see it as a shift... I will be doing some work continuing on projects that are compatible with the university’s mission and my mission.”

She said that there is still a lot to do, even when she won’t be in the classroom. “I will be continuing all the causes that I’m interested in, and hopefully continue to make a contribution.”

More information on the event can be found here: http://bit.ly/1doravA