Suit Up: Tailor Yourself on a Student Budget 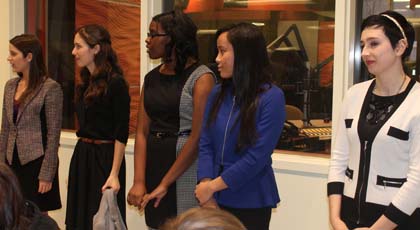 The saying, “Don’t judge a book by its cover,” doesn’t apply to job interviews, and five students went through wardrobe makeovers just to prove it.

“People are making judgments about you as soon as they see you,” said Cheryl McPhilimy, director of internship and career services for the School of Communication (SoC). “Before you even open your mouth, before you slide your resume across the table or they pull it up on the screen, they’re making judgments.”

Because of this, stylist Nancy Plummer transformed five students’ wardrobes and showcased their makeovers Thursday, Jan. 31, at the SoC event, “Shut Up, Suit Up: Tailor Yourself on a Student Budget.” Each of the students’ new outfits cost less than $130 and included many staple items that Plummer said could be mixed and matched to create more than one look.

“Find that … vendor where you can find those key basics,” Plummer said. “Those will last a longer time and you can build upon [them] with less expensive pieces.”

Junior Gillian McGhee received a makeover on a budget in order to transform her look from concert-goer to interview-ready. “I’ve never been into the corporate business look,” said McGhee, a journalism and anthropology double major. “I have a diet of punk rock. Even though I’ve toned it down, I still like band shirts, Converse and Vans and that’s my wardrobe.”

McGhee currently interns with The Morning Amp at Vocolo.org, a radio station that also airs through Loyola’s WLUW. Because of her internship, though, McGhee decided it was time to get serious about her professional appearance. 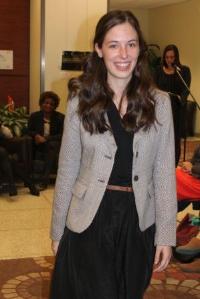 ‌“Even though $80 is more than I would typically pay, if you have one piece that is going to last you seven to eight years, then you can start layering with cheaper pieces,” McGhee said. “Splurge on one or two pieces that will really last.”

While McGhee’s transformation will be put to use immediately at her current internship, other students applied for makeovers in hopes of nailing an interview in the future.

Junior Keshia Bardney, a journalism major, has two interviews lined up this semester with ABC7 and WGN-TV, and said she needed a look that could combine professional with personal. “I want the perfect type of clothes to show that I’m a serious journalist, but also reflect that I’m flexible and quirky and have a good personality,” she said.

Bardney got a new black dress with a checkered design along the left side of it. The dress cost $55 at the Nordstrom Rack. “The pattern is a fun [and] spunky look, but keeps it professional,” Bardney said.

Freshman Nicole Camacho is searching for a semester work-study job and a summer internship, and said she applied for the makeover to learn more about dressing in a way that is appropriate for a work setting. For her makeover, Camacho got a black dress from the Nordstrom Rack and a blue peplum blazer from New York & Co. for about $100. ‌ 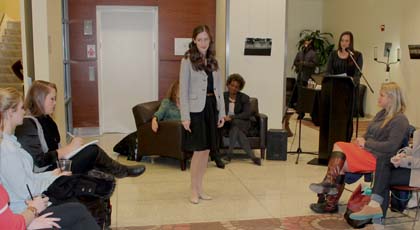 I [didn’t] really know what to wear to job interviews,” said Camacho, a communication studies major. “This is a start to a more professional lifestyle. I will be more prepared in the future when I continue to apply for jobs and internships.”

Alumna Dene Brown is proof that the SoC makeovers help get students noticed at job interviews.

She received a makeover in spring 2011 and had an interview lined up the next day. Brown wore her makeover outfit – a blazer suit with a blouse underneath, hose and black low pump shoes – to her interview with Tonic Blue Communications, an ad agency in Mount Prospect, Ill.

A week after the interview, she found out she earned a 10-month internship as a research analyst.  “It really prepared me for the interview,” said Brown, who graduated in December 2012 with a degree in advertising and public relations. “It was my first serious interview for a job in my field and [the makeover] just gave me confidence to go into it.”