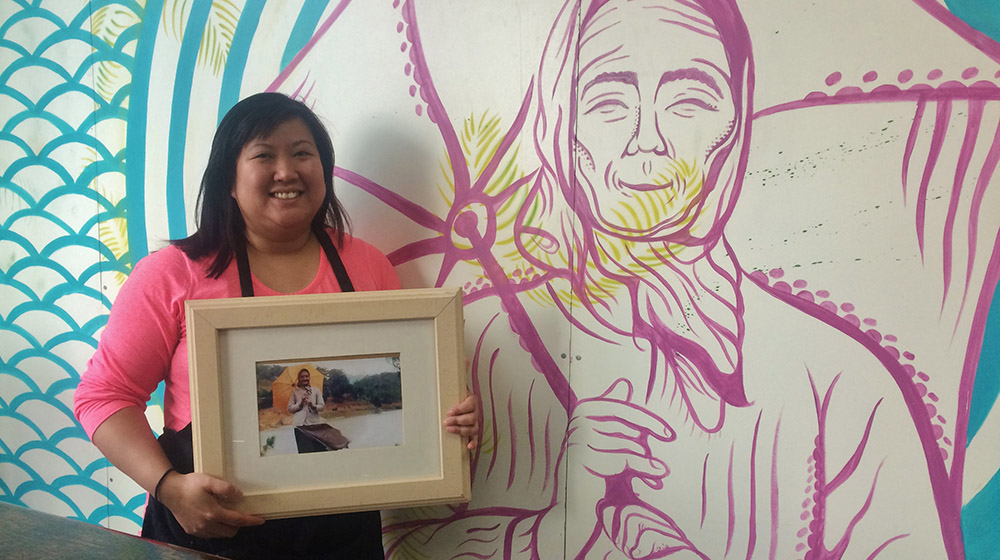 For Loyola School of Communication alumna Amy Le, a chef and owner of the downtown eateries Saucy Porka and Spotted Monkey, working with food is a family tradition.

That’s reflected by the vibrant mural filling one wall in Saucy Porka, based on a photograph of Le’s grandmother who sold produce in Vietnam. It also comes across in the restaurant’s namesake pork, which is prepared the way Le’s mom used to make it when she was a kid.

“We’ve always been really connected to food in my life and my family, and so that’s been passed down,” said Le, who is also a former owner of the Duck N Roll food truck.

Le grew up in St. Louis, helping out in her mother’s Chinese restaurant. Despite her desire to take a different path when she went on to attend Loyola, she could never seem to stray far from those roots.

While pursuing a degree in journalism, Le worked at Flat Top Grill and Koi Chinese & Sushi Restaurant, and she’d regularly feed hungry students in her dorm using the rice cooker and pasta steamer her mom sent with her. Naturally, the cuisine is what she remembers most from her two months abroad in Tanzania.

But Le persisted in developing her talents outside the restaurant industry.

She found success doing freelance writing and working as a general assignment reporter for the Pioneer Press, a newspaper then owned by the Chicago Sun-Times’ parent company. She earned recognition for getting the scoop on a Northwest Side homicide.

“I really wanted to be a reporter. I wanted to make sure I knew I could do it and feel like I fulfilled that dream,” Le said. “The last year I was there, I got nominated for a Lisagor Award [for Excellence in Reporting]. So, I said, ‘OK I can walk away.’”

Le moved on to marketing and social media positions, but in 2009, she found herself back in the culinary world; an online food-ordering startup called GrubHub hired her as a social media and PR manager.

At GrubHub, Le connected with restaurant owners and food bloggers on a daily basis, and she volunteered to set up staff lunches just for fun. Le also gained mentors who taught her about the backbreaking work involved in entrepreneurship.

“The GrubHub founders, Matt and Mike, who I worked really closely with, would always say to me, ‘If you take your hobby and you want to make it [your career], it no longer can be your hobby,’” Le recalled. “‘You can’t just dabble in it. You either have to just go 100 percent into it or not do it at all.’”

That advice was in the back of Le’s mind when the restaurant owner she’d worked for in college presented the idea of opening a food truck together.

They launched the Duck N Roll food truck in October 2011, serving items inspired by Asian street food. Le discovered that it was a seven-day-a-week, around-the-clock job.

She spent half her time running the operation – often starting her days at 6 a.m. and securing a location around 8 a.m., then selling food and packing up within the city’s two-hour parking limit. The other half she spent fighting that time restriction and additional constraints on mobile vendors.

With what she called a social justice influence from Loyola, Le co-founded the Illinois Food Truck Association to push for more feasible regulations.

Although the city eventually did allow cooking on the vehicles, Le said, she was exhausted. She made the tough decision to shut down the truck after one year.

“I gave myself three weeks to feel miserable about shutting the truck down and feeling like I had not succeeded in that,” Le said. “But then you have to pick yourself up and move forward again.”

She said that resilience was inspired by her parents, who fled Vietnam in a fishing boat after the war with 2-year-old child and her mother eight months pregnant.

Just months after Duck N Roll closed, an investor Le had met while running the truck told her about vacant space in the financial district. It was the spot where she would open her first brick-and-mortar restaurant, Saucy Porka.

“When we launched, I didn’t know if people were going to walk in … The first day, I remember, there was a line. That was one of the most amazing moments [when I felt] like, ‘I think this is going to work out.’” 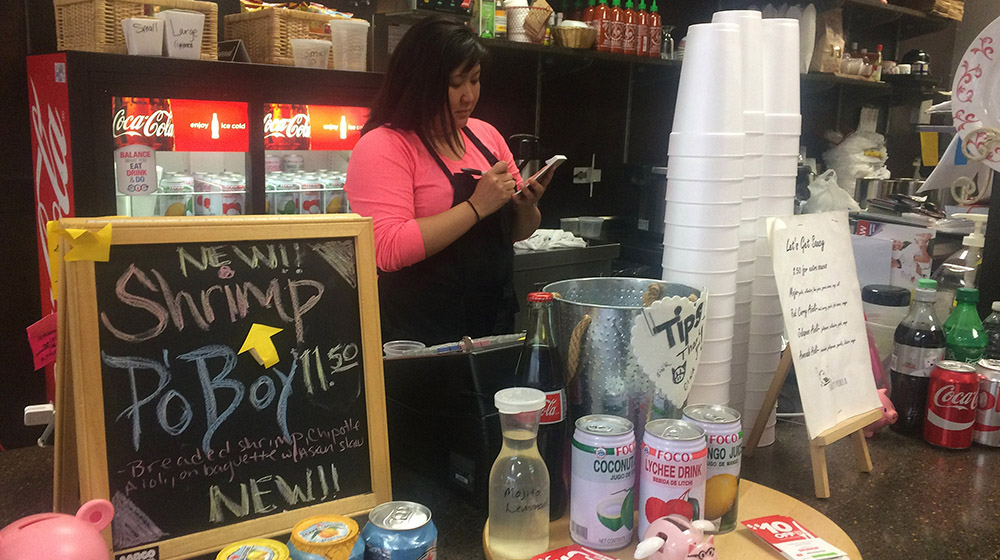 “Saucy Porka is always my number one place where I want to go,” said Haffarnan-Buck, who works in the Loop. “All their meats, I feel like they marinate literally [from the moment] they turn the light on in the morning.”

Since establishing Saucy Porka, Le has cut the ribbon on a similar Asian-fusion restaurant nearby called Spotted Monkey. She co-owns both with her boyfriend, John Keebler.

Le’s career path has had its ups and downs, but as always, she isn’t finished yet. She said she aspires to open Saucy Porkas in every city and eventually start a job training cooking program.

For now, a typical day for Le involves leaping up to help customers the moment they walk through the door.

It’s a dedication that doesn’t go unnoticed – especially not by Christina Ohanian, a class of 2010 alum who visited Saucy Porka two years ago and still remembers the special interaction she had with Le.

“She came over and started talking to me because I had a Loyola sweatshirt on,” Ohanian said. “You just don’t get that sort of personal touch in a lot of places anymore.”

Le said leaving an impact on her customers and her staff, who she considers family, is the most rewarding part of running two successful businesses. That outlook naturally stems from the significant influence her upbringing has on her cuisine.

“Something that I’ve carried with me from my childhood into my adulthood as a business owner is the family aspect of it … Seeing and reading and knowing people’s needs, that’s a huge part of why I love this business,” Le said. “Food, to me, is so much about love and connecting with people.”