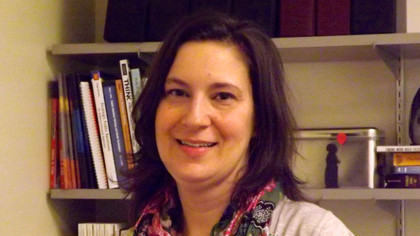 Being an instructor, the director of internship and career services, and heading a PR firm may seem each seem like full-time occupations, but the SOC’s Cheryl McPhilimy manages to do all three. She has been with Loyola since 2006, and is the president of McPhilimy Associates, a public relations and executive spokesperson coaching firm she founded in 1995.

At her PR firm, McPhilimy had hired several Loyola students as interns and full-time employees. “Consistently they were our firm’s favorite interns,” she said, so when Loyola approached her with the possibility of being the first adjunct PR instructor, she was excited to accept the position.

From there, McPhilimy’s role at Loyola grew to include becoming the director of internship and career services. McPhilimy engages with employers and helps students who come to her for advice when applying for internships and jobs. Before starting McPhilimy Associates, she had worked across several communications fields, including an ad agency, The Daily Herald, and other PR firms.

She said that the most rewarding part of her job is working with students. Because of her dual role as instructor and internship director, she gets to see students develop in different capacities. She loves seeing the individual successes of students, such as when a project they’ve worked on comes full circle or when they find their first job.

She particularly appreciates the development of Career Week over the past few years. She said that the caliber of professionals who attended events like the Career Fair or the panels is exactly what she had hoped for. While discussing resume night, McPhilimy said, “I love looking out and seeing 30 students, …[and] 30 really fabulous industry professionals and the interaction that’s happening between them.  That thrills me to the core.”

At her PR firm, she assists senior leaders of corporations and non-profits on communication strategy, messaging, delivery, and media training. Working at both her own firm and Loyola has several benefits. “I love both aspects of my life a lot, and I think they each actually make me better at the other.” McPhilimy said. Her real-life experience assists her in the classroom, and her vast knowledge of the communications industry in Chicago allows her to connect employers and students. She has also taken Loyola students on as interns and hired them as employees after they graduate.

She said that it’s exciting to see the transition from student to professional.

“It keeps you really in touch with what you love about the work you do when you see someone joining your field.” she said.

Erin Clark, a 2009 Loyola grad, had McPhilimy for Introduction to Public Relations and went on to intern at McPhilimy Associates. She currently works for the Art Institute in the graphic design, digital communication, and communication departments. She recalled in her class with McPhilimy they had to put together a media plan for a real-world client, putting theories into actual practice. “That class was an eye-opening experience for me.” Clark said. She used a project from it to get an internship at the Goodman Theater, and later went on to work there full-time. Now Clark has her own interns, and she refers them to a book McPhilimy wrote, “Public Relations: It's Not Rocket Science.” “It’s a book that I still have and I have referenced it with my interns and my career.” she said.

Kristin Trehearne Lane, a 2011 grad who is now a communication specialist at Loyola, also had McPhilimy for Intro to PR and interned at McPhilimy Associates. “Cheryl certainly developed me into being the professional I am today.” she said. “I will 120% give her credit for everything I am capable of doing in the PR field now.” Lane also appreciated the real-life experience she gained from having a live client in the classroom setting. She found this real-life experience when interning for McPhilimy. “She fully expected that she’s paying these interns to be part of their team, that they’re going to add value,” Lane said. She appreciated how much ownership McPhilimy allowed students to have over their own projects, and said it empowered her to grow in her own career path.

Lane said she still finds McPhilimy’s work inspiring: “Cheryl has a way of moving about the professional world that I really admire.” she said. “Seeing a woman be able to take the Chicago business scene by storm is really inspiring.”

When asked how she balances her various positions, McPhilimy responded that she would rather be “ultra-busy.” “I have a big bandwidth and I’m happiest when I’m throwing myself at a lot.” she said. She also joked that she doesn’t keep houseplants. “I like working with students tremendously, I like that the faculty and staff here have the students’ best interests at heart… I like the Jesuit influence, the vision, the atmosphere, so for me it’s incredibly rewarding to be part of what’s happening here.”

McPhilimy’s investment in her students and her work is clear to anyone who interacts with her. “I think there are a lot of people, specifically in communications, who are so self-absorbed that they forget about the people around them, but Cheryl is a very communal person, and I think that’s probably why students gravitate towards her.” Lane said. “She lifts people up who are around her.”