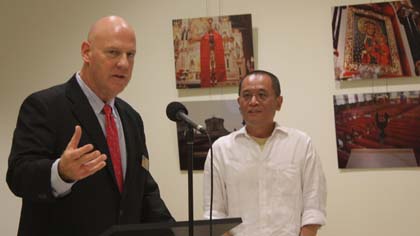 Students have been able to view journalism and art projects in the halls of the School of Communication since 2010, but this is the first semester that they may spy some of their own work on display.

The Chicago Church Project, which opened as a photo exhibit on Sept. 25, was a collaborative project between Loyola professors’ John Slania and Jamason Chen’s classes in spring 2012.

“Typically our exhibits have been from artists or curators outside the university, but I thought it was important we highlight our student work,” said Event Coordinator Meghan Ashbrock. 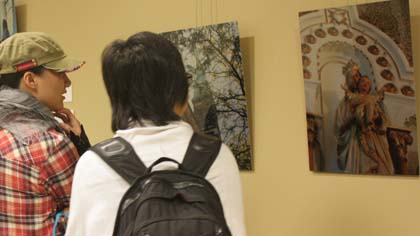 Slania was inspired to create the Chicago Church Project when he visited St. Michael’s in Old Town at Christmastime. He recalls the beautiful statues and ornate windows, but also the peeling paint on the ceilings.

“There’s a lot of history here, but a lot of challenges too,” said Slania, “These historic churches tell the history of Chicago.”

Many of these churches are aging and need millions of dollars to return them to their original condition, said Slania. Some of the churches are in neighborhoods that have changed dramatically over the years and have seen large demographic shifts.

“These churches remain the cornerstones of these neighborhoods,” said Slania.

Slania hoped the project would engage students directly in the community and draw attention to the struggles that some historic churches are experiencing.

“It inspired positive change by publicizing and drawing attention to these remodeling efforts,” said Slania.

Chen saw the Chicago Church Project as a way to bring the current image of these churches together with their historical roots. He also viewed this as a way to teach his students about the importance of collaboration in journalism.

“I took my class to visit the Tribune and they mentioned that journalists need to be able to work in multimedia formats and work on teamwork,” said Chen.

Though he acknowledges students often don’t want to or can’t find the time to work together, Chen thought it was important for student photojournalists to be aware of the reality of collaboration in the working world.

“How do you coordinate with the writer to your benefit?” said Chen.

The project also pushed students to create stories on multiple platforms. The photos, videos and stories are featured online as well as in the exhibit.

Chandler West, who graduated from Loyola in 2012, was featured in the exhibition for his photos of St. Alphonsus in Lakeview. He now works as a freelance photographer for the Chicago Sun-Times.

“It was definitely a pleasant surprise when I got the e-mail,” said West, “I hardly ever print my photos, so it’s nice to see them hung up.” 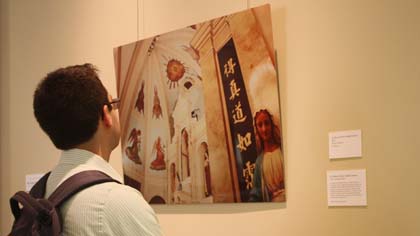 Chen thinks the exhibition gives students and alumni a chance to see their photos and stories as real journalism and not just schoolwork.

“When the first print came out, I thought the students will be proud of their work,” said Chen.