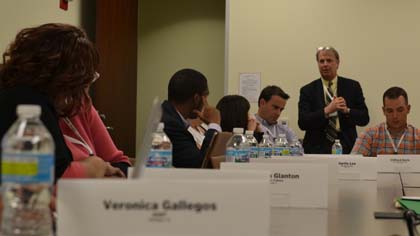 Following the mass shootings in Aurora, Colo. and Newtown, Conn., as well as the proposal of several gun laws, the issue of gun coverage is a hot topic in the U.S.

In an effort to provide journalists with better training and background to cover this issue, the School of Communication (SoC) hosted a three-day conference April 1-3 in partnership with the Robert R. McCormick Foundation and The Poynter Institute.

“After the shooting at Sandy Hook [Elementary] School, as I was watching the news, I became increasingly anxious about wildly inaccurate reporting about guns,” said Al Tompkins, The Poynter Institute’s senior faculty for broadcasting and online. “So we started a conversation here at Poynter, because it seems like we need to have some kind of way to wrap our arms around this issue of guns.”

The conference, called “Covering Guns: A McCormick Specialized Reporting Institute,” was held in SoC room 222 and with about 28 journalists from around the country attending. 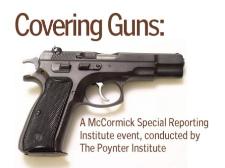 “We took a cross section of geography, of medium, of market size and experience,” said Tompkins, who was one of the hosts of the conference. “We tried to pepper the conference with a wide range of people so that we’d end up with a diversity of ideas and experience.”

Although attendance was limited, the conference was live-streamed via the School of Communication on Poynter.org and complemented by a live-blog and a moderated chat throughout the days’ sessions.

More than 10 sessions featured a variety of speakers – from experts on the Second Amendment to investigative reporters to directors at The University of Chicago Crime Lab – who worked to better educate journalists in the realm of guns and gun coverage.

“Journalists are opinion molders,” said Robert A. Levy, chairman of the Board of Directors at Cato Institute, a public policy research organization. “I think it’s self evident that they will function far more effectively if they are well-informed, and that means being exposed to a range of views on this topic that would give them some background. Without being exposed to expert opinion, it’s unlikely they will be well-versed in these issues.”

Levy held two sessions on the first day of the conference: “Anatomy of a Lawsuit: Behind the District of Columbia v. Heller” and “Gun Control in the Aftermath of Newtown.”

Levy’s second session helped journalists understand the various gun control proposals that are currently being debated, including the ban on high capacity magazines, the reinstated ban on assault weapons and the extension of background checks.

However, Levy noted that random mass killings, such as the massacre in Newtown, only account for less than one percent of the gun violence in the U.S. He added, “The real violence is that which takes place every single day in most of the big cities in the U.S., and most of that is related to the drug trade.”

Similar importance was placed on understanding the daily violence in the U.S. during the second day of the conference.

Roseanna Ander and Harold Pollack, founding executive director and co-director, respectively, of The University of Chicago Crime Lab, detailed this in their session, “What Journalists Should Know About Who, When, Where, Why People Get Shot and What Might Work to Stop It.”

This statistic, along with several others, was examined throughout the course of their session. Along with showing data of gun violence and gun statistics in the U.S., Ander and Pollack focused on the connection between youth and homicides, explained terminology of different weapons, defined homicide rates and advised journalists on how to better report on these issues.

“Firearms provide the distinctive reason why the U.S. endures a higher homicide rate than peer nations,” Pollack said. “Proliferation of firearms causes more homicides … Many homicides wouldn’t happen if a gun wasn’t present at that moment.”

However, in reporting on homicides, Ander and Pollack advised journalists to do two things: report homicide rates, not just the raw number of homicides, and contextualize the reporting.

Not only is understanding gun crimes important, but understanding where guns come from is also an important step in reporting on this issue, according to David Fallis, investigative reporter at The Washington Post. 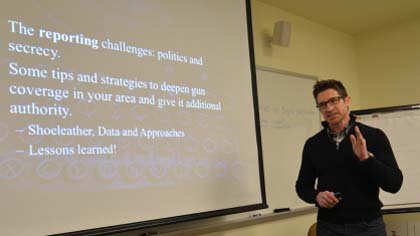 During Fallis’ session, “The Secret Life of Guns,” he advised journalists to trace the “paper trails” left by guns and to identify patterns in gun trafficking.  “The reality is that reporters get so used to writing about crimes as they happen that they don’t really step back to think, ‘Where did all the guns come from?’” Fallis said.

He added, “If a gun is sold and shows up in a crime in a matter of months, that’s a huge red flag for gun trafficking. Those are the kinds of things that reporters can ask their police departments about.”

However, like other speakers at the conference, Fallis said there are challenges to gun coverage.

“I think part of the challenge is that gun coverage becomes two-dimensional, but it’s multi-layered and very nuanced,” Fallis said. “What I see sometimes is that the gun coverage tends to fall into cliché coverage – it’s sort of like bad medical coverage where everything is either going to cure or kill you. Things get presented in a black and white two-dimensional manner.”

Fallis said another challenge is the fact that reporters don’t know the differences between certain types of guns, such as a revolver and a semi-automatic handgun.

In order to help the attending journalists better understand the physical attributes and the power of guns, the conference included a session called “Guns 101: Gun Types, Ammo, Myths,” as well as a trip to a gun range on the second day of the conference.

“In our experience, the journalists who cover gun stories have never even held a gun,” Tompkins said. “[The gun range was] a way of de 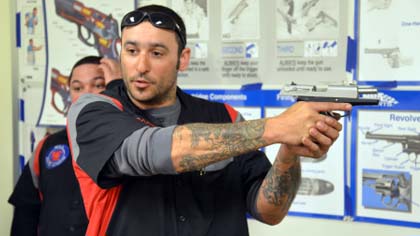 mystifying what guns do and don’t do.”

Caitlin Dineen, nighttime police reporter at The Fayetteville Observer in North Carolina, attended the three-day conference and also went to the gun range.

Dineen said she covers crime in Fayetteville, N.C., on a daily basis, but found out how terrifying guns are when she went to the range.

“I was all but crying at the range,” she said. “[The guns] seem so small and simple for what they can do … It’s terrifying what destruction can be done.”

A discussion about the journalists’ experiences shooting at the gun range introduced the conference’s final day of sessions Wednesday, April 3.

Several attendees explained that they felt the power of guns when they were at the range, including Katherine Rosenberg, a public safety reporter at the Corpus Christi Caller-Times in Texas.

‌Connecting her experiences with what was discussed at the conference about youth and violence, Rosenberg added, “Children don’t understand that power. They don’t comprehend the value of human life.”

Craig Smith, a reporter for KGUN-TV in Arizona, said, “I think to a lot of people, [having a gun] is a do-it-yourself empowerment tool.”

However, while this may seem true in the U.S., not all countries have the same gun laws that give citizens the right to keep and bear arms, or allow them to conceal and carry weapons.

Joyce Lee Malcolm, a professor of law at George Mason University, explained this in her session, “The Global Gun View: What Journalists Should Know About How Other Countries Treat Guns.”

Malcolm described in-depth the differences between gun laws in the U.S. and those in other countries, such as England, Canada and Australia.         “We’re still referred to as the ‘cowboy country’ by others,” Malcolm said. She added that America’s gun culture is an important factor in this perception.

Although other countries – specifically England – have strict gun laws, Malcolm opposed the idea of gun control and restricting citizens’ rights to bear arms, because she said all that does is disarm the people who are not going to use the guns harmfully in the first place.

In reporting any information about guns, though, it is important for journalists to remember the facts, not just speculation, according to Bill Adair, creator and editor of PolitiFact, a project operated by the Tampa Bay Times, which fact-checks statements made by politicians, lobbyists, interest groups and others.

Adair’s session, “Testing the Truth About Gun Claims: The PolitiFact Way,” examined approximately 140 claims that have been made about guns. “The most frequently heard comment since Newtown has been the claim that 40 percent of gun sales occur without background checks,” he said. “We have rated the claim half true, because it’s based on really out-of-date data – it’s not a current number.”‌

Like many of the speakers at the conference, Adair stressed the importance of journalists giving information and data context, and truly understanding the background of the issue in order to better report it. 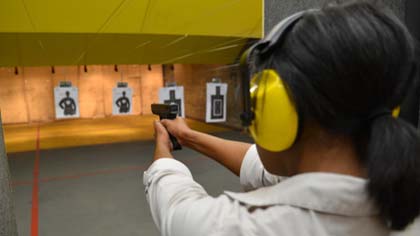 “I hope that we will see a palpable difference in the quality of reporting around this subject,” Tompkins said.

After attending the conference, Dineen said it was “exceptionally informative,” giving her the right questions to ask when approaching future stories about guns.

“I have a whole field and host of questions now that I never would have thought to ask,” she said. “It’s taught me everything.”

More information about the conference can be found at Poynter.org and CoveringGuns.com. Poynter will hold a second Covering Guns conference in the Washington, D.C., area July 10-12.