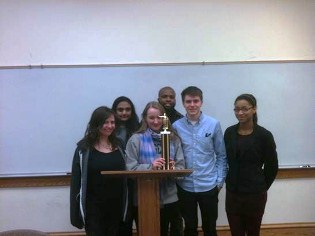 Loyola senior Phillip Kraft and first year student Megan Nubel have accepted a first round invitation to attend the National Parliamentary Tournament of Excellence. This marks the fourth consecutive year that a team from Loyola has received a first round bid. Last year, Kraft and his partner Joe Carroll went on to place 13th at the event. “I am really proud of the great job Megan has done with Joe studying abroad this year,” Kraft noted.  The event will be held March 15th-18th at Northern Arizona University.

The duo recently competed at Wheaton College where they advanced through the preliminary debates with a 7-1 record to qualify for the single round elimination debates. They advanced to the eventual final debate round where they were defeated on a 2-1 decision. Loyola’s team received the 2nd place sweepstakes award and Phillip Kraft and first year student Dara Davis were singled out for individual speaking honors.

Next up for the Ramblers is the National Warm-Up debates which will be held at Loyola’s Water Tower Campus February 14th-16th. Several of the top teams in the nation have signed up for the competition including schools from Louisiana, California, and Texas.