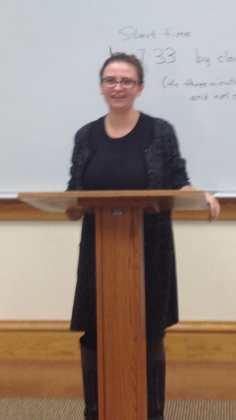 The Rambler debate team capped an excellent first semester with a victory at the Holtz-Larsen Debate Tournament, held at Wheaton College on November 7th and 8th. Second year debaters, Megan Nubel and Lucia Bennett, were 6-0 in the preliminary debates and advanced through Octo-finals. They clashed in the finals with a team from Cedarville University on the topic “The United States Federal Government should ban unpaid internships”.  Megan and Lucia were also singled out for individual speaking honors with Megan being named the top speaker at the event.

The duo have advanced to the elimination rounds at all five tournaments they have attended this semester. Megan and Lucia have secured a first round bid to the National Parliamentary Tournament of Excellence, which will be held in Kansas City this March. They will join their teammates Dara Davis and Hiba Sheikh who have also earned this honor.