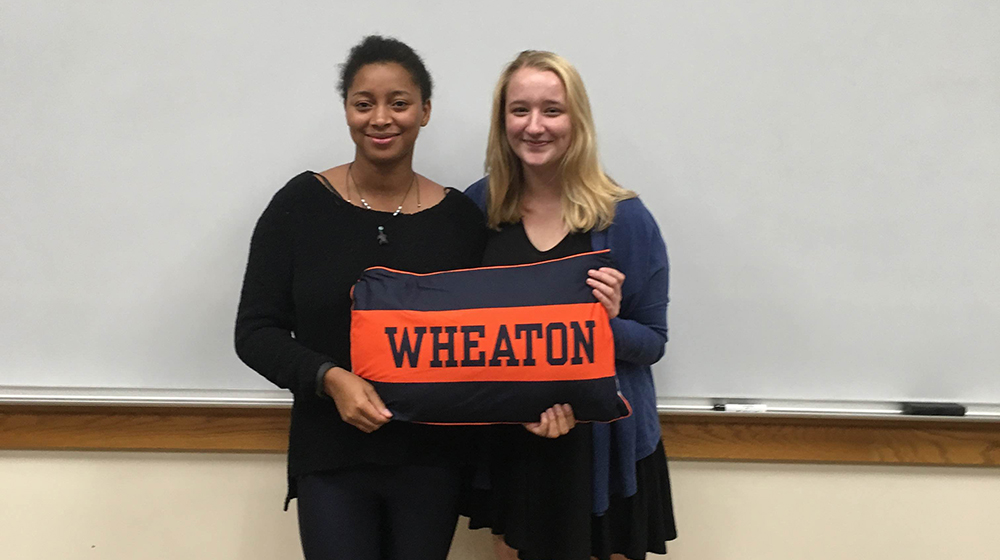 Based on their witty banter and occasional finishing of each other’s sentences, Loyola seniors Megan Nubel and Dara Davis would make great leading characters on a kids’ sitcom.

But their compatibility and charisma is already being put to good use. The pair will compete at the Oxford Inter-Varsity Debating Competition, an international collegiate debate hosted by London’s Oxford Union, November 11-12.

Debating at this level is no small accomplishment; the prestigious competition draws top universities from all over the world.

“Being chosen to go to this competition is super important for Loyola,” said Davis, before she paused to discipline herself for overuse of the word ‘super.’ Even in colloquial conversation, the debaters work to groom subpar language out of their speech.

Davis explained that they both have phrases that they subconsciously latch on to, hers being “super.”

“Mine is ‘perpetual,’” admitted Nubel.

“Sometimes we’re not looked at as a big school or competitive enough for the international level,” Davis continued. “But we are up against Yale, Harvard—all these elite schools. And I think we have a high potential of being really successful.”

David Romanelli, who is in his 20th year of coaching the Loyola debate team, selected Nubel and Davis to compete for their skills and dedication to the team.

“Megan has had an outstanding run at Loyola. She is fearless,” he said. “Dara works hard and tries to help everybody else out. She has already reached out to the crop of first year students to help them improve.”

But he also recognizes what a strong team they make.

“They work well together and they work hard,” Romanelli said.

Their chemistry is invaluable during the short 15 minutes competitors are given to structure their arguments. During this time, they must agree on main points to discuss while trying to be as creative and nuanced as possible with their approach.

“You have to rely on a lot of background knowledge. Most of our research just happens daily—like staying up to date on what’s happening in the news and knowing general things about the world and history,” said Nubel. “We both know a lot about a lot of things. But our scopes of expertise are different, so we can complement each other by filling in different types of information depending on what the resolution is.”

Nubel and Davis have learned to operate on the same wavelength and can sometimes communicate without speaking at all. And they instinctively balance each other out—when one takes an aggressive approach, the other keeps calm.

The debate will use the British Parliamentary format, which involves four teams debating two sides of an issue in seven-minute rounds. Nubel and Davis will represent Loyola as one team. While they defend their side, they must not contradict the other team debating on the same side while providing a superior argument.

Loyola has typically debated in American style, so transitioning to a new format for the Oxford Competition will present an adjustment challenge. To prepare, the Loyola debate team will compete in a few British Parliamentary style tournaments in the United States before departing in November.

But Nubel and Davis have been debating for eight years—since high school—and they also coach Chicago high school debate teams. Their confidence in themselves and in each other is evident.

Even so, Loyola’s debate team is more focused on personal growth than glory.

“There’s nothing more exciting than seeing someone gain confidence in themselves,” Romanelli said. “I don’t care if they don’t get a trophy—I’m serious about that…I tell my students that the best debate they will have may be one they will lose.”

The team does intend to raise the image and presence of Loyola University. Attending the Oxford Inter-Varsity Debating Competition will put Loyola on the radar of other top universities so the debate team can get involved in other competitions and eventually host a tournament on their own turf.

Throughout their debate careers, Nubel and Davis have gained much more than the opportunity to compete in London.

“Debate has helped me develop a productive thought process,” Nubel said. “When people say things to me I don’t just take them on face; I’ll think critically.”

And of course, Davis is on the same page as Nubel.

“I don’t know what kind of person I’d be if I hadn’t done debate, she said. “It’s really important to me to be a part of this community...even after graduation.”