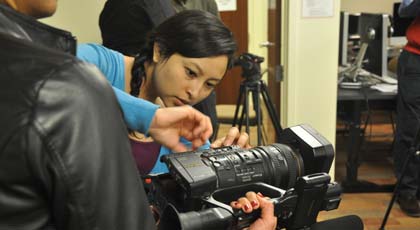 November, 2012--Do you have a story? More importantly, can you tell it? And, can you tell it digitally?  The School of Communication’s new Masters program in Digital Media and Storytelling opened this fall, giving graduate students a chance to learn how to produce and share their narratives.

The program’s first cohort has around 17 students that come from a wide range of professional and educational backgrounds. Some are fresh out of their undergraduate education while some students have been a part of the job force for years. Regardless, program director, Meghan Dougherty, PhD said that the new degree was designed to cater to all backgrounds and storytellers.

“Most of these students are motivated by a project or a way that they want to work in mind; they want to build, they want to make things, they want to create things,” Dougherty said.” They have this incredible creative sensibility and they see either a specific project vision or at least an area in which they would like to produce and they land here in this program.”

“Production in these areas looks a little different; the communities that practice in these three areas function a little bit differently but across those communities there are definitely shared skills and above and beyond all of that they all exist within this participatory digital culture,” Dougherty said. “So the students get those foundational things and sort of build a project based within those tracks.”

The degree requires students to take two capstone courses where they use the conceptual and technical information they have gained to produce a project of professional quality.

“They’ll be able to take these concepts and characteristics of this ecology that they’re in and move them into the next semester where they’re producing and doing research,” Dougherty said. “The last class they take is a distribution class so they then move what they produce out into the world. It seems like it’s a really good flow; it seems to be working.”

Elisabeth Montemurro graduated from the University of Wisconsin, Madison with a degree in Political Science. After a few years in the work force she decided to get her Masters degree and chose Loyola from a group of potential schools for large scope of its program.

“I always kind of had in the back of my mind that I wanted to do more with communications specifically so when I was looking for graduate programs I stumbled upon Loyola’s and I thought it would be a great fit,” Montemurro said. “With the digital media aspect, I felt it was more cutting edge, which is where I feel press work is heading.”

Dougherty said that the program is meant to help people find a way to incorporate their passions into an informative and useful product.

Sarah Hillman, a student in the first cohort, graduated from Virginia Commonwealth University with a degree in International Social Justice but came to Chicago to get her Masters at Loyola.

“I was surprised how much freedom we have to express our thoughts with our writing and different things,” Hillman said. 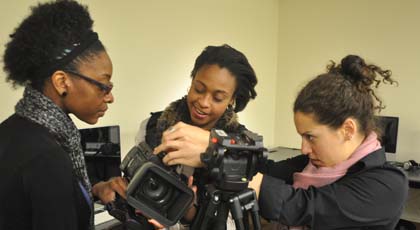 Creativity is essential in digital storytelling and both Montemurro and Hillman agreed that the small size of the program helped to encourage a productive environment.

“I really like the fact that it’s a small program so I feel like as time goes on, we’ll be a pretty tight knit group working together on projects, down the road too,” Hillman said. “I really like how it seems that the professors all seem to be working together, we didn’t have that in undergrad at all. They really have our best interests in mind.”

Dougherty said she also feels the program has been successful in creating a productive environment.

“Thinking back to my own graduate school experience, being with the cohort that I was in, and forming the connections and friendships that I did with my fellow peers that is something that I still draw on and something that that was really influential for me,” Dougherty said. “I see that happening here.”

Another fairly new addition to the School of Communication is the Center for Digital Ethics, which was founded by Loyola in an effort to explore the question of ethics in the digital world.

“At the School of Communication we have the Center for Digital Ethics and Policy and one of the classes they take is Law and Ethics,” Dougherty said. “So we have this commitment to sort of seeding all of that in the idea that students who graduate from this are ethical producers and consumers of media in their three different tracks.”

‌Dougherty said that for undergraduates looking for their next step, the Digital Media and Storytelling degree is a good option for those seeking a way to materialize what they’ve learned.

“We’re digging much deeper into some concepts and we’re talking about big theories and big ideas and how to actually take those ideas and turn them into something that’s produced,” Dougherty said.