Whether against the backdrop of Lake Michigan or the Andes Mountains, the fundamentals of storytelling remain the same. And luckily for Loyola communication students, they now have a chance to explore social justice issues in both places through a short-term study abroad trip to Santiago, Chile.

Over the course of two weeks this May, students will create their own documentary under the guidance of longtime documentarian and Loyola University instructor John Goheen. They will be partnered with Chilean students from Universidad Alberto Hurtado, a local Jesuit university, who will help Loyola students navigate the culture and language.

Since the trip focuses on digital storytelling, Goheen said he will be lenient on how students choose to tell their stories. Radio, video and still-photo documentaries are all welcome. For those with no documentary experience, Goheen added that any and all students are encouraged to apply. 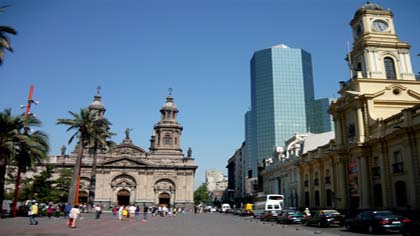 “It’s not designed to be a program where you learn how to shoot, produce and edit a documentary in two weeks,” said Goheen. “But you can learn the fundamentals of storytelling working with somebody who knows how to do it.”

The course is rigorous. Students will attend cultural activities and day trips on top of their creative responsibilities. As Goheen explained, it’s not like a normal college course. Students may be free from the weight of other class work, but they won’t have an entire semester to develop an idea.

“It might be time consuming, but it seems like it would be fun,” said junior journalism major Tim Nagle.

Nagle transferred to Loyola and doesn’t have time to do a semester abroad. He added that he wants to slip in a snowboard trip to the Andes Mountains, since it may be his only chance to see them.

That hope hints at what Goheen cited as the idea behind the digital storytelling trip in the first place: a chance for students to experience a new culture without veering from their academic track.

“It affords that opportunity where somebody can still get that international experience, get credit for it and get a summer job because it’s at the end of school,” said Goheen.

Marissa Cameron, a sophomore visual communication and international film and media studies double major, said she decided to apply to the program for that reason. Cameron grew up in Chicago and has never travelled outside of the country.

“I think we can alienate ourselves in our culture,” said Cameron. “It’ll be nice to get some exposure to other things and other people’s concerns and really humanize it.”

For fashion-minded first year digital storytelling graduate student Nia Allen, it was the short-term aspect of the study abroad course that appealed to her.

“I’ll be a little nervous, but two weeks is good,” said Allen. “It’s just enough time to get your feet wet and then come home.”

Thanks in part to Loyola’s pre-existing Chile study abroad program, the university and Universidad Alberto Hurtado have a close relationship. Having that touch point makes the whole process easier, said Goheen.

Students will stay in a hotel during the trip, but a lot of their cultural education will come from their bi-lingual partners at Universidad Alberto Hurtado.

“They know the shortcuts, the places for lunch, the night clubs,” said Goheen. “They have context. You can’t always get that by yourself.”

Even though the program has been catered to fit busy students’ needs, the signup process has been slower than hoped. Tuition costs nearly $4,000, and that’s without the added airfare.

"Who wouldn’t want to go?” said Goheen. “Everybody wants to go, it’s just that it’s not practical or feasible for everyone to do it simply because the cost.”

Like any study abroad program, cost is an issue for many students. There are several scholarships available, however. Goheen pointed out that, like any creative, cultural experience, the benefits outweigh the costs.

“They’re capturing a moment of their life they’ll always have,” said Goheen. “They’ll have a tangible part of being a storyteller - sharing your perspective of the world.”

When she first heard about the program, Cameron said she was worried that she wouldn’t be able to afford it.

“When my parents told me that we were going to be able to get the funds together, my dad put some chili powder in a bowl and I had to figure [what he meant] out,” said Cameron. “Everybody’s looking forward to this. My mom is telling everybody about this.”