Dr. Patricia Kay Felkins will retire at the close of the semester 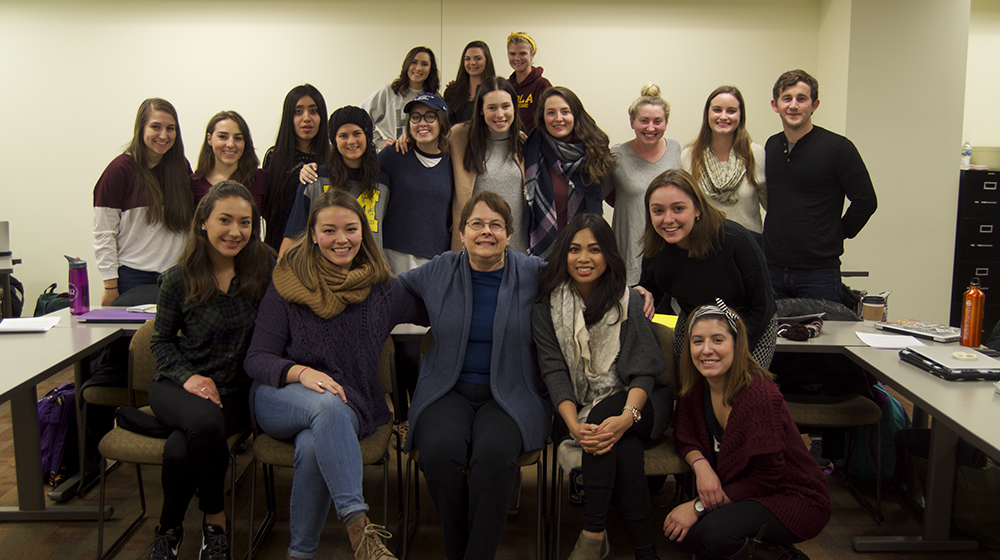 For almost four decades Dr. Patricia Kay Felkins has been helping students and passionately teaching them about communication.  Felkins is retiring now after a long and distinguished career.

Dr. Felkins, who first came to Loyola in 1978, is an associate professor in Public Relations and Organizational Communication and the founding Director of the SoC’s Advertising and Public Relations program.

“I have always been drawn to the social justice mission of Loyola and its location in downtown Chicago,” she said. “I love the energy, opportunity and diversity of this city, and I am so thankful that I have had to opportunity to grow with this institution in Chicago.”

She recently published The Nonprofit Factor: Gathering at the Table for the Common Good, the fifth book she’s helped co-author.

“I believe in building community relationships and bringing people together to make the world better,” she said. “I will continue to do this.”

But looking back on her nearly 40 years at Loyola, Felkins said she is most proud of her role as the founding director of the Advertising and Public Relations program.

“I have been honored to help build some of the foundational courses and programs for the … School of Communication, especially in the area of organizational communication, public relations and public service communication,” she said. “And one of the challenges was, ‘How do we bring together advertising and PR?’ They're in some ways different, and yet at the same time, have some strategic similarities. So we took an integrated approach, which considers the contributions of both."

She’s seen the program grow fast and steadily throughout the years. And it’s not only remained a popular option among students, but she said it’s also served to bring together many creative folks at the SoC.

“I remember when I developed the capstone course for AD/PR and taught the first capstone course,” she said. “There were 11 students, and they called themselves pioneers.

Yet another highlight was acting as chair for the committee responsible for crafting the SoC’s mission statement in 2012.

Located on the SoC’s website, it reads, “The School of Communication is a community of learners that fosters critical thinking and innovation, integrates big ideas in communication theory and practice, tells stories across multiple platforms and adapts to changing technology and social needs. We develop ethical professionals with the knowledge and dedication to make a lasting contribution through communication and service in the world.”

And in 2008, as the SoC was moving into its new location at 51 E. Pearson on the Water Tower Campus, she remembers gathering with faculty members to discuss the future of the school.

“A group of faculty stood together in a circle in the lobby late one afternoon and talked about our hopes for the new school,” Felkins said. “I asked if people would hold hands and some did. We spoke around the circle of colleagues a kind of blessing of the new building and our mission.”

And it’s that sort of personal connection that her former students seem to most value. Everett Gutierrez, the first Advertising and Public Relations program graduate, remembers having five or six classes with Felkins by the time he graduated in 2006.

“She really pushed me out of my comfort zone,” he said. “Every time I had a class with her, she’d push me even more, because she knew what I was capable of. She knew I had what it took, so she’d always raise the bar so I’d strive to do better. It was intense, but a learning experience I’ll never forget.”

Gutierrez said the experience made Felkins one of his favorite professors. But also, he respected her sense of integrity, and he said it’s the number one thing he carries with him through his career.

“And after taking so many classes with her, she became a mentor and even a second mother figure to me,” he said. “She took me under her wing, when I was a struggling, first generation college student trying to find my way. There was almost a time when I quit Loyola, but she was the one who kept me going.”

Felkins’ personal interest in students also means keeping in touch for decades. Cindy Johnson, a 1986 Loyola graduate, was one of Felkins’ first students, and now considers her a close friend.

“We get together regularly and socialize,” Johnson said. “I like to joke she taught me PR, but I taught her how to drink martinis. We don’t talk about work so much. It’s more of a friendship these days.”

As she moves on from her teaching position, Felkins plans to spend more time with Africa Circle of Hope and other educational projects in Kenya.

“In some ways I will miss the students, faculty and colleagues,” she said. “I’ll miss all the opportunities we have for learning together. But I really believe that learning is a lifelong process.”

Rather than call the next phase of her life a “retirement,” she refers to it as a “transition.”

“There’s really much to learn as I transition from one period of my life to another,” she said. “Because I’m going to be working with Africa Circle of Hope, and I’ll be spending a lot more time in Kenya.”

Africa Circle of Hope, co-founded by Felkins in 2007, was a way for her to put social justice values into action. The organization works with women and children affected by AIDS and poverty in Kenya, with programming focused on education, technology and entrepreneurship.”

“I’ll be continuing in as many ways as possible to stay connected to the School of Communication,” she said. “In fact, next summer and hopefully continuing for many summers to come, we’re going to have a two-week film workshop for kids from the slums in Nairobi. So they'll be learning the basics of how to make films."