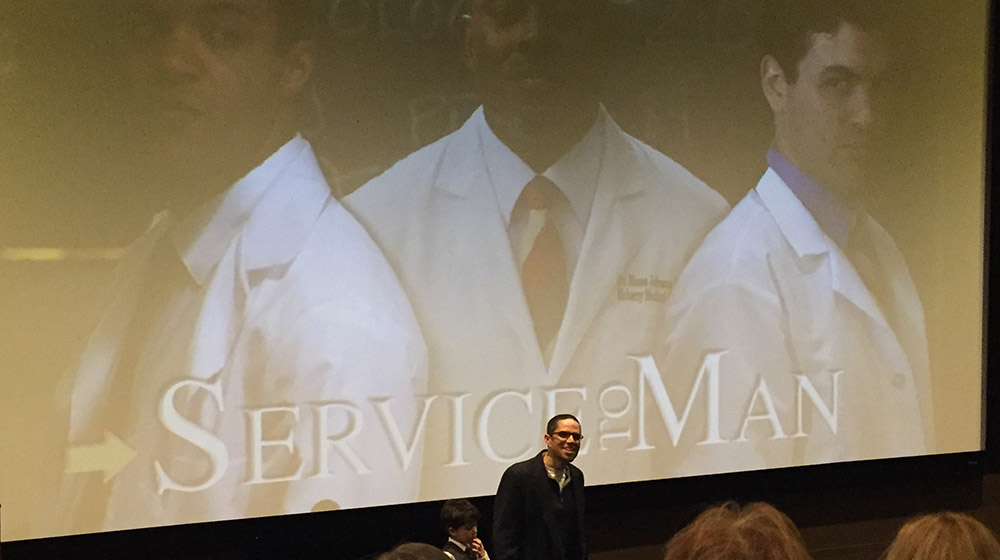 Aaron Greer has previously screened “Service to Man” for private audiences at Loyola and public audiences elsewhere, but Thursday marked the first public screening in Chicago.

“Service to Man,” a film co-directed by Loyola professor Aaron Greer, has screened at about a dozen film festivals – including one in Amsterdam – but the audience at Loyola Thursday evening was a special one for the filmmaker.

Among about 30 faculty members, staff members, students and alumni got a chance to watch the film during a showing in Damen Cinema. 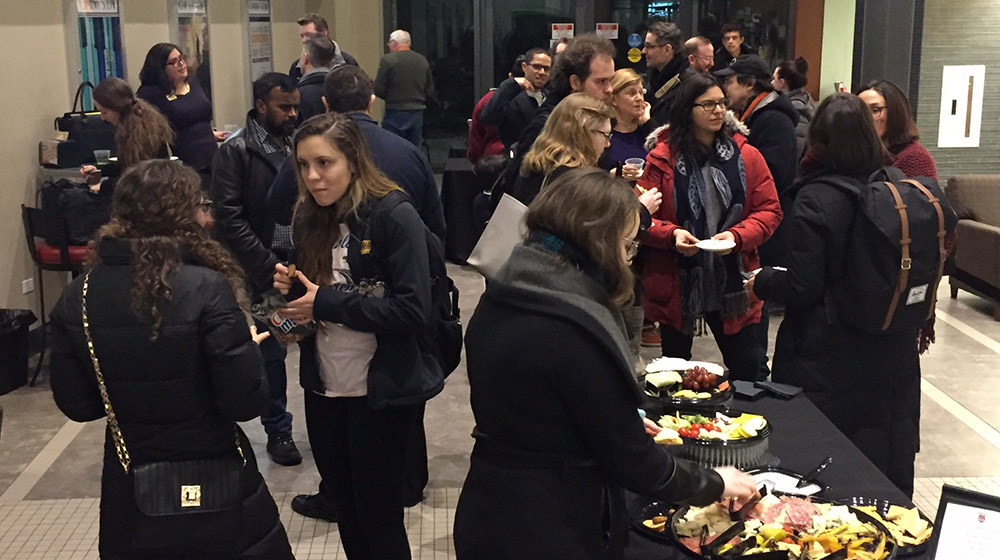 Set in the 1960s, “Service to Man” details one man’s experience as one of only two white students at Meharry Medical College, an all-black school in Nashville. Greer said it’s loosely based on the true story of Norman Panich, the father of co-director Seth Panich.

Although it’s a high-drama period piece, the film contains a healthy dose of comedy that often surprises audiences, according to Greer.

“Being a fish out of water, there is stuff that’s awkward and funny about it,” he said. “White folks in this country aren’t used to being fishes out of water. And there’s stuff about it that can be funny. There’s stuff that’s uncomfortable, too, but that’s part of what I wanted to reflect.”

Just as the Jewish character Eli Rosenberg finds his expectations about medical practice and race relations challenged, audience members had their assumptions about the film itself turned upside down.

Class of 2014 alum Justin Howe said he entered the theater expecting to see a traditional documentary. Instead, he said, “Service to Man” reminded him of “Hidden Figures,” a movie about African-American women working at NASA during the Space Race.

“Once I realized [“Service to Man”] was kind of the same vein, I was kind of looking at who are the protagonists, who are the antagonists. It was interesting because I feel like a lot of the characters played a lot of those roles,” said Howe, a former student of Greer’s.

Alum Jimmy Boratyn, who also had Greer as a professor, agreed that the film took a different approach than he had predicted.

“I was pleasantly surprised,” Boratyn said. “It wasn’t quite the story I was expecting, but I did find it really interesting in how it focused on an aspect of the 1960s that you wouldn’t ever really think of,” said the class of 2011 alum.

Greer said that uncommon perspective is just what first intrigued him about the story.

Among those who got to see the film for the first time were Greer’s children – Naomi, 4, and Julian, 7. 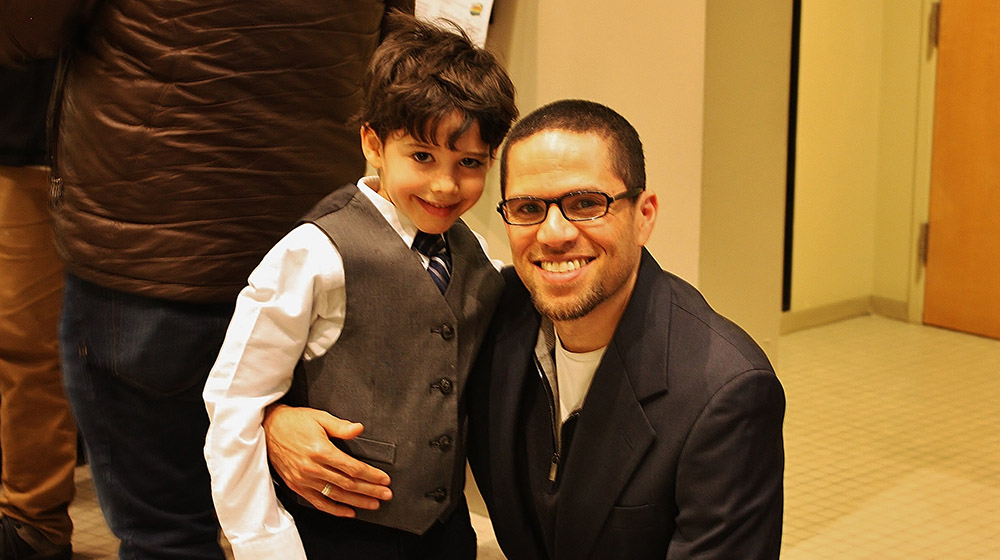 “Naomi was playing hide and go seek with [events coordinator] Genevieve [Buthod] outside … but Julian – we’ll have to have a conversation,” Greer said after the showing, when asked if he was prepared to have a talk with his kids about the film’s language and serious themes.

With “Service to Man” finally completed, Greer said he’s focusing on the painstaking tasks of promoting the film and securing distribution.

“I’m anxious for this part to be done and to move back to creative stuff, but it would be a little bit like kicking Julian out of the house right now; the child’s not fully on his feet yet,” Greer said. “It’s not self-sufficient, and so it would be negligent of me.”

Greer said he aims to make “Service to Man” available in formats such as Netflix and iTunes by the end of this year, after it finishes making its rounds at festival screenings.

For now, he said he’s hoping one notable actor in the film will help it get some “Oprah shine.” Lamman Rucker, who plays Dr. Johnson in “Service to Man,” also stars in “Greenleaf,” a television series produced by Oprah Winfrey.

Oprah or not, “Service to Man” seemed to have staying power for Thursday night’s audience members, who energetically voiced their enjoyment and frustrations as the plot unfolded.

“As a filmmaker, those are your favorite kind of reactions,” Greer said. “It means that people are really engaged in the story and lost in the emotion and being moved.”

The laugh-out-loud moments helped the movie explore difficult, uncomfortable subject matter without leaving viewers feeling depressed, according to alum Boratyn. Even with that balance, he said, the film felt realistic.

“[Greer] really delved deeper into the nuances of what went on, what could have went on, what it was like for essentially a white man to experience what it was like to be an African-American during the 1960s,” Boratyn said. “It came across as a very true film with very real characters that I think most people could relate to.”