Freebies and ‘family’ plentiful at the first SOC Freshfest 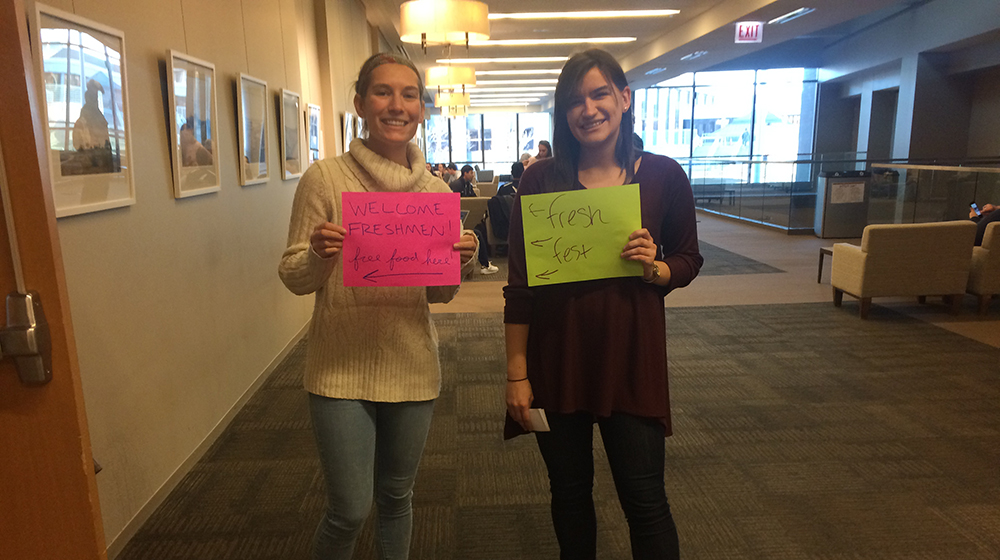 Students from Beta Rho direct freshmen into the Damen MPR for the first-ever Freshfest.

It’s not easy being green, as freshmen know well.

That’s why the School of Communication held Freshfest, an afternoon hangout for first-year students, where they got free food, snagged swag and chatted with professors and upperclassmen in the Damen Student Center MPR.

“I think it helps different fields of communication all come together and meet each other and get introduced to different people that are higher up,” said freshman Kasey Schleper, a journalism major from Shakopee, Minnesota. 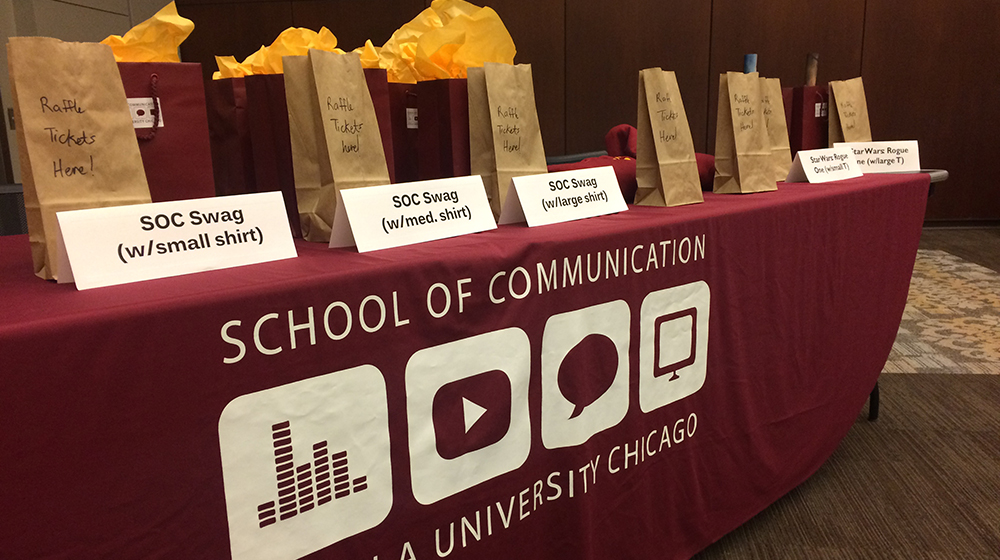 While eating the free Chipotle that was offered buffet-style along with Chick-fil-A and Insomnia Cookies, Schleper and her friends, who are also freshmen, agreed that Freshfest was helpful in a way other SOC events aren’t.

“It’s casual, but at the same time, it’s not overwhelming,” said Eileen O’Gorman, a journalism major from Kankakee, Illinois. “I think the career fair, even the org fair … it’s just very overwhelming, and I feel like I get this information overload. I’m almost happy there’s not every single club represented here.”

“[At the org fair and in classes] there’s no way to get immersed,” added Schleper, 18. “We know what our resources are and the clubs that we can join and stuff, we just don’t know how to get started.”

Academic Adviser Kat Fraser said Freshfest was created specifically for first-year students and intended to be a more laid-back event than the organization fair, which takes place at the beginning of the semester.

“The org fair can be a little intimidating for some people – even the SOC org fair – because it sometimes seems students feel like there’s pressure to join,” Fraser said. “This is kind of a low-risk way for people to engage with faculty and staff and their peers, ask questions and talk to students who’ve studied abroad or who are involved in certain student orgs without that pressure of having to sign up.”

At Freshfest, students could even interact with a green screen. Jim Collins, manager of Loyola’s TV studio and Rambler Productions, ran a high-tech station at Freshfest where students could choose a background to be displayed on the green screen, be filmed in front of it and later receive screenshots of the activity through email.

Collins said he talked to some first-years at the event about the opportunities available to them in the SOC.

“There’s a lot of things you can do right away, [such as] Rambler Sports Locker,” he said. “If you get involved [with Rambler Productions] as a sophomore, you can work for me for three years … The more you do, the better you get.” 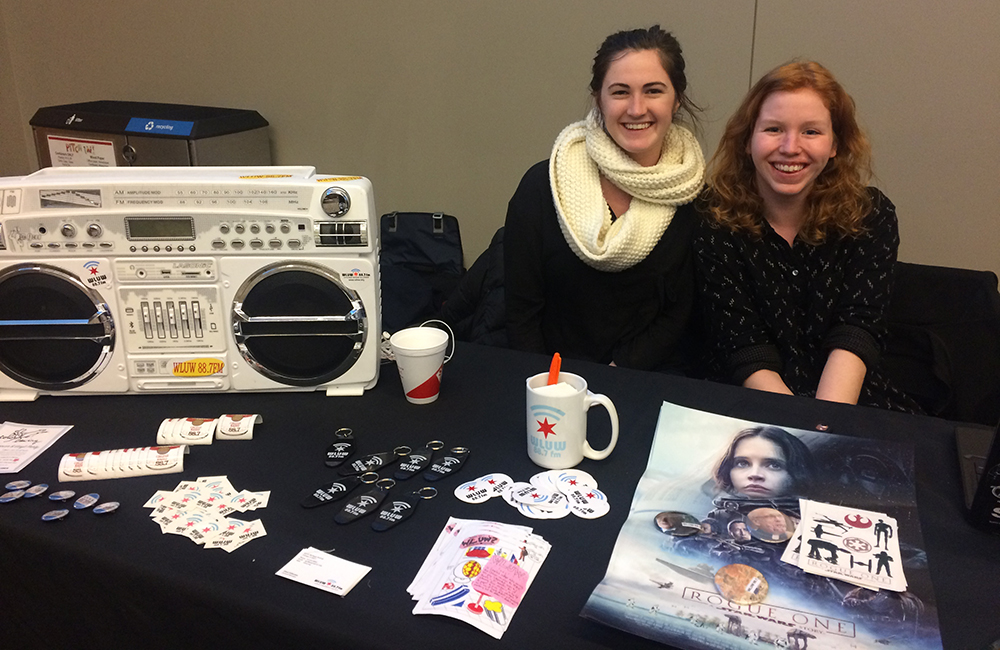 Also represented at Freshfest was WLUW, Loyola’s radio station, with a table where student-DJs Dana Killam and Lily Shallow were handing out Star Wars posters and stickers. The two said getting involved with WLUW helped them feel more connected to Loyola.

“I felt like I didn’t really have my place until I found the radio station,” said Killam, a 21-year-old senior ad/PR major from Toledo, Ohio. “We joke about our radio family … The group that’s here, we’re really good friends and we hang out outside of work and stuff. I feel like we’re pretty lucky, in that sense.”

Events Coordinator Genevieve Buthod said she saw that strong community in action when things didn’t go as planned for the three-hour Freshfest, which drew in about 70 students.

When the DJ fell through, Loyola’s therapy dog Tivo could no longer attend, and the cornhole boards arrived without bean bags, a group effort made the event happen anyway.

“Every single person here – not even just the faculty and staff, but the students and the volunteers – really came together and worked it out,” Buthod said. “Everybody was totally pitching in and helping each other, and it’s that community that the School of Comm has. And I think that is unique to us.”

O’Gorman, for one, said she enjoyed entering the raffle, receiving a button with a pig on it and listening to the music from WLUW, but she also had a few ideas on what might bring her back.

“It seems like there’s a lot of stuff, but it would be cool if it was more interactive,” she said. “I think it’d be more interesting if it was at the School of Comm building, and then you could go around and see the different rooms because I feel like it’s a maze down there. Other than that, I like it – I like anything the School of Comm puts on.”