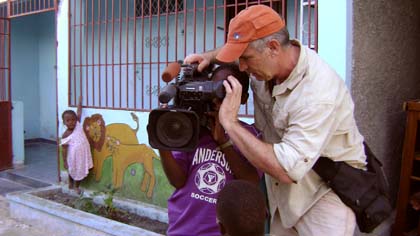 It’s not every day that a Loyola professor wins an Emmy. But video and documentary professor John Goheen has now gone beyond that - he’s being inducted into the National Academy of Television Arts & Sciences’ Silver Circle.

To make it into the Silver Circle, a “society of honor,” a nominee must have worked in the broadcast media industry for at least 25 years and made a significant contribution to the field. The nominees are reviewed by the Silver Circle Committee; at most, 10 people are admitted each year.

This is Goheen’s year. He will be inducted into Heartland Chapter’s Silver Circle at their Denver Gala on July 12.

The Seattle native has been a professional journalist and videographer for 34 years, but his first foyer into journalism rolled around when he was 15 and a handful of his photos were published in a weekly newspaper. It took him another year and a class at his high school to figure out that video was where he belonged.

After graduating from Eastern Washington University, Goheen had a military commitment, serving as a second-lieutenant in the U.S. Army. One of his first jobs was as Detachment Commander for the American Forces Radio and Television Network stationed in Frankfurt, Germany. Here he served in a management position over others doing what he wanted to be doing - creating stories.

Goheen then moved on to work in Alaska, New Mexico and Utah after the war, all the while trying to get back to his hometown, Seattle. When he finally did get there, “it just never felt like home,” Goheen said. So he jumped ship and headed to out to Denver, where he did the bulk of his professional work. After accepting the offer to teach at Loyola, he splits time between Chicago and Denver.

Now Denver’s broadcast community is recognizing him for his work yet again. “That’s certainly something you have to realize is unique and special, and you have to value that because not everybody gets that recognition,” Goheen said.

Professor Lee Hood, a colleague of Goheen’s, also worked in the Denver market, much of her time there overlapping with his.

“He’s always had a reputation for being a topnotch professional and doing really extraordinary work,” said Hood.

Goheen has a signature style of storytelling. His work is not narrated, instead using the voices of those involved to tell the story. “It’s more of an experience,” he said. “I like to take you there. I like to let you just become part of the story.”

“He’s very modest about his own work,” Hood said.

International film studies major Hayley Stuber said the same of Goheen. She’s had him for two different courses and only saw his video work when Hood showed it in a class. The junior attributes most of what she knows about filmmaking to Goheen.

“If I ever make it somewhere big, he deserves a lot the credit,” Stuber said.

Stuber added that while Goheen is critical of students’ work, it prepares them for what they’ll face after college.

“I’ve certainly been open to sharing my knowledge and experience with others,” Goheen said. “I really enjoy being a teacher because you can teach these concepts, principles and ideals and hope that your students can take what works for them and apply it.”

Goheen sees teaching as a big part of his contribution to broadcast, a requirement to be a member of the Silver Circle.

Hood agrees. “I think that is what I’ve really come to appreciate about him - in addition to his professional work is how he is able to inspire his students to do really exemplarily work as well,” she said.