Hoovers Come as a Package Deal 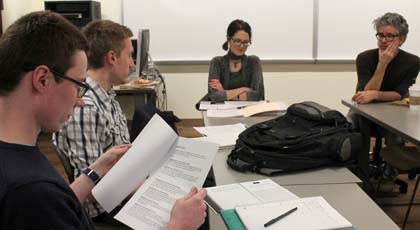 There are four things successful screenwriters need: a lack of sleep, an espresso machine, ideas and a passion for what they’re doing. Film and digital media adjuncts Beth and Gary “Gar” Hoover have them all.

“We really love what we do, so it’s kind of hard to turn it off and really want to sleep,” Beth said. “We have a lot of opportunities that we’re fortunate to have come our way and we jump on most of them.”  The award-winning duo has received top honors for their work at several film festivals nationwide and founded their own branding and digital content agency.

In addition, the Hoovers have gained recognition from writing competitions, such as Francis Ford Coppola’s American Zoetrope and the Nicholl Fellowships in Screenwriting, sponsored by the Academy of Motion Picture Arts and Sciences.

Gar is also an accomplished photographer, whose street art series of the Berlin Wall, called “The Art of the Wall,” is currently between exhibits in Chicago.

However, the Hoovers do not talk about their awards. In fact, they said their biggest accomplishment thus far has been “just getting stuff done.” “I would say in some way that’s the thing that we try to get across to our students,” Gar said. “It’s not necessarily about the awards. Writing a feature-length script is such an achievement in itself.”

The Hoovers currently teach a special topics class focused on advanced screenwriting at Loyola and a Story for TV and Film class at Second City, a premier comedy theatre and school of improvisation in Chicago.

“They’ve never mentioned the awards,” said Nick Harris, a senior at Loyola who is taking the Hoovers’ advanced screenwriting (COMM 371) class. “But they have mentioned and talked about contests that they’ve been entered into, so they have a lot of practical advice as to how to get started or where to send your script and different ways to get into the industry.”

Beth and Gar have been professors at Loyola since 2011, when they started teaching COMM 326, a course focused on the fundamentals of screenwriting.

Harris took the Hoovers’ COMM 326 class in fall 2011 and said he wanted to take the advanced screenwriting class this semester to finish his script. “It’s cool because, especially with a creative writing class, they’re in a workshop atmosphere,” Harris said. “Having two professors kind of invites you to join the conversation, instead of having one professor talking at you and giving you a lecture.”

Junior Amanda Kopec said she also likes the fact that both Beth and Gar teach the same class. “It’s a different experience to have two professors in the same classroom; they play off each other,” she said. “Sometimes Gar will have an idea and Beth won’t like it, and vice versa. It shows you that the audience doesn’t all want the same thing.”

However, the students are not the only ones who learn in the Hoovers’ class.

“The quote, ‘[When] one teaches, two learn’ – we really found that to be true in teaching,” Gar said. “I think we’ve found out more about our art in teaching it than we’ve ever known before. [The students] give a lot to us.”

Not long after being hired at Loyola, the Hoovers were hired to teach at Second City in February 2012.

“They come as a package deal, which is really lovely because there are no other teachers that teach in that way,” said Andy Eninger, the head of the writing program at Second City. “When they came in, there was a value to the two of them and a real uniqueness, too – a uniqueness like what Second City really creates. [They] bring a certain quirky wonderment to the Training Center.”

The Hoovers described themselves as being a “fork in the road” for the 12 students in their Story for TV and Film class at Second City.

Before the students get to the Hoovers’ class, they go through six eight-week-long terms of sketch writing.

“We’re the gateway from sketch writing to writing long form for the screen,” Beth said. “When they get to us, then they would choose their professional writing track of either screenwriting or TV.”

Gar added, “Our class is the first class that students get to on the professional level.”

Beth and Gar focus on more than just their students’ writing capabilities, though. They are all about ideas.

“The thing about our Second City class and also our classes here [at Loyola] that has struck us is that people come in with really great ideas – surprisingly good ideas,” Gar said. “Then what we try to help them do is develop that idea.”

Kopec said the Hoovers push their students to develop their ideas into something unexpected. “They always say, ‘Small story, big idea.’ Even if it’s a small story or only takes place in two locations, what really matters is keeping the audience hooked,” Kopec said. “The ideas they help us come up with raise the stakes – they always say that.”

Gar referred to these big ideas as a “holy grail” project.

He said, “The important part is to find that holy grail project, which is often a one-set play, but it has to have the juice – the story juice – and to be compelling enough to hold 90 minutes in, let’s say, a house.”

But where do the Hoovers find ideas for their own projects?

“Ideas are everywhere; we just have to keep our eyes open and try to observe everything that’s around us,” Beth said.

The importance that the Hoovers place on ideas traces back several years to when Beth and Gar first met each other working at the Virginian-Pilot, Virginia’s largest daily newspaper.

At the time, Beth was a business news reporter and Gar was a news editor and a features writer – positions that require coming up with interesting and relevant ideas to attract readers.

After transitioning into professional screenwriting, the Hoovers’ concept of ideas followed them.

“Having been from a news background, we’re keen followers of what’s happening around us with the societal background that could bring some sort of a backdrop to a script,” Beth said.

In addition to incorporating ideas into their scripts, the Hoovers have founded an agency that is all about ideas, called “ideafarm.” Ideafarm is a brand strategy and digital content agency, which “helps entrepreneurial companies both large and small tell their stories to the marketplace,” according to its website. 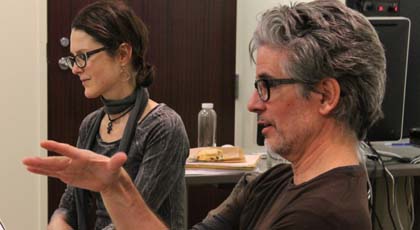 “It was a perfect combination of our backgrounds,” Beth said. “We were originally doing PR for clients using our media background, but it transitioned into an ad agency and finally it incorporated brand entertainment. Ideafarm was really merging our two professional lives.”

Beth and Gar are currently developing a comedy series for one of their clients, which they said will probably be finished within the first quarter of the year.

In addition to managing ideafarm and teaching at both Second City and Loyola, the Hoovers are working on a feature in development and starting a collective of independent film people, called “GroupThink Films.”

“This city has not been fully tapped; it’s a great production hub and it also has very great talent,” Gar said. “With some other people, we’re starting a collective of independent film people to do exactly that: to tap into the really great resources in this city that have not been fully tapped.”

The Hoovers said GroupThink Films will most likely launch within the first half of this year.

The collective reflects much of what the Hoovers teach their students at Loyola: seek and use the talent and resources that are available in order to put ideas into action.

“We’re always trying to sell anybody who we talk to about creative projects to do their own work,” Gar said. “We try to push people to think of actually writing things that they can either shoot themselves or shoot with other people, because that’s where we think the business is going. Instead of being at the mercy of larger production studios, we’re great adherents to being a creative force of your own.”

More information about the Hoovers’ work can be found at http://www.ideafarm.me/.