Internationally known management consultant and author Jill Geisler will join the School of Communication faculty at Loyola University Chicago as the inaugural Bill Plante Chair of Leadership and Media Integrity.

“We are delighted to have someone with Jill’s background, experience, and reputation join us,” said SoC Dean Don Heider, “She is one of a kind with her background in journalism and experience teaching management and ethics.  She will bring much to the school.” 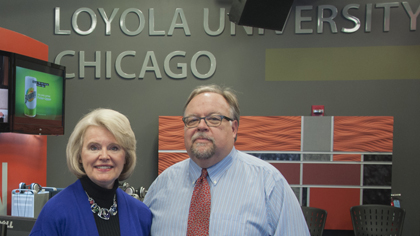 Geisler spent 16 years on the faculty at the Poynter Institute, a journalism think-tank and training organization in St. Petersburg, FL. and 25 years at WITI –TV in Milwaukee, WI. where she began as a reporter and anchor and became the vice-president for news.  Under her leadership the newsroom staff doubled in size and won numerous awards.

She is the author of Work Happy: What Great Bosses Know, a book for managers in all fields, which grew out of a column and podcast she did over a number years. The book has been released in English, Portuguese and Korean editions. Her podcasts have been downloaded over 13 million times.

Geisler regularly provides leadership training and coaching to staff and managers of media organizations including NPR, NBC stations, The Associated Press, The Washington Post, The Boston Globe, McClatchy publications, the Atlanta Journal Constitution, the Minneapolis Star Tribune, The John S. Knight Fellowships at Stanford, and DR- the Danish broadcasting corporation.  She writes a column for the Columbia Journalism Review.

Geisler takes a special interest in helping those who’ve been traditionally underrepresented in media leadership. She serves on the advisory board of the Journalism and Women Symposium and helps guide the ASNE Minority Leadership Institute’s annual programs.

According to Geisler, “Three things made this opportunity irresistible: The School of Communication’s focus on media integrity in the digital age, the chance to integrate leadership skills and values into an already strong curriculum, and Loyola’s commitment to social justice.  Even as I continue to coach managers in media organizations, I’ll be helping grow tomorrow’s leaders in Loyola’s classrooms.”

Geisler holds a M.A. in Leadership and Liberal Studies from Duquesne University and a B.A. in Journalism from the University of Wisconsin, Madison.

Geisler has been inducted into several journalism halls of fame, including the prestigious Silver Circle of the National Academy of Television Arts and Sciences.  The University of Wisconsin awarded her its “Distinguished Service to Journalism” honor.

The chair is named for Bill Plante, a veteran White House Correspondent and anchor for CBS News and a Loyola Alumnus, who has been a leader in tough and fair-minded journalism throughout his career.