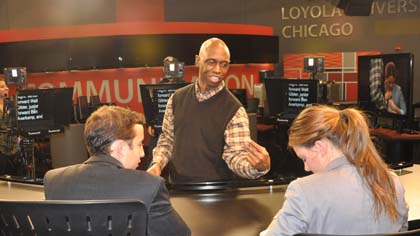 August, 2013--Loyola’s high-tech Convergence Studio can be a confusing place for new students, but studio manager Keith Kimmons was always around to help.

Kimmons died on August 10 after a lengthy battle with cancer. He had worked in the School of Communication since 2010.

The School of Communication held a memorial for Kimmons on August 29 in the Convergence Studio where he worked. The event was attended by a full house of faculty, staff and students; many took time to speak about how Keith had touched their lives.

Among the speakers at the memorial was Varnell Kimmons, Keith’s mother. She spoke of him as a gentle and caring man who loved his family, working with others and his commitment to Loyola.

“He truly loved Loyola. He loved his work, he loved the kids,” she said.

Kimmons had an impact on current and former Loyola students. Beth Konrad, a journalism professor, brought the condolences of four alumni who had secured jobs after graduation, saying they never would have found jobs without his teaching.

Kimmons also worked with student productions at Loyola like Rambler Productions and Rambler Sports Locker, a student-run sports news show that airs an episode every week.

Megan Carabelli, a senior who works on Rambler Sports Locker, described Kimmons as a master of technology who was essential to running the show. Carabelli remembers Kimmons as a patient teacher who never became frustrated with any student.

“He was one of the most unique teachers I have ever had in that he knew if he said it once we were listening.”

Nick Amantangelo was a freshman secondary education and history major when he stepped into the studio for the first time. He said he didn’t know much about television or journalism, but was passionate about sports and wanted to learn.

“I didn’t know anything, and Keith was so influential at the time,” said Amantangelo. “I changed my major to journalism because of my experiences with Sports Locker.”

Amantangelo said he learned everything from how to turn on a camera to how to edit the final show from Kimmons.

He recalls a time when he wanted to learn how to work the switcher, the device that controls which camera is used during a broadcast. He said it took him months, but Kimmons was always around to help.

“Because of his teaching I’m confident I can succeed in journalism,” he said. “I’m honored to have known him.”