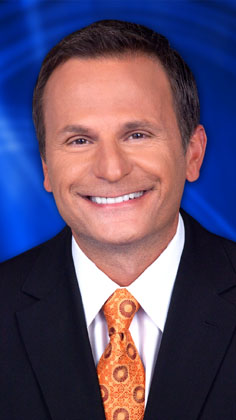 The 1990s in Chicago were a time to get the family together, turn on the TV, and watch Michael Jordan lead the Bulls from one National Basketball Association championship to the next.

Audiences who watched the post-game interviews can recall Jordan talking about his team and how well they worked together and basically ran the NBA.

What they might not know is it was a Loyola alumnus, front-and-center, interviewing Jordan after every game.

Lou Canellis graduated from Loyola University Chicago in January 1987, and followed the Bulls for eight years in the ‘90s.  Canellis said that it made his career what it is today.

“Everything else just kind of fell into place after that, because everyone watched the Bulls games back then,” Canellis said. “It gave me a name in the market.”

Now, Canellis is the 9 p.m. sports anchor for Fox Chicago News, and it is his magnum opus.

“The job that I have now at Fox was always my dream,” Canellis said. “That’s what I wanted to do. I wanted to be the local sportscaster in my hometown, Chicago, on a network station, and I made it. Thank God.”

Canellis was born and raised in Oak Lawn, Ill. He played baseball in high school, and had wanted to go away from Chicago for college so he could play baseball alongside taking communication classes. His father, however, had other ideas.

“I was the oldest of three boys in a Greek home, and my dad had a problem with me going away to college, so he basically said ‘I’m paying your tuition, and you’re staying home,’” Canellis said.

Loyola seemed like a good fit for Canellis. His uncle, Nick Kladis, was a basketball player at Loyola from 1949 to 1952. Kladis had been a volunteer assistant coach for the 1963 team that won the NCAA championship. Kladis’ jersey number, 3, is now a retired number for Loyola men’s basketball.

Additionally, while the School of Communication did not exist yet, Canellis had heard that Loyola’s radio and television communication program in the College of Arts and Sciences was taking off.

With Canellis’ strong family tie to Loyola, the school offering his desired major, and the fact that Loyola was close enough to Oak Lawn to keep his father happy, Canellis started his college career at Loyola in 1982. He jumped right into radio journalism.

“We had this orientation and they took us through WLUW Radio,” Canellis said. “I remember walking through the station at the orientation, and the radio station general manager was giving us a tour. He said maybe this was something we would want to pursue our junior or senior year. I looked at him and I said, ‘I need to pursue this now, or I’ll go crazy, because I need to do something that I’m going to enjoy.’”

For the next nine semesters, Canellis reported sports during the newscasts at WLUW Radio. He eventually became sports director at the station and even reported Loyola basketball games on WLUW.

Canellis’ passion for sports carried over to his internship at WLUP—97.9 FM, or The Loop, as many Chicagoans know it. His entire college career, Canellis interned for Bruce Wolf at The Loop, covering sporting events for the station.

When Canellis graduated from Loyola, Wolf recommended Canellis for a job as a radio editor at Public Interest Affiliates. Since then, in addition to covering the Chicago Bulls, Canellis has worked for ESPN Radio and the ABC 7 newsmagazine 190 North.

Sports fans have seen Canellis on Fox for more than seven years—the first two of which Canellis spent hosting Sunday shows for the Chicago Bears. He has been a sports anchor on Fox for the past five years. Canellis owes his career to his hometown, Chicago, and never having to leave it.

“I tell every high school student who’s thinking about college that one of the big reasons why I didn’t have to start my career in a small market is because I went to Loyola in the city,” Canellis said. “It enabled me to get an internship in the city, and I was able to start my career at a young age in Chicago. I’m about as lucky as anyone out there.”