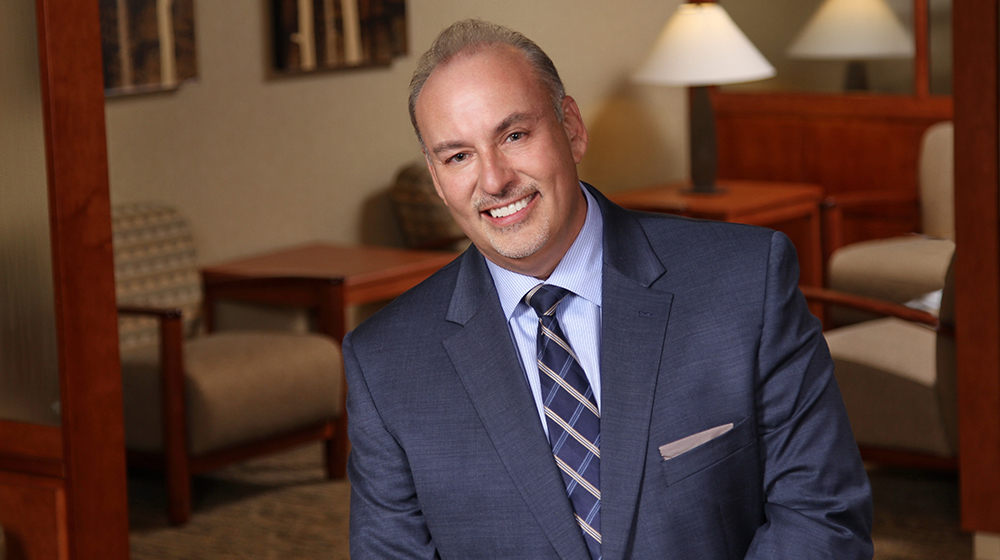 Doctors aren’t the only people in health care working to save lives.

His 14 years of journalism experience help him recognize important stories that could slide under the radars of other public relations professionals.

He once received several calls from ER doctors reporting adolescents overdosing on over-the-counter cough syrup. Thinking like a reporter, he researched the issue and discovered that it wasn’t just a handful of kids overdosing—it was dozens.

“I thought there was an opportunity to create some awareness about this issue,” said Wakely. “I worked with some of the ER doctors to uncover a whole subculture [of drug abuse].”

Wakely’s commitment to the issue earned the attention of the local press and later, the national press.

The life-saving story was featured on the cover of People magazine and AMITA Health doctors appeared on the Today show. Many major pharmacies began putting cold and cough drugs behind locked cases as a result of Wakely’s efforts to highlight the danger in making them overly-accessible.

“I felt there was a bigger story there and as a result there was a national mandate for teens who were abusing it,” said Wakely who graduated in 1987 with a degree in communication with a journalism minor.

In this instance, Wakely was merely following his intrinsic motivation to serve others. Early in life, he was interested in the priesthood, but ended up following his passion for news. While working as a radio broadcaster at a number of stations in Illinois and Texas, he covered many noble organizations and realized that he could make a much greater impact by working with nonprofits, so he jumped fence to public relations.

“I didn’t have an ‘aha’ moment,” Wakely said. “It came from many years of seeing the good that was being done by some of the people I was reporting on.”

Because Wakely brought an insider’s understanding of how to pitch stories to reporters, his career transition was smooth. Loyola also prepared him to work in many aspects of the media.

“The track that I took in my undergraduate program really immersed me in everything from interpersonal communication to media relations to broadcast news to journalism,” said the 1987 graduate.

As a student, Wakely pursued a communication major and a journalism minor.

“It was a very thorough and very broad track that was almost tailor made for me,” said Wakely. “The faculty did a great job working with someone like me who had some grandiose plans to be a top reporter…My time at Loyola was invaluable.”

During his undergraduate career Wakely fed his interest in broadcasting by working at the student radio station, WLUW. There, he received essential mentorship.

“I must thank and eternally will remember Wayne Magdziarz. He was very instrumental in inspiring a career in broadcasting,” Wakely said.

Magdziarz is now Senior Vice President for Capital Planning and Campus Management at Loyola but at the time, he was managing the radio station and teaching courses in radio and TV production.

Wakely emphasizes that credibility is the most important trait in a public relations professional. He maintains relationships so that when he calls a reporter, he or she knows it will be something newsworthy rather than a corporate fluff piece that isn’t relevant to the average reader.

Although he’s been working in public relations for almost 15 years now, there is one part of being a journalist that Wakely can’t seem to relinquish: the late hours. Even as an executive, he may still stay up late, waiting wolf-like for the next story.

“I’ve been unable to let go of that mentality of always being on call from some of my very first positions in radio working the overnight shift,” he said. “There’s still something satisfying for me to take a call at 2 a.m.”