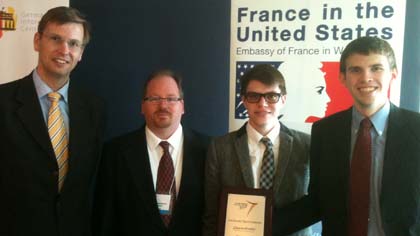 April, 2013--Loyola Chicago Junior Phillip Kraft and Freshman Joseph Carroll have talked their way into a free trip to Europe.  The duo did so this weekend by getting to the quarterfinals of the Élysée Treaty Debates, hosted by The Embassy of France and The Embassy of the Federal Republic of Germany, in collaboration with American University and George Washington University.

The Loyola debaters were among thirty teams nationally selected to participate in the event, and the pair defeated teams from Cornell, Penn, and Western Washington University to get to the quarterfinals.  “We were honored just to receive the invitation from the French and German Embassies,” commented Kraft, “I am thrilled that Joe and I have won this all-expense paid trip to Europe. This is an opportunity I would never have had without my participation on the debate team.”

Loyola’s debate coach David Romanelli said: “I am very proud of Joe and Phil, their success is emblematic of the quality of students we have here at Loyola.”

The debates marked the 50th anniversary of the Élysée Treaty, which heralded a profound and historic change in the relationship between France and Germany. In their ongoing cooperation, Germany and France have secured enduring peace in Europe for over six decades.  Judges of the debates included diplomats and scholars from France, Germany and the U.S.

“This tournament was rewarding in many ways; as a first year student to have the opportunity debate some of the top schools in the nation in front experts in the field of foreign affairs was a very rewarding experience,” said Carroll.

The two will embark on their tour of Germany and France in late May.