Loyola Reaches Out to Bhutan 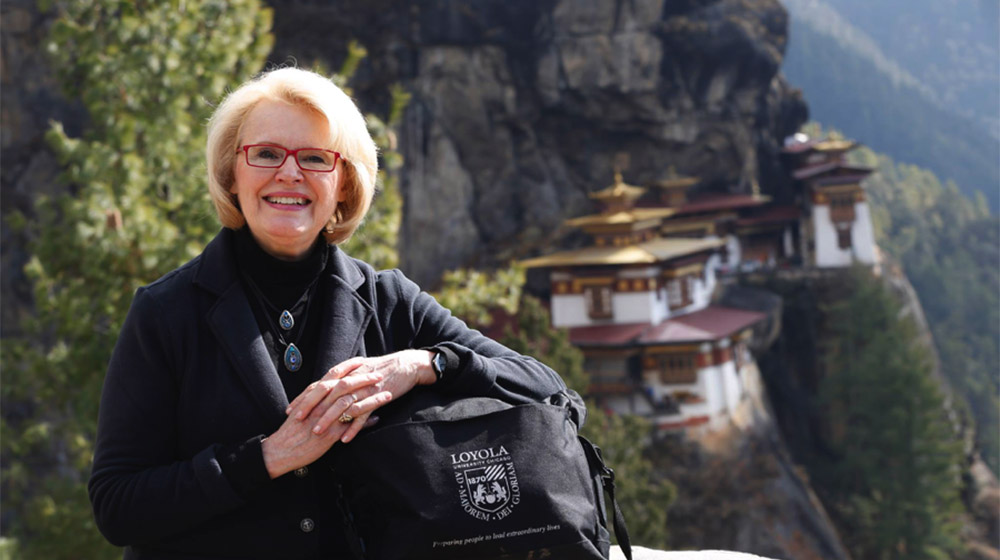 If you Google “World’s Most Dangerous Airports,” Paro Airport in Bhutan will be found on nearly every list. Located deep in the Himalayas, the tiny kingdom’s only international airport requires that pilots be specifically trained to maneuver through the narrow valleys and land on its notoriously short runway. 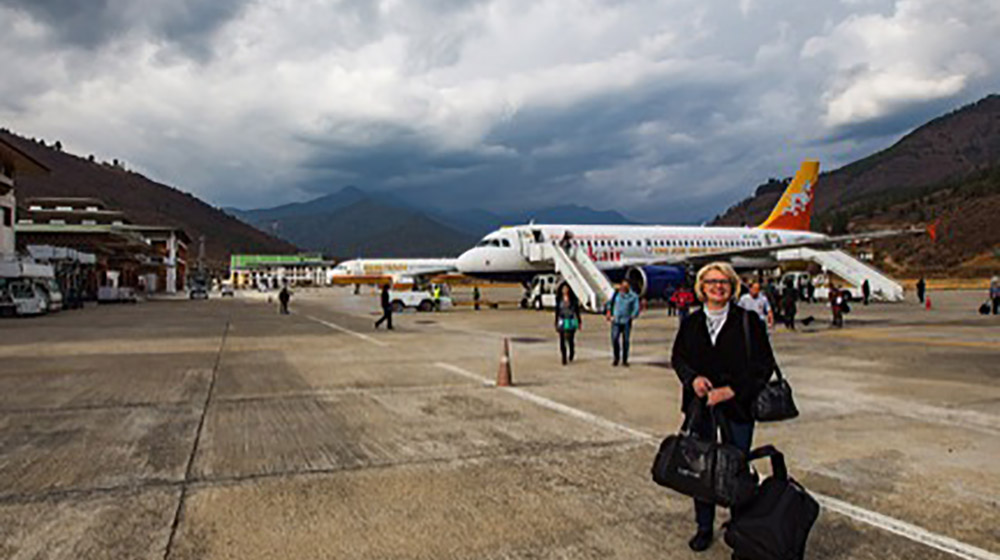 Paro, Bhutan – one of the world’s most dangerous airports

For Jill Geisler, Loyola’s Bill Plante Chair in Leadership and Media Integrity, once the plane’s wheels touched safely in Bhutan last December, a new adventure was just beginning.  She would see stunning sacred places laced with colorful Buddhist prayer flags, breathtaking scenery and meet leaders on the front lines of journalism in an emerging democracy. 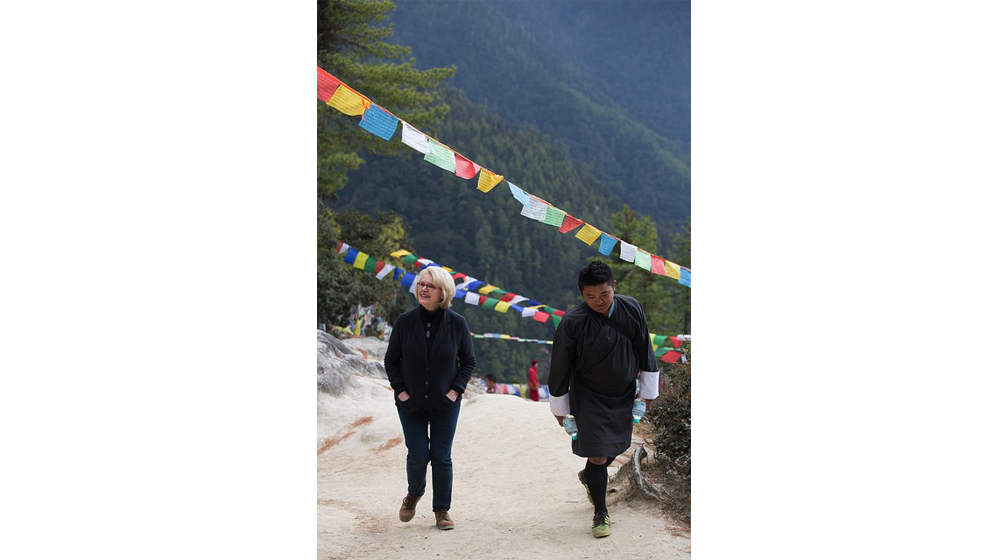 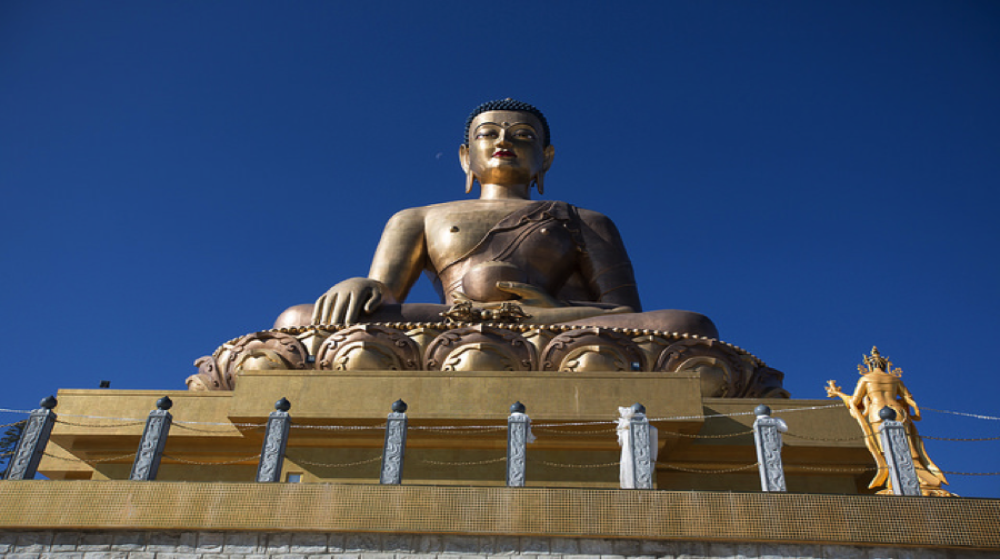 The Buddha Dordenma statue in Thimpu is one of the largest in Bhutan. 125,000 smaller statues of Buddha are stored inside.

In recent years, Geisler has conducted leadership training in the US for international journalists, including some from Bhutan.  The story of their homeland fascinated her. Largely an insular, agrarian country, Bhutan’s media growth is relatively new, with television and Internet first introduced in 1999.  The country became a democracy in 2008, after the King of Bhutan decided it was time for his people to be self-governing and better connected to the outside world.

Bhutan residents outside a Buddhist stupa, (shrine) in Thimphu

A cornerstone of a democratic society is an independent press, and the Bhutan Media Foundation was formed in 2010 to nourish it.  Last year, the foundation invited Geisler to its country to work pro bono with emerging leaders in media.‌‌

“My goal was to improve the journalism by improving the leadership.  We do our best work when we have leaders who are good at what they do, who are invested in our success,” Geisler said. “Motivation is universal. The ability to motivate people doesn't change whether you're in Boston or Bhutan.” 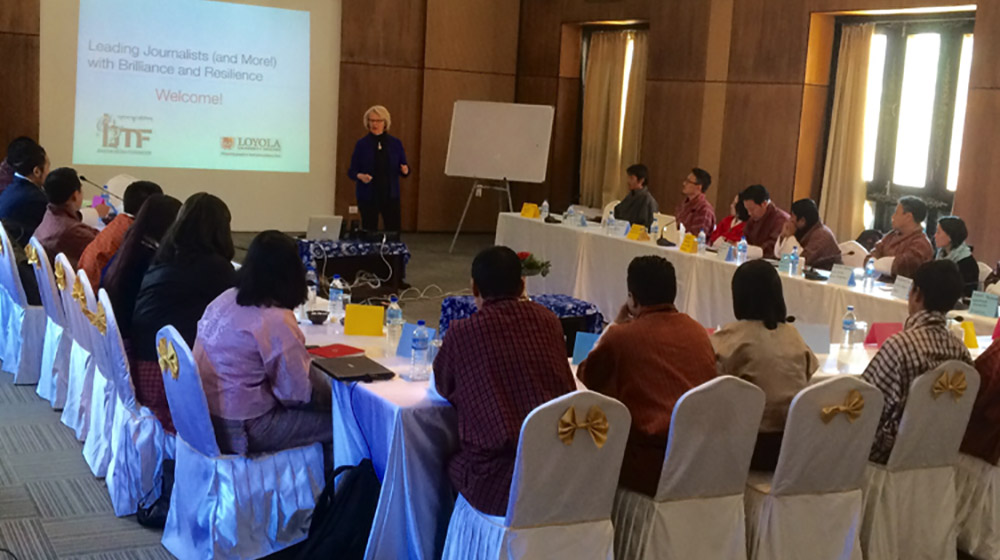 Participants in the workshop wear required Bhutanese business attire, a “Gho” for men and “Kira” for women.

Over several days, Geisler worked with the Bhutanese journalists on leadership and ethics issues, with an additional focus on leading investigative and in-depth journalism. One issue discussed was a reporting on a proposed change of the tourism policy in Bhutan, which is tightly controlled in an effort to maintain the pristine environment. This relates to their strong Buddhist philosophies and the idea of Gross National Happiness.

“What they are saying is every decision that they make as a country needs to be weighed against how it would affect the happiness of the average person, the environment, education, and job opportunities. Tourism was a good example of that. If we increase tourism but hurt the environment, that will not contribute to Gross National Happiness,” Geisler said. 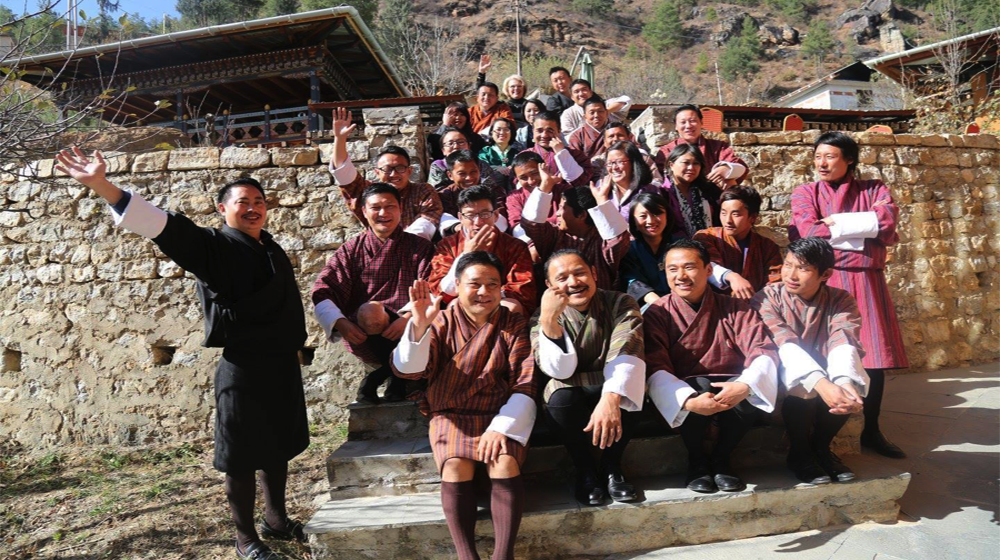 The class photo: Media leaders in the land of Gross National Happiness.

Dawa Penjor, Executive Director of the Bhutan Media Foundation, said the organization was very pleased to have Geisler visit and teach: “She was the best trainer BMF had hired over the past years. Her experience, expertise, and energy to teach and make people learn, captivated the participants from day one. Everyone learned and enjoyed Jill's teaching and had excellent feedback. To hear praises from a bunch of quizzical newsroom managers is pretty rare. She not only taught and shared her experience, but coached and managed to change the way the newsrooms in Bhutan will function.” 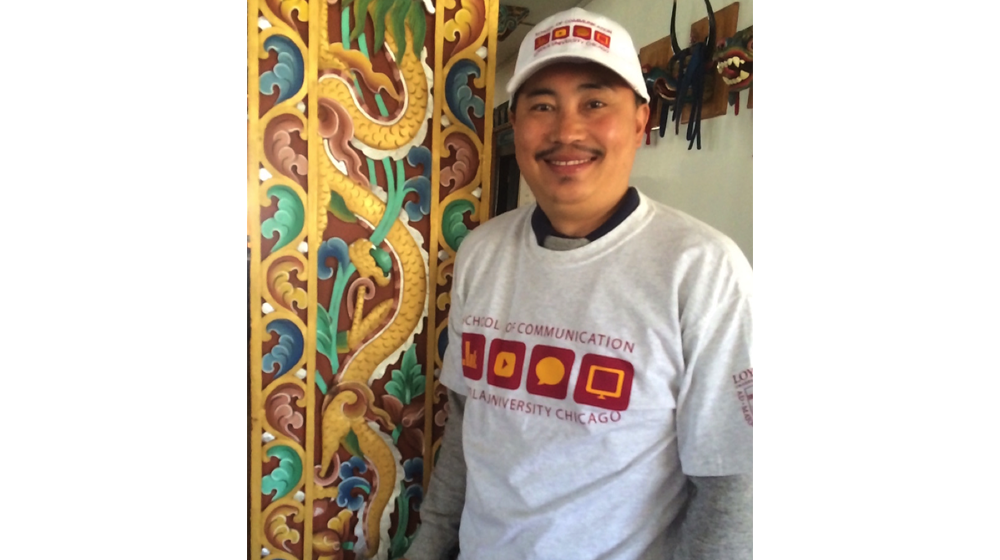 Geisler hopes to return to Bhutan when her schedule permits. She also recruited a colleague to travel there as a volunteer newsroom trainer this spring. Meanwhile, Geisler will continue to teach current and future leaders at Loyola and around the world, and in doing so, will put Loyola’s values into practice.

Jill Geisler carries Loyola along on a trek to one of Bhutan’s most venerated and elevated sites (over 10,000 feet), the Tiger’s Nest Monastery in Paro.

“What better alignment with the Loyola’s mission of social justice than to put our resources into areas that might be improved by whatever we have to contribute,” Geisler said. “It was just an honor to be Loyola's reach, Loyola's touch as far away as Bhutan.”