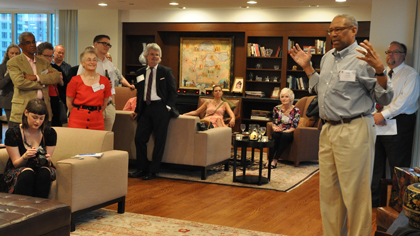 Instructor of journalism, Pulitzer Prize finalist, and longtime Chicago Tribune editor Don Wycliff retired from his journalism career this year, and Loyola’s School of Communication saw it fit to throw him a party.

Dozens of Wycliff’s former students and colleagues—whether they knew him from Loyola, from his time at the Chicago Tribune or even from his undergraduate days at the University of Notre Dame—came out to the swanky penthouse celebration at the Pere Marquette Suite on September 4 to celebrate his career.

No party would be complete without gifts. School of Communication Dean Don Heider presented Wycliff with an “old-school tablet” and an “old-school laptop”: a diary and a typewriter, respectively. 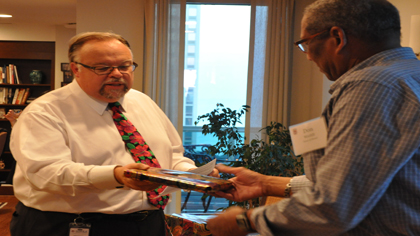 Wycliff’s career included writing for the New York Times, Chicago Sun-Times, Dallas Times-Herald, and Chicago Daily News, prior to his positions at the Chicago Tribune. At the Tribune, he served as public editor from 2000 to 2006, and as the editorial editor from 1991 to 2000. After that, he was vice president of news and information at Notre Dame before joining the School of Communication faculty at Loyola in fall 2008.

While at Loyola, Wycliff taught Reporting and Writing, Ethics & Communication, Feature and Opinion Writing, Historical and Critical Issues in Journalism and Journalism in Race. He also launched an after-school tutoring program between Loyola’s journalism program and several Chicago public schools.

Wycliff never let this experience and prestige get to his head. He was always kind to his students and took them seriously, according to Chicago Tribune editorial board coordinator and former student of Wycliff, Jessica Reynolds.

“He always gave his students an opportunity to argue our opinions, and he listened to us,” said Reynolds, in her farewell speech to Wycliff. “It was amazing—he listened to 20-somethings!”

Reynolds also gave thanks to Wycliff for her current job at the Chicago Tribune, because he helped her a tremendous amount in securing her position. She attributed her preparedness for her job to Wycliff’s teaching style as well.

“Some professors are easier on their students, and he wasn’t,” Reynolds said. “He treated all of us like we were real reporters for the Chicago Tribune.”

Marcia Lythcott, who worked with Wycliff at the Tribune as well, can attest to his high expectations that helped make the Tribune so reputable.

“He wanted 150 percent from everyone,” Lythcott said.

Lythcott joked that she “gave him migraines” because she only wanted to give 100 percent, but the two of them remain “the best of friends.”

Along with students and colleagues, Wycliff’s wife, Pam Shafer-Wycliff, adores him as well.

Shafer-Wycliff said that the two of them met on Yahoo! Personals in 2008, when Wycliff was still at Notre Dame. They both had busy schedules, as Shafer-Wycliff is a nurse, but they made it work.

“He does his thing, I do my thing, and we check calendars a lot,” Shafer-Wycliff said. “It has been very fun, going to all the different events that we get invited to.” 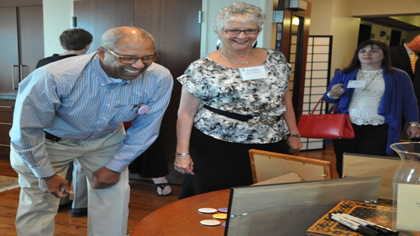 Now that Wycliff is retiring, he and his wife plan to take a workshop to become advocates for Court Appointed Special Advocates (CASA) for Children.

During Wycliff’s retirement speech, he emphasized his philanthropic goals, noting that if he had achieved what he wanted to at Loyola, we would have world peace by now. Wycliff gave thanks to his students and peers for helping him achieve part of his vision of making the world a better place.

“Thank god there are places like Loyola, and there are students like the students I have had who have allowed me to fulfill what I had from the beginning,” Wycliff said. “I guess the capstone of all this has been that I have had wonderful jobs, I’ve worked with terrific people at all the places I’ve been, and now, at the end of my working life, I don’t know that you could ask for a better life than that.”