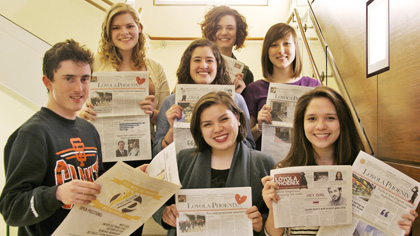 Both The Phoenix and Loyola’s student-run radio station, WLUW, brought home Mark of Excellence awards from this weekend’s Society of Professional Journalists (SPJ) Region 5 Conference. The awards recognized the best collegiate journalism of 2014 from Illinois, Indiana and Kentucky. SPJ will consider first-place winners from all of its 12 regions for the national Mark of Excellence awards competition in September.

The Phoenix won best all around non-daily student newspaper and best affiliated website. Editor-in-Chief Esther Castillejo and 2014 journalism graduate Jordan Berger were finalists in the in-depth newspaper reporting category for their investigation into campus crime and student safety.

“The last couple of years, The Phoenix has gone through an intense transformation,” said Castillejo. “It’s been about trying to find ourselves in the School of Communication and what we want to be as a school newspaper. We know we’re not the best newspaper in the nation yet, but this award now recognizes our efforts at striving to get there.”

Senior journalism major Liz Greiwe won first place in the newspaper feature writing category for large schools (10,000 or more students). Her article “Homeless or not, he’s got the month of May” described homelessness in Chicago through the experiences of Lenny Scroggins, who has a penchant for singing The Temptations’ “My Girl.” Greiwe said the award will be much more than just a line of her résumé.

“It really strikes home,” said Greiwe. “When you’re writing and you’re reporting, you don’t think [about awards]. It’s an honor and you feel grateful to the people who read your work, and especially the people who edit your work.”

WLUW won first place in the radio sports reporting category for 2014 journalism graduate Joe Flaherty’s coverage of Loyola's men’s volleyball team’s run to an NCAA championship. WLUW’s Lunchtime News –– a five-minute weekday broadcast that airs during the spring semesters –– was also a finalist for best all-around radio newscast for its broadcast from March 8, 2014.

Tony Buitrago, the production director at WLUW, said the recognition from SPJ shows he is part of a good team.

“We put in a lot of blood, sweat and tears over the semester, and I think it does us some justice,” said Buitrago. “We’re going to get even more awards for what we’re doing right now.”

“It was an excellent demonstration of our journalism ability, talent and perseverance, and against some very stiff competition,” said Konrad. “Many of the schools we’re competing with have very large programs, and it should make all of [us] very proud … because we have dedicated resources, but also very dedicated students. In my 10 years of being an adviser, I think this year has shown the greatest strength as far as what our membership can accomplish.”