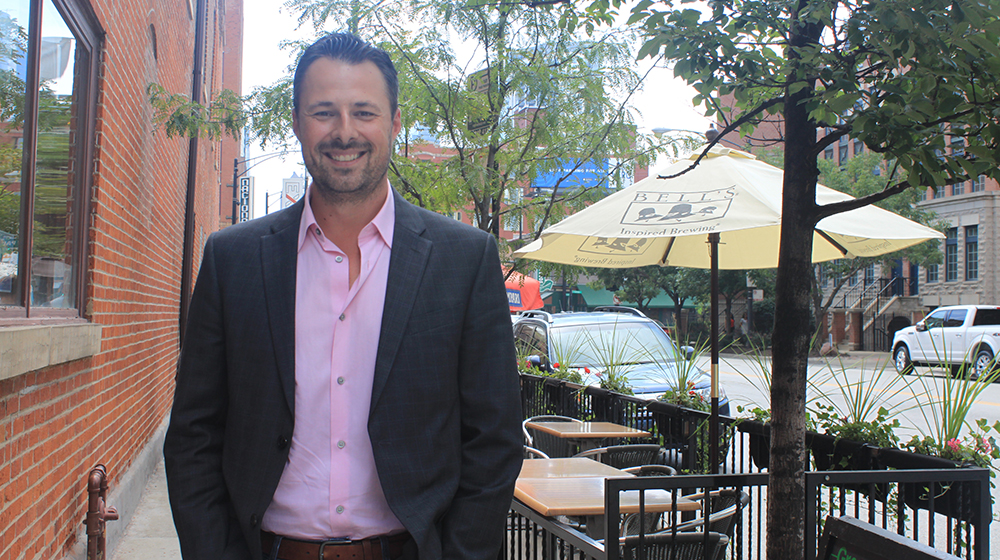 One week before graduating from Loyola in 1998, Michael Misetic thought he would have to take a job selling copier toner.

“There was nothing out there,” he said. “Folks at major PR companies weren’t going to hire a 22 year-old kid out of college with just one internship on his resume.”

Fast forward 18 years and Misetic is a managing partner of Franchise Elevator Public Relations, a company that aims to grow small businesses into widely known franchises.

His success however, is tempered by his modest claim of always happening to be in the right place at the right time.

In truth, he has fueled more opportunities for himself using his outgoing persona and sincere adoration for public relations rather than luck has.

“I love what I do,” Misetic said. “There’s very few people in this world I think who truly, truly love what they do. I couldn’t see myself doing anything else.”

But that’s just the condensed version. To fully convey how much he loves the work he does, Misetic, like a true salesman, uses an artistic spattering of pathos, statistics and rapid, passionate sentences.

“My clients, the founders of these companies, they’re moms and dads. These are people who sacrificed everything to take an idea they had and build it into something,” he said.

“Franchising employs almost 10 million people in this country. It generates over $500 billion to the U.S. economy. People don’t realize that. I’m doing my part to try and get people employed in this country though PR. We’re creating jobs.”

But Misetic’s zest for public relations was actually discovered by his cousin Ana Misetic, who received her Ph.D. in Chemistry from Loyola in 2000.  She came to him during a time when his priorities were askew and he had declared a Political Science major with the vague intention of becoming a lawyer.

“I’ve seen what you’ve written—it’s great,” she said. “I’ve seen you speak in public—you’re good at it. You’re not shy—you’re very extroverted…You should do PR.”

So he switched majors. Much to his dismay, many communication courses were held in the Sullivan Center at the time. While trekking across campus in bitter temperatures, he thought— like all students who have winter classes at the Sullivan Center— “Why am I torturing myself?”

On the verge of graduation when job search panic was setting in, Misetic caught the attention of a woman who knew about a job opening in the Croatian embassy in Washington, D.C. by presenting in both English and Croatian at an event. Within a matter of days, he was offered a position as a press officer at the Croatian embassy, packed his things out of his parents’ house and moved to Washington, D.C.

“I went from just graduating college to doing meetings in the White House and State Department. It was the coolest experience I have ever had,” he said.

After only a few months in his new position, Misetic interjected in a conversation he overheard in a bar. Two women were discussing where to hold a ceremony for Miss D.C. to be sent off to the Miss America competition when Misetic suggested it be hosted at one of the extravagant mansions on embassy row.

After positioning the embassy to host a reception, he stayed in contact with the Miss America organization and did some pro-bono work. Later on, the organization offered him a chance to return home to Chicago to work at a small PR agency, where he stayed for eight months before taking a job in the market development department of the Chicago Transit Authority.

After about five years, Misetic transitioned to Fishman Public Relations, where he rose to vice president and stayed for nine years. When the founders asked him to join them in starting a new company—Franchise Elevator—he accepted and has been generating business there ever since.

Event though he doesn’t get to do it much anymore, Misetic’s favorite part of the job is still pitching to media.

“I love getting on the phone and talking to reporters and trying to convince them that a story on my client is something they should do,” he said, grinning at the mere thought of taking on the challenge. “You’ve got 30 seconds to keep their attention. Once you have that, its smooth sailing.”

“I wouldn’t be where I am today if it wasn’t for Loyola. People are very impressed when I tell them I went there. Loyola is a phenomenal school,” Misetic said. “I made a lot of great friends at Loyola. I met my wife (Linda Bursic, class of 1997) at Loyola …There’s just something about Jesuit education that feels like home. It felt like you knew everybody on campus.”

Graduation day is his fondest memory of school. “My [immigrant] parents gave me everything. But more than anything they gave me the opportunity to educate myself. The diploma might have had my name on it, but it was theirs just as much as it was mine.”

To future communication professionals, Misetic has a few suggestions: Be buttoned up. Your physical appearance should reflect what your work will look like. Find a mentor. Pass out business cards even if you don’t have a job. Connect with the people you meet on LinkedIn. Take the time to send hand-written thank you notes. Remember that nobody owes you anything.

And, work on your handshake.

“There’s nothing worse than when somebody is shaking your hand and they’re looking around the room to see whose hand they want to shake next,” said Misetic.