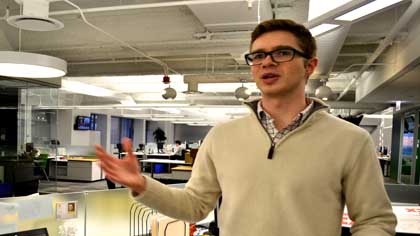 Loyola School of Communication (SOC) alum Evan Fazio shakes hands with a purpose and uses “ums” and “likes” sparingly. He’s a connoisseur of words, quick to quote Abraham Lincoln or poet Carl Sandburg. And it works for him. After all, he’s a public relations professional; he deals in the trade of words.

A few months after graduating from Loyola in spring of 2012, Fazio landed an internship at Chicago-based public relations firm GolinHarris. The internship turned into a full-time job offer in healthcare public relations less than three months later. It’s been a year now, and Fazio said he’s still happy to be there.

He looked at home in the open floor plan office, settling into a wide modern chair in sparsely decorated meeting space Fazio called “the living room.” On a sunny day, Lake Michigan’s blue deepens and blooms through the room’s windows.

It’s a sight that could make anyone fall in love with Chicago.

“It’s the city of big shoulders,” Fazio said, hinting at Carl Sandburg’s poem ‘Chicago’ and the city’s “husky, brawling laughter.” A charcoal rendition of the poem hangs in his kitchen. 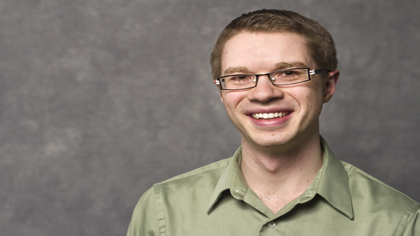 Even though he’s a Midwesterner, Fazio didn’t grow up in Illinois. As he puts it, he’s from “the greatest city in the greatest state, Minneapolis, Minnesota.” But Fazio said he had to leave Minneapolis for college or he’d never move away.

“Chicago seemed like it had the urbanity of New York and the Midwestern hospitality of Minneapolis,” said Fazio. That’s part of the reason he set his sights on Loyola.

For most of his time at Loyola, Fazio said he worked himself down to the bone “probably more than I should have.” He double majored in philosophy and advertising and public relations and tacked on a music minor.

“I had a mind, body and soul approach: philosophy was for my mind, music was for my soul and Ad/PR was for my body,” said Fazio. “I need a roof over my head.”

Outside of class Fazio was a member of the philosophy club and performed with Loyola’s jazz band and wind ensemble, playing guitar and clarinet respectively. He spent any other spare time playing in the band Mapmaker.

His hobbies haven’t changed much. These days he sings with a church choir or as he explained it, takes “glorified voice lessons.” He’s on the “Mount Rushmore Tour,” a challenge he and his roommate concocted. The two are steadily working their way through the biographies of the presidents on Mount Rushmore. Fazio only has Washington left to read.

His latest obsession is chess. “I play chess like other people play bejeweled blitz,” he said. Even the background of his desktop computer was chess-themed.

Fazio seems to have an insatiable hunger for knowledge. If his recent excursion into French peasant cooking reveals anything, he’s not one to shy away from a challenge.

“He had that relentless positive attitude which is a great predictor of success in PR,” said Loyola Public Relations Professor David Kamerer, who had Fazio in a few of his classes. “I definitely could tell that Evan was an old soul when I met him.”

Kamerer said Fazio did well in his new media campaigns class because Fazio was analytically oriented. Those skills carry over to his job as an Associate, Catalyst at GolinHarris. Fazio’s job requires him to be “well written and well spoken.” He spends his days consulting clients, planning timelines and taking care of any issues that pop up along the way.

At times his duties extend beyond the strategic realm and move more into a what GolinHarris calls a “connector” role. Fazio will sometimes pitch ideas, deal with media and help clients find the channel that best spreads their message. Mostly though, Fazio is the guy executes the client’s campaign. He has a special blend of solid interpersonal skills and tactical thinking that help him pull all the parts together.

Fazio said he felt prepared for this type of work thanks in part to SOC professors and classwork. His school projects had real world application, and the people were always focused on his career, Fazio explained.

The philosophy degree didn’t hurt either. It’s a major that breeds ethical and analytical judgment. Plus, “It never hurts to quote philosophy in a meeting,” Fazio said.