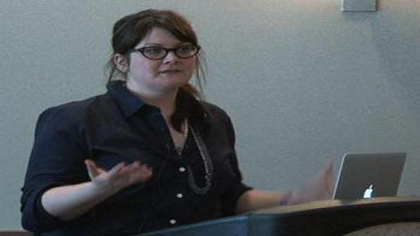 When Loyola Digital Communication Assistant Professor Meghan Dougherty tries to explain archiving the internet, she resorts to an archaeology metaphor: if an archaeologist finds shards of a bowl during a dig, he can take a stab at what it is made of, its age and its purpose. But he’ll have a hard time gluing the whole thing back together.

Dougherty faces the same challenge, except her excavation site is the internet, and her chunk of pottery happens to be a handful of data.

“I’m interested in how the history of the web gets written and how it gets studied,” said Dougherty, who is on leave from Loyola’s School of Communication (SOC) to research web history and internet archiving methods.

As part of her research break, Dougherty will work with Director of the Centre for Internet Studies (CFI) Niels Brügger at Aarhus University in Denmark. The two will present their research at a CFI seminar in April. Dougherty will also devote some of her time to digging through archives, libraries and racking web archivists’ brains throughout Denmark, Great Britain, France and the Netherlands.

“For a number of years Meghan has been one of the most promising young scholars working with the questions related to web archiving,” said Brügger in an email interview. “In addition, she can contribute with an outside view on the practices of web archivists as well as of web scholars using the web archives.”

For now, Dougherty is focusing on her book on the same topic. She spends her days trying to understand how “researchers do research” and delving deeper into the kinds of traces people leave behind on the web. While Dougherty will spend much of her time in Denmark writing, these past few months have given her time to read deeper into the intersection of communication, history and memory.

Dougherty’s research is more nuanced than just mass data collection. As she explains, archived data is missing context; archivers can’t capture the bigger picture with just the details, so researchers’ ability to look at the web’s history as a whole is stunted and the data fragmented. Or to fit it into Dougherty’s archaeology metaphor: “You don’t know if you have 10,000 pieces of one bowl or 10,000 pieces of 10,000 different bowls.”

Tackling this issue is a task fraught with ever-changing definitions and never-ending questions. “We haven’t figured out what is content versus structure,” Dougherty said of sorting through online data. “We still don’t quite know how to dig into those pieces of evidence.”

Dougherty and her colleagues also face problems with companies’ shifting terms of service. Because of privacy concerns, many social media platforms like Twitter have changed their data policies. Now Twitter users’ data is hidden in the company’s “walled garden,” and researchers can no longer study certain online phenomena like hashtags over several years to see changes in group communication.

‌“That’s the nature of science, you’re supposed to go back and test these findings in new situations,” said Dougherty. “By creating these closed systems, we are cutting off our ability to continue science in some ways. In the end, we’re denying ourselves access to our own information.”

And while the idea of collecting so much data seems overwhelming enough, these issues fall flat compared to a larger problem.

“The biggest challenge is not the size in itself, but rather the ‘messiness’ of the online web,” said Brügger. He explained that web content and software change so quickly, it’s difficult for archiving technology to keep up.

That difficulty hasn’t stopped Dougherty. Through her research, Dougherty said she hopes to figure out what it is researchers can come to know from internet history. That way future researchers will have a foundation to work from.

For now, however, Dougherty’s work provides more questions than answers.

“These ideas that we work with are big, and they need space and time to come together and work themselves out.”