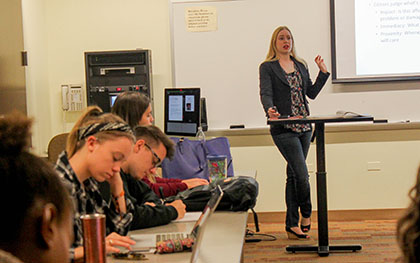 In Spring of 2010, LeeAnn Shelton was sitting in a classroom at Loyola, finishing her journalism classes and working as editor-in-chief of The Phoenix.

Fast forward a little more than four years, now she’s a successful reporter working for the Chicago Sun-Times and now teaching a class at Loyola.

Shelton completed her bachelor’s degree in journalism at Loyola in 2010.  While still holding a position as a breaking news reporter at the Chicago Sun-Times, Shelton has returned to Loyola—this time, as an adjunct professor.

During Shelton’s undergraduate career, she was highly involved in writing for the Loyola Phoenix. Shelton got involved at the paper as soon as she possibly could. She knew from the start of her college years that she wanted to be a journalist.

“My freshman year, I turned in articles for just about every section except sports,” Shelton said. “Then, I got on staff as soon as I could. I eventually ended up being an assistant news editor, and then an opinions editor.”

By her senior year, Shelton had worked her way up to editor-in-chief. Shelton said that the level of professionalism from the students she worked with at the Phoenix was very high, and that many of them have gone on to do amazing things in the journalism industry.

Shelton said that one of her biggest goals is to pass along as much knowledge as she could to her younger peers at the Phoenix. She carries that desire to teach into her job at the Sun-Times as well.

“On the breaking news desk, we get a lot of younger people right out of college,” Shelton said. “I like getting them up to speed and teaching them everything that I wish I had known when I was in their shoes.”

When Shelton started at the Sun-Times, she had not even finished college yet, but she had an internship at the newspaper already under her belt.

A colleague of hers who had connections at the Sun-Times told her to put in her resume in late 2009, and she got a call back right away. Unfortunately, she was at home in Colorado for Christmas break.

“They called me and asked how soon can I get here for an interview,” Shelton said. “I said, ‘Mom, we have to change my flight.’ I hopped on a plane as fast as I could, landed in Chicago, went to my apartment, got some nice interview clothes on, went there, did my interview, and they hired me right there.”

As a professor, Shelton is all about pushing people out of their comfort zones. Shelton recalled being an intern at the Sun-Times and constantly having to call police stations and other places on her news beat to see what was going on. She said that it was uncomfortable at first, but she got used to it. It was such an important part of her learning experience that she said she wants to make sure each of her students has a chance to become “familiar with the uncertain.” 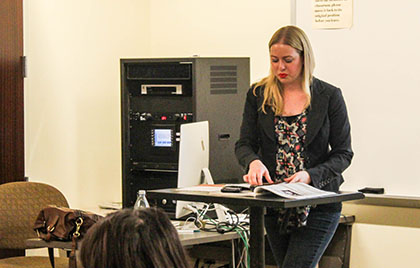 Shelton owes more than just her education and job to Loyola. She also met her husband at the university, on the second floor of Simpson Hall. Shelton said that her family is “really a Loyola family right now,” and that she is grateful for everything the school has afforded her and her family.

“My husband is actually a graduate student here in the school of social work,” Shelton said. “Oddly enough, he’s taking a class at the same time I’m teaching my class one day a week.”

As a child, Shelton was always on the move. She took classes in many styles of dance, taught ballet classes, and even danced competitively—all while juggling schoolwork. She attributes her ability to manage editing the Phoenix and working for the Sun-Times while completing her education to the fact that she learned to budget her time when she was young.

Shelton said she would encourage anyone to be as involved as possible.

“I think that anyone who is really into a sport, an art or an activity when they’re young learns so much discipline,” Shelton said. “It teaches you to follow through on your commitments and to budget your time effectively so you can do everything expected of you.”