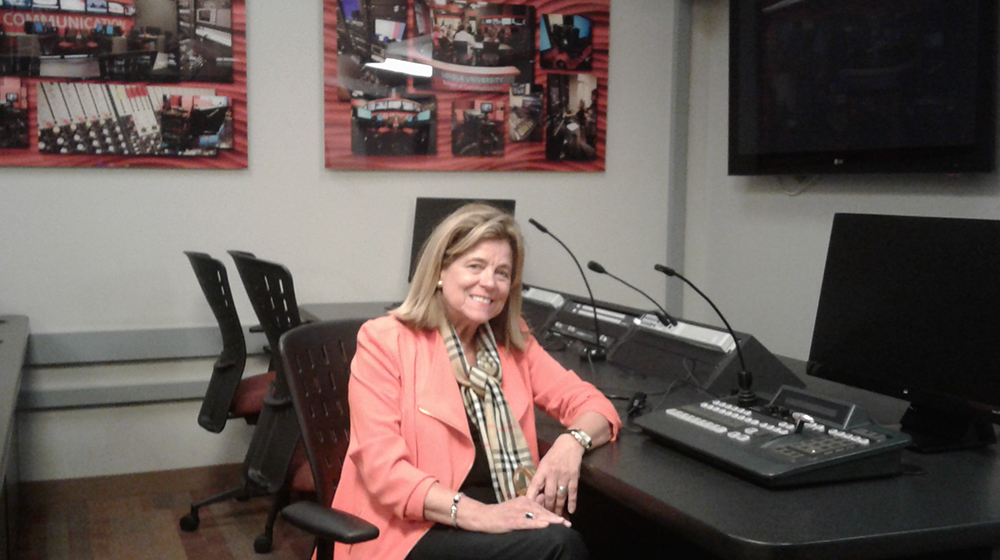 In her 15 years at Loyola, Beth Konrad has been a force of nature in developing the School of Communication and pushing her students to become skilled media professionals. When she retires at the end of the fall 2016 semester, the multimedia journalism program director will be missed by students and faculty alike but will continue to be unstoppable in her new pursuits.

“I’ve had a 15 year experience of amazing students, supportive and creative staff and faculty at Loyola. It’s been fulfilling and gratifying but I want to fulfill another important goal in my life by returning to my home town of Detroit and work in education and community service.”

Before joining Loyola as a part-time adjunct professor of journalism, Konrad had a prolific, varied career that poised her to teach from experience. The award winning reporter, news director, entrepreneur, corporate executive and social advocate brought an insider’s perspective to students, enabling them to better understand the tenacity required to be successful in the media industry.

“I’ve known Professor Konrad since my freshman year when I joined the Society of Professional Journalists. She’s always been there as a mentor and as someone to give advice whether I was in a class with her or not,” said senior journalism major Grace Runkel. “In all three classes I’ve had with her she’s pushed me and everyone else to perform at their best. Sometimes she’s hard on people but it’s coming from a good place because you need to be pushed to perform at your best level.”

During her tenure, Konrad played a major role in growing Loyola’s journalism program from a few course offerings with limited resources to a complete major area of study with an elaborate downtown campus. Part of this effort involved resurrecting Loyola’s Society of Professional Journalists from a dormant organization into one of the top chapters in the region.

She recognized the great potential for a journalism program in the city’s epicenter and helped develop the vision into reality.

“This is a training ground for anyone who wants to be a multimedia journalist,” Konrad said. “We are in the third largest media market in the United States. This is a huge, huge news town, a huge media playground. That is enormous. It’s the difference between Loyola and going to school in Iowa.”

Achieving all the progress that she has while teaching 10 different classes and tending to side projects has taken perseverance. But she also acknowledges the support she has received.

“If you can find one other coworker who really believes in you and is of like mind, that really is an enormous boost and that’s [Associate Dean] John Slania. I think in some ways we’re like zygotes in what we want to do because we were of like mind of what our vision was,” Konrad said.

And Slania has a similar affection for Konrad.

“Beth is fiery. She is passionate. And I appreciate that passion because she really loves her students,” said Slania, who rose through the ranks at Loyola alongside Konrad.

“There was a time when a student had a job interview at WTTW Chicago Tonight but she couldn’t get there. So, Beth put her in her car and drove her to the interview, waited for her to finish and drove her back. That’s the kind of passion that Beth Konrad has and I’m going to miss it. I’m going to miss her a lot because she has been a good friend of mine and a great colleague and has done a good job teaching her students.”

“I happen to like this demographic,” she said. “Millennials look at the world in a way that’s totally different than other generations and needs to be understood, embraced, and engaged. Believe me, if teachers do that—if our society does that, it will be an unbelievable transformation in our society.”

Konrad is returning to her hometown to be part of Detroit’s rebuilding and resurgence from bankruptcy. She plans to consult and volunteer with several non-profits and Wayne State University to help facilitate an inner city news media lab.

“It’s going to be fun,” Konrad said. “This gives me an opportunity to go back home and reunite with old friends and colleagues, still work with students and have more leisure time. But make no mistake, Chicago and Loyola will forever be in my heart.”