It’s all about taking initiative 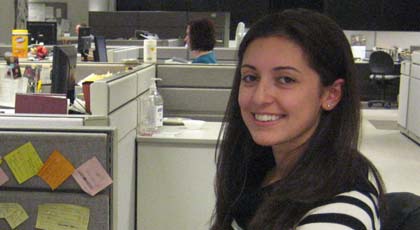 Jessica Cilella always knew that she wanted to write for a newspaper and within a year of graduating from Loyola, that’s exactly what she was doing.

Cilella was hired as a general assignment reporter for The Daily Herald several months after graduation. A traditional reporting role is hard to come by in the changing landscape of news media, but Cilella said that this opportunity was her “dream job.”

However, Cilella didn’t get there by chance. As a freshman she began writing for the Loyola Phoenix and worked her way up to news editor by her senior year. She was involved with the Society of Professional Journalists and served as the vice president of the SPJ E-Board as a senior. As helpful as those things were, Cilella said that it was her tenacity that made the difference.

She said, “I think the biggest thing as a student from the 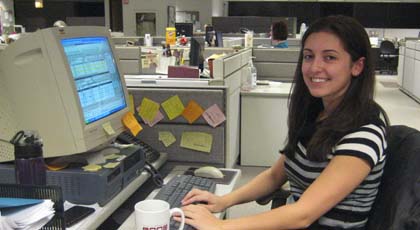 Cilella added that writing for the Phoenix gave her hands on experience that she feels is important for aspiring journalists.

“Get experience while you’re at school,” Cilella said. “I learned as much working for the Phoenix as I did in class; I got so much hands on experience that you can’t learn in the classroom and goes for any of those opportunities that Loyola offers.”

She used SPJ as an outlet to network and make contacts. As a sophomore Cilella attended the Lisagor Awards hosted by Chicago Headline Club, the professional chapter of SPJ.

“I remember I went there and I met the person who I had just recently sent my resume to for the WGN internship and I was like ‘Okay, I’m going to have to say something to him,’and I spoke up,” Cilella said. “It was great to meet him in person and he wrote down my name and said he would keep an eye out for it. I think that was a way that I got into that.”

Most young journalists apply for many different positions at many different publications or stations before they land a place at a station like WGN. Cilella said that she could have been just another resume in the shuffle had it not been for her determination and willingness to speak up.

“You have to be persistent when you turn in a resume; you have to look up a phone number and call people,” Cilella said. “Everyone does everything over the Internet now, but your information gets lost that way. You need to call and meet them in person in order to stand out.”

Through Cilella’s hard work and determination she was able to get the job that she had always wanted, however she cautioned young journalists about becoming too entrenched in one vision of their future.

“I’m really at my dream job and I’m so thankful for that but I really think that people need to open up their minds to these different avenues in journalism and if you tell yourself this is the only route I want to go, you’re kind of setting yourself up for failure. It’s going to be very difficult to find your dream job right after school, but you can do it.”