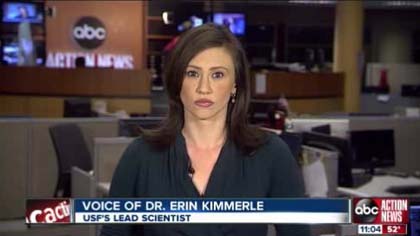 As many good journalists know, hard work and determination pay off when investigating and covering stories. For Loyola alum Jacqueline Ingles, this has proven especially true.

“I just continue to persevere everyday and fight for better and bigger stories,” said Ingles, who graduated with a degree in journalism in December 2006. “The fact that I come in every day and that passion is still there, that’s one of my biggest accomplishments.”

Ingles’ passion for journalism led her to recently win a National Headliner Award for her breaking news coverage of a 50-car pile-up on I-75 and a Florida Associated Press (AP) award for her investigation of a teacher falling asleep and leaving her class of disabled students unattended.

“I’m not surprised [she won the awards]. It’s fantastic and it’s a testament to her innate talent supplemented by a really strong work ethic,” said Phil Ponce, a distinguished professional in residence at Loyola’s School of Communication (SoC), the anchor and managing editor of news for WTTW-TV in Chicago, and host of Chicago Tonight.

Ingles’ attributes part of her success in winning the National Headliner Award with being at the right place at the right time.

“I was headed down on I-75 with my photographer to do a story in Sarasota [Florida] and all of the sudden, the traffic gets really backed 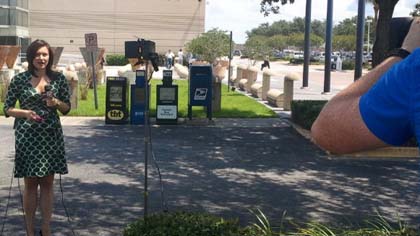 up and I see a helicopter drop on the interstate,” she said.

As she made her way through the traffic toward the front of the accident, Ingles said she knew covering this story would be more important than covering the one in Sarasota. She said she quickly pulled out her TVU Pack, a portable backpack that allows journalists to deliver live news, and started interviewing people who were involved in the accident.

“I felt like I had wings that day but I was also scared out of my mind,” Ingles said. “I had never done a live interview on camera before. I just remember being so scared because you have no script at this point — you’re just going off the cuff for five to six minutes at a time.”

However, when approaching these interviews, as well as others, Ingles said she thought back to a broadcast interviewing class she took at Loyola with Ponce. Ponce said he covered three important components of a good interview in his class: preparation, listening and reacting. “I think Jackie was so good at downloading that outline,” Ponce said.

Ingles added, “That really taught me a lot about approaching people to do interviews. Even now, I look back and pull some of the advice [Ponce] gave me from that class.”

Ingles ended up delivering three hours of continuous coverage of the event, which earned her third place for the National Headliner Award category, “Broadcast or cable television station’s coverage of a live breaking news event.”

On Saturday, April 27, the Florida AP awarded Ingles first place for general assignment reporting for her coverage of the teacher’s negligence.

“I don’t want to say [I was] shocked because it’s a word people use all the time, but I was taken aback by it just because of the talent pool I was in [for the award],” said Ingles, who has been working since June 2012 at WFTS-TV, an ABC affiliate in Tampa Bay, Florida. “When they said my name, it was unbelievable.”

After receiving ‌a tip about the story, Ingles began looking into it and discovered that the teacher told her students to turn the lights off so that she could fall asleep on her desk.

“I found out video was taken of the entire thing by the teacher’s aid,” Ingles said. “I got the video, … took it to the school district, and they said they investigated these claims and discovered they were unfounded.”

Although Ingles called the head of the school district to tell him that the tape exists and that the story was airing that night, he hung up on her and did not cooperate.

Ingles’ story, which she produced in just one day, aired and brought attention to the teacher’s negligence, as well as a larger issue occurring at the school.

“My reporting was part of a bigger portion that has led to the school district looking into how they train the people who handle disabled students,” she said.

Prior to working at WFTS-TV, though, Ingles worked at KXAN in Austin, Texas, for two and a half years. Ingles described herself as a “one-woman-band” multimedia journalist (MMJ) at KXAN, working 12- to 13-hour days, and writing web scripts, taking her own photos, and shooting and editing her own packages. 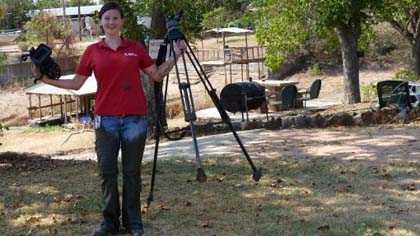 While covering a severe drought in Texas, Ingles decided to walk out on a dry lakebed in order to get a perspective photo of how low the water was compared to a previous year. “As I was walking out there with my camera and my tripod, all of the sudden, the ground goes out from under me and I’m neck-deep in mud,” she said. “I started panicking and the more I did that the more I sank.” ‌

After grabbing on to some reeds, Ingles was able to pull herself out of the sinkhole about one inch every few minutes. When she finally pulled herself out, she was sprayed down with a hose to clean all the mud off of her.‌

Although she said this was the most humiliating thing she has ever experienced, Ingles did not give up on the story.

“I went back to my apartment at about 2 p.m., loaded the clips in my computer and wrote the script. I remember it made it on air and CNN aired the story,” Ingles said.

In addition to this experience, Ingles also encountered another terrifying instance when she received a second-degree burn while covering the wildfires in Texas.

“I’m very aggressive in the field, and I was right up along with the firefighters,” she said. “The helicopter was literally 13 feet above me ready to drop the water when the [helicopter’s] blades whipped up an ember that landed right on my leg.”

With the skin falling off her leg, Ingles was still able to drive herself to the ER to get treated. While some people would have called it quits, she said she was on her phone writing the script as she was being treated in the hospital.

However, without building a solid foundation of knowledge and skills at Loyola, Ingles said she ‌would not be as successful as she is today. 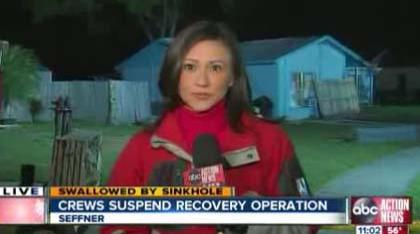 “A lot of where I’m at goes directly back to Loyola; if I wouldn’t have done well there, and taken those classes and opened myself up to those critiques, then I wouldn’t be where I am today.”

Ingles said the constructive criticism Ponce offered her was helpful when transitioning from the classroom into the journalism industry. ‌“It showed me how tough things can be. When Mr. Ponce would critique things, he didn’t hold back and honestly that’s really prepared me for what I’ve experienced in my career, because people are ruthless,” she said.‌

Ponce said Ingles took his critiques to heart and built on them in order to improve her work.

In addition to the skills she learned in Ponce’s class, Ingles said she took a few helpful women’s studies classes taught by SoC Professor Bren Murphy.

“She, like many people, came into the [introduction] class not really knowing or having a background in terms of gender studies and she was totally open to new ideas,” Murphy said.

Murphy said Ingles had an impressive ability to listen, ask great questions and articulate a stance different from other people.

“One of the things I say in my basic communication class is that the real goal of learning isn’t to accept what somebody else says, but you do have to be at least willing … and open to the possibility of change,” Murphy said.

Murphy added that many of the skills Ingles possessed and developed in her classes have been evident in her professional work. Thus, Ingles was able to build a strong foundation to grow as a journalist by taking her classes at Loyola seriously.

Ingles advised current Loyola students, “Your career is already starting when you’re in those classes. It’s building the foundation … You need to be in the mindset that the impression you give off when you go to class is the impression your employers are going to see.”