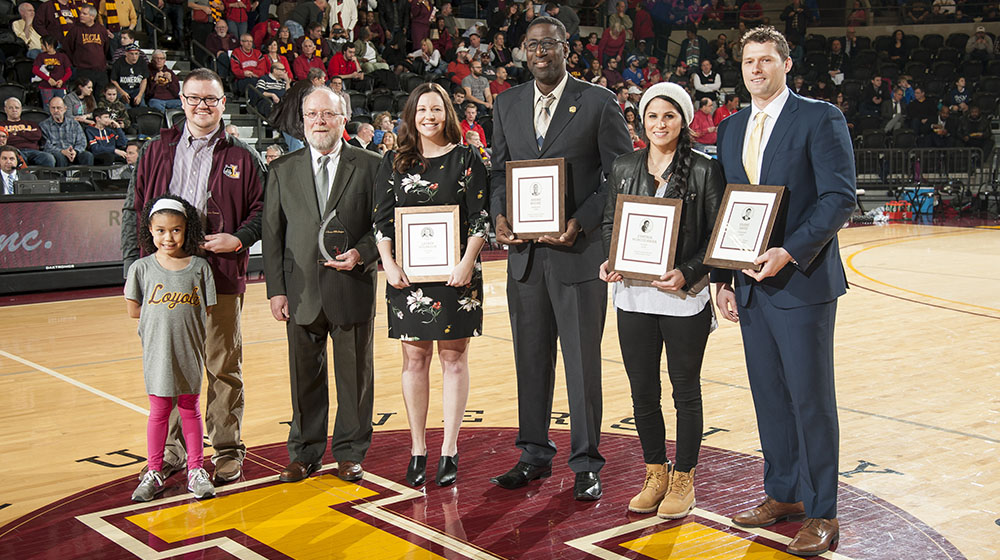 Brian McIntyre had a lot to celebrate.

First, he was among the sold-out home crowd Feb. 24 that watched the Rambler’s Men’s Basketball team close out the regular season with a victory, earning top seed in the Missouri Valley Conference tournament.

Then at halftime, McIntyre was presented the Fr. Finnegan Award as part of Loyola Athletics Hall of Fame. This award honors an individual who has made great contributions to youth through sport.

“I was taken aback, nothing I ever expected. To be honored by the university is a special honor,” McIntyre said. 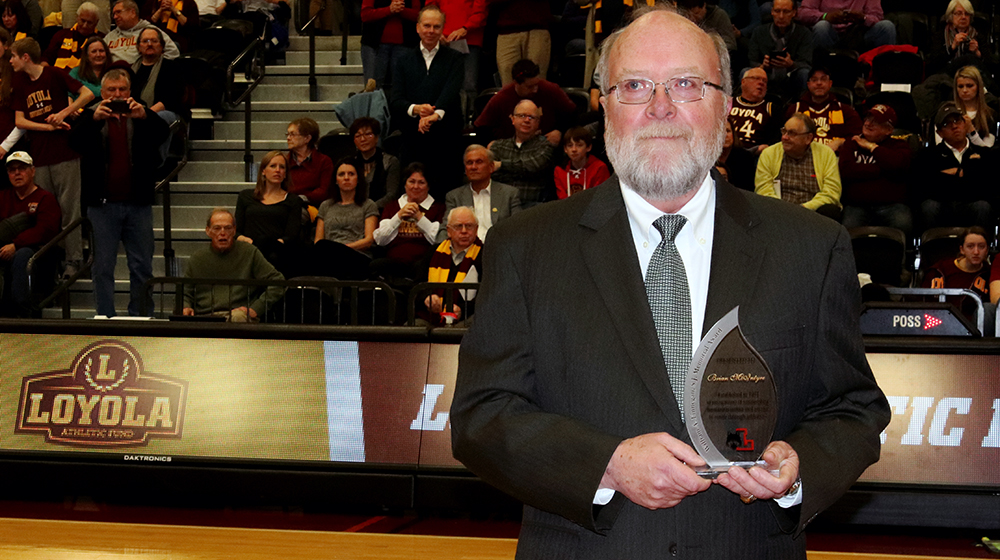 Like Sr. Jean Schmidt, the basketball team’s chaplain, McIntyre brings people together and adds comfortability to an environment.

Like Porter Moser, the team’s coach, McIntyre listens to the people he works with and he’s a fair leader.

And like the late Gene Sullivan, a legendary Rambler coach, McIntyre is an establishment-changing powerhouse who has left a lasting impression on Loyola University and basketball.

McIntyre launched many changes in communication policies for the NBA. He said he made changes that would build better communication by asking the players, coaches and media what they needed.

“You try to build relationships with people first so they believe what you’re saying,” McIntyre said. “When people work with you and they realize you’re trying your best … there’s a confidence that develops and a trust, and I believe that’s how you’re able to help people. I was fortunate, I came in when the NBA wasn’t all that popular. The league was open to a lot of ideas, we could change something on the drop of a dime, we could see something and run with it.”

McIntyre harnessed the confidence he gained from his mentors and worked diligently toward his goals. He has since helped many rising journalists and public relations students gain their own confidence by speaking at universities. One of McIntyre’s mentors was Gene Sullivan. Sullivan was the athletic director at Loyola Academy while McIntyre was a student and later led the 1984-85 Ramblers to the NCAA tournament.

“He was an inspiration to me and he gave me shots of confidence when he was my athletic director. He [Gene Sullivan] gave me a jolt of confidence that lasted a long, long time,” McIntyre said. “I’m forever indebted to Gene for listening to his student …  it’s [the Fr. Finnegan Award] a great honor, I don’t know if I deserve it as much as Gene [Sullivan] or Jerry Lyne another Loyola coach. I want to accept this award in their honor because they had such a huge role in my personal development.”

Dr. Tom Hitcho, the senior associate director of operations for the Loyola Athletics Department, was on the deciding committee for the Fr. Finnegan Award. He said the last time someone was honored with this award was 2006. 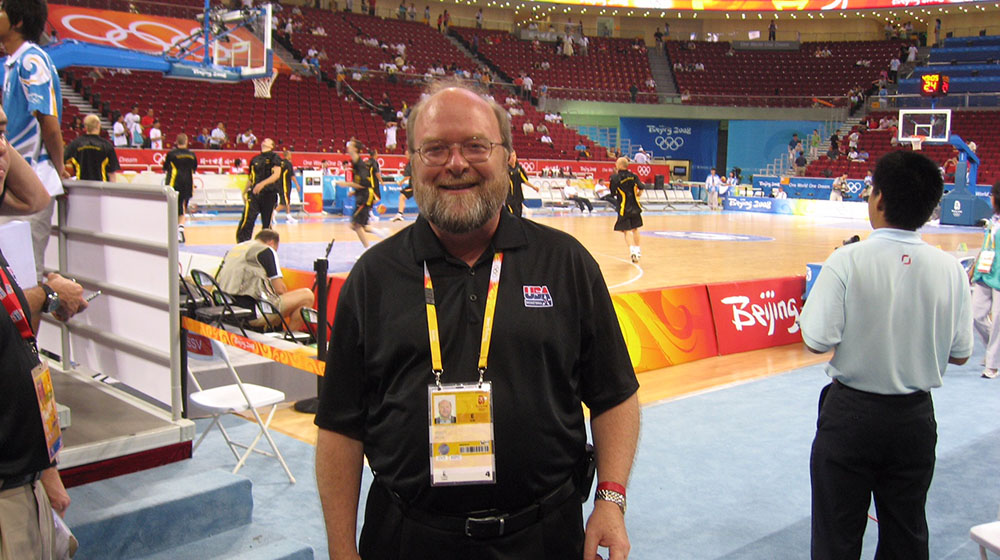 “Part of the Hall of Fame is we have two special awards, so we thought about who should be chosen for this award [Fr. Finnegan] and Brian [McIntyre] was heads and shoulders above everyone,” Hitcho said. “They did such a great job with the Bulls. The NBA office hired him and he just took off. … He was involved in the Olympics. He instituted the Sixth Man Award. White House visits. … In the world of basketball domestically, internationally, he’s one of the top guys.”

McIntyre began the Sixth Man of the Year, Most Improved and Defensive Player of the Year Awards.

When McIntyre attended Loyola University, he was the last sports writer for Loyola News, the original school newspaper, and the first sports editor for the Loyola Phoenix. He said he thought he wanted to be a beat sports writer so he would read 15-20 newspapers a day and study how the sports writers wrote, what they focused on and how they laid out their pages. 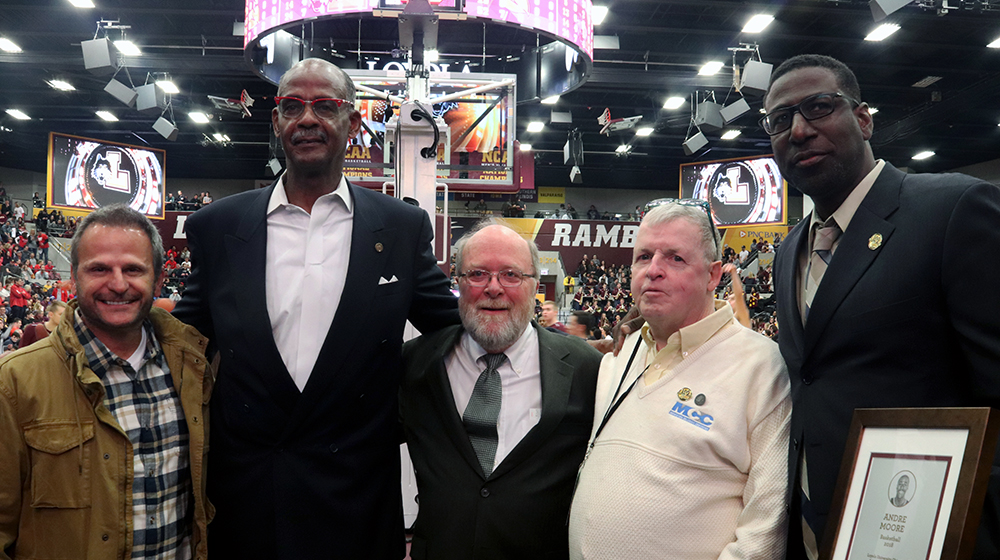 “When I got involved with the NBA it was a perfect match. I was able to match up my pitches with people who would be receptive to it,” McIntyre said.

McIntyre has received many honors throughout his career, but he said getting an award from his alma mater is hard to believe.

“To be able to bring some attention to somebody who’s kind of been in the background is pretty cool,” Watson said. “He may not have been a player, but he’s as well respected as anyone in the basketball world.”