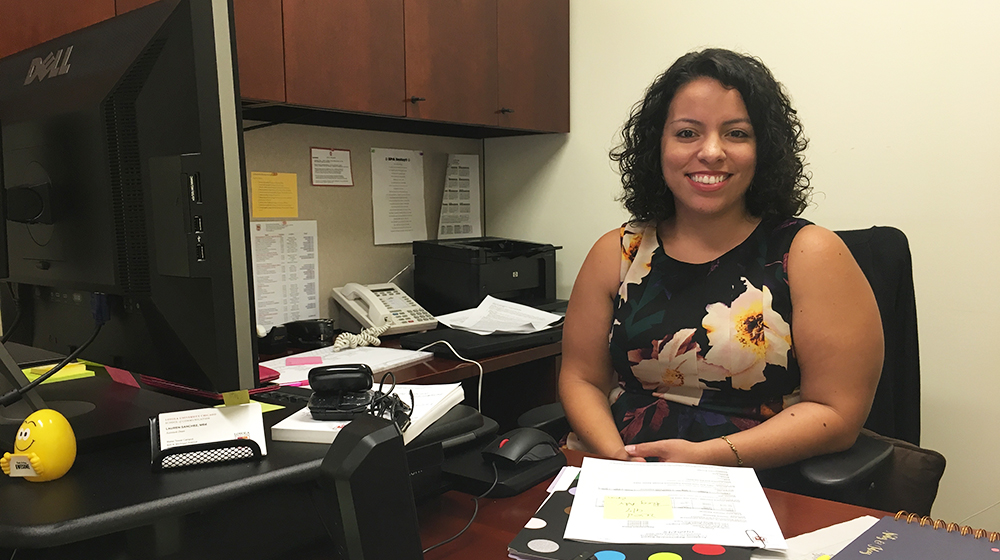 Amid a storm of frazzled undergraduates, she is a safe harbor of calm.

Even though she is just settling into her new role as Assistant Dean of the School of Communication, Lauren Sanchez seems to be sturdy and unfazed by the questions and confusion that students carry into her advising office.

It was this very composure that distinguished her from other candidates for the position of Assistant Dean, according to School of Communication Dean Don Heider

He said, “She has a sense of calm which I think is really important. Stuff happens and [Sanchez] is that person who can help talk students off the ledge and she also does that for faculty,” Heider said.

Prior to being hired as Assistant Dean of the School of Communication, Sanchez worked for seven years as an advisor in Loyola’s College of Arts and Sciences.

“It’s a huge advantage having somebody who has been at Loyola for years. She knows the core inside out and understands the rules in terms of graduation and dropping classes,” Heider Said.

Despite the calm confidence that she exhibits now, Sanchez was once an uncertain undergraduate herself at Western Kentucky University. She kept returning to the same soul searching question that lands many students in her advising office: What is my purpose?

Originally, she thought it was to be a reporter. But after a stint at the school paper, she quickly realized it wasn’t for her.

“The idea of getting up at 3 a.m to cover a fire in a small town in Kentucky just didn’t appeal to me. So I switched to Public Relations and Political Science thinking that public affairs may be the route that I would take,” Sanchez said.

But pursuing a PR internship at a nonprofit the summer between her junior and senior year hinted that she still hadn’t quite found what she was looking for in a career.

Because Sanchez was involved in many on-campus groups, she had the chance to collaborate with a lot of administrators outside of the classroom. These close mentorships brought her to the idea of working with college students.

Although her path was still hazy, she realized, “I want to be in an academic learning environment all the time and feel the energy of a college campus all the time.”

Following graduation, Sanchez was accepted into a two-year program at the University of South Carolina—the only school she applied to. There she got the chance to gain practical experience by exploring different areas of university administration and earned a M.A. in higher education.

Having the sense that she was destined for a bigger city, Sanchez used her connections to secure a job in Chicago as an advisor at Loyola, where she has stayed for her entire professional career.

“It was time for me to move into a new role, something that would give me a little more responsibility. But [the assistant dean position] was also a role that I was really passionate about because I came from a Communications background and would love to work with that group of students again,” Sanchez said.

Already, Sanchez has a bevy of ideas for expanding outreach to students, including group advising by major, establishing a stronger presence on Lake Shore Campus and making the School of Communication offices more welcoming aesthetically.

She wants to make the experience of coming to an administrative office less intimidating, as spending face time with students is one of her highest priorities.

Working in the School of Communication has allowed Sanchez to nurture this inclination to really get to know her advising caseload.

“I’m seeing less students [than I did in the College of Arts and Sciences] but I get to see them for longer. So I’ve been able to have in-depth meaningful conversations with students already even just in this first week,” Sanchez said.

Calm, meaningful conversations in the midst of storm.