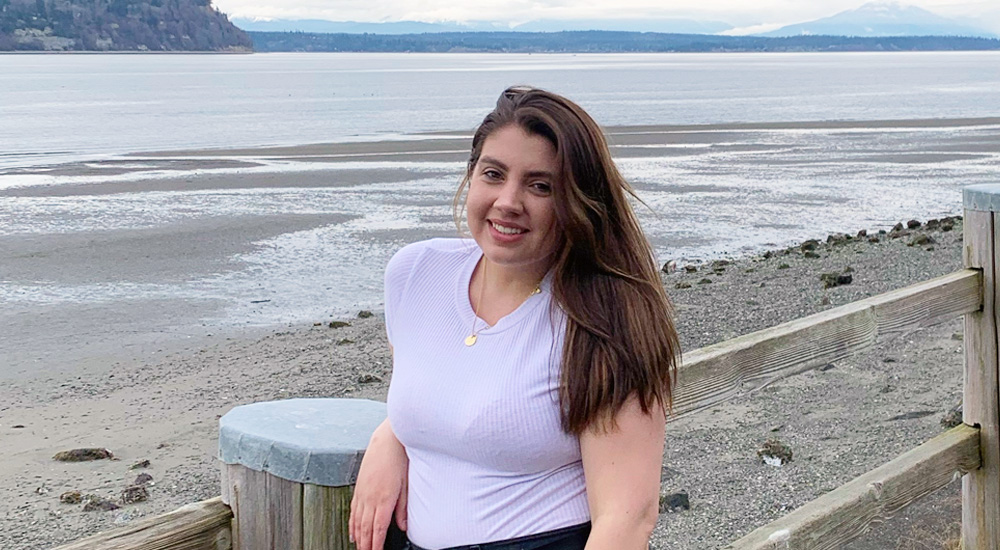 How are you doing?

I recently moved into a new apartment with two roommates, who are both Loyola grads. Emily DesRocher and Carol Austin, both Quinlan students. Things in my neighborhood are pretty tense. Walking around the streets outside, I’ve notice how tense it is. There’s a heightened sense of emotion. It’s like everyone is collectively having the same emotion at the same time. One of the big marches went by my street, and my roommates and I stood on the street and watched it go by. Everyone’s pretty upset with how things are going right now. It’s interesting seeing stores boarded up, but the owners have spray painted “we stand with you” on those boards.

How has the political climate been affecting you?

I’ve been very emotional and upset responding to the situation. I’ve been trying to educate myself and be a better ally to the community, to see what I can do to help and make it better. I’m very privileged to have not been personally affected in terms of work. I think my response to everything has been wanting to be better, to be able to use my voice to help and do whatever I can.

These past few months have been so crazy. I feel like our world is falling apart. I had an initial internship lined up for this summer but it got cancelled, so my offer was rescinded. I was so stressed out about what I was going to do.

Were you able to get another internship?

I ended up getting a summer internship at Hawthorne Strategy Group. Everything I’ve been doing for them has been completely online. If the internship goes well, it could be extended. I’m still waiting to see what happens.

The SOC is such a small community of people and it was so close, and I’ll never get to be there as a student again. I feel like everyone really cares about each other so much. Leaving that space was so hard, because it was like saying goodbye to a sense of in-person connection. In a lot of my classes this semester, we weren’t supposed to have a laptop out at all. It was notebooks only. And then we switched to online and everything changed. It was a lot easier to get distracted.

How has your transition been to online working at your internship?

At my work, it’s a lot of Zoom meetings and phone calls. So many of my professors were so open to trouble-shooting with us for classroom technology, so now at work it’s a lot easier of a transition.

We use Slack and email for communication. They worked really hard to make my onboarding process feel as normal as possible. Everyone has been so helpful and friendly. It’s actually been a really smooth process. I’m someone who’s shy, I’ve realized that I prefer walking over and talking to someone, but it’s all online now. But now it has to be an email you send someone.

What are some of the hardest parts about this transition?

I realized that I’m someone who really likes being surrounded by people, in the office, at school, even on the train. Not having in-person communication has been really hard for me.

How do you feel about commencement/lack thereof?

It was really weird. One day I woke up and I was a Loyola student, really involved in doing stuff on campus. The next day I woke up as an alum. Commencement is a really tangible way to perceive a big transition. It’s to celebrate all of the work that you’ve done, but it’s also a moment to realize that you’re really done with a big phase of your life and moving on to the next one. It’s all very blurred, it’s almost like I didn’t even realize that it happened. And even though we got the notice that we might have to do a virtual graduation in August instead, it’s good that they’re still planning to have a normal graduation for us in the future.

How have you stayed focused during this time?

I have definitely had trouble staying motivated. When I was on the job hunt, it was a very discouraging time. I didn’t know if anyone was even hiring. The entire world as we know it changed. Being in public and going places and having things on your schedule makes it easier to get things done. Being forced to stay in the house made it a lot harder.


How much I looked at the news really determined my motivation level as well. But it was really good for me because it broadened my scope of thinking about the world, about how everything in the world is connected.

Do you think we’ll learn anything from the pandemic crisis?

I really hope so. I hope that people learn to be more compassionate and grateful. I also hope this teaches people that some communities were hit harder than others, that’s something that we really need to start paying attention to. We need to be aware of the privileges in our communities, based on where we live.

Do you think we’ll learn anything from the unrest involving police brutality?

I hope that people understand that the body you’re born into, existing in that body, carries certain privileges for some people and makes life a lot harder than others. It’s important to think about the current system that we’re living in and ways we can change it, so that this doesn’t happen in the future. I hope people learn how be more compassionate and be better allies for communities that are systematically oppressed.

One of the most important things to do is to bet on yourself. When everything started getting shut down and internships were cancelled, it made me feel like everything I had been planning for during the past four years felt really uncertain. Everything I learned in my classes was really foundational and made me a strong applicant. I had to tell myself that I would get through it and get to the other side.
Interview by Genevieve Buthod. Edited and condensed for clarity.