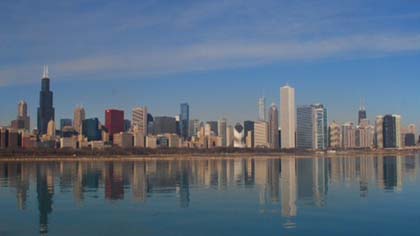 Although journalists are objective reporters and observers of news, they can still help bring awareness to specific issues, build community and foster conversations through the media.

‌“Journalism is fundamental to bringing … issues to public attention,” said School of Communication (SoC) Associate Professor Gilda Parrella. “[Journalists] are doing what they can to focus on the facts of the story and trying to get those right in a way that does not necessarily promote a particular point of view. At the same time, any time you focus the spotlight on anything, you call attention to it.”

Bringing attention to issues will be one of the key topics at a panel discussion called Building Peace Through Media at the “Pacem in Terris: Building Peace in Chicago and Beyond” conference on Saturday, March 23 from 8:30 a.m. to 12:30 p.m.

The event, held at the Richard J. Information Commons, will celebrate the 50th anniversary of Pope John XXIII’s encyclical Pacem in Terris, or “Peace on Earth.”

“We’re trying to commemorate that document, and also to look at circumstances that we see in Chicago – the increasing amount of violence everywhere,” Parrella said. “We’re trying to show what faculty at the university are doing to meet the challenge of reducing violence.”‌

In addition to the Building Peace Through Media panel, three other panels – Building Peace in and with Schools, Building Peaceful Communities and Neighborhoods, and Building International Peace in Chicago: Local is Global – will discuss ways Loyola students, faculty and staff can create and promote peace.

Parrella will moderate the Building Peace Through Media panel discussion, which will take place from 9:30 to 10:30 a.m.

With her 2011 publications of “Consensus-building Journalism: An Immodest Proposal” and “What Mediation Looks Like for Journalists” in Harvard’s Nieman Reports, Parrella is initiating a national project attempting to combine mediation and journalism.

“What I’m focusing on is trying to create a new form of journalism … that focuses on how disputes can be resolved around immigration, gun control or any of these issues,” Parrella said. “How we can have a more mediated conversation, rather than just a win-lose debate, where the outcome of the coverage may in fact lead to much more dissension than it might to more understanding and resolution.”

Each of these faculty members will bring to the panel a unique experience or point of view about building peace through media.

“[Journalists] can choose important stories to write and interview people whose voices are rarely heard,” Lieblich said. “Our stories may result in social change, but we cannot advocate.”

Last year, Lieblich published a book, Wounded I Am More Awake: Finding Meaning After Terror, which tells the story of a Bosnian concentration camp survivor who becomes a psychiatrist so he can help other survivors of trauma heal and find meaning.

“I teach Human Rights Reporting because I want students to be educated in social, legal and political issues so they can be smart and thoughtful reporters, but they are not advocates,” she said. “By choosing to write about human rights, they are choosing to shed light on important subjects.”‌
‌

In addition to objectively reporting on specific issues, Lieblich emphasized that opinion writing is a fundamental way journalists can promote peace, justice and community building. “Only in opinion pieces do we express a point of view,” she said.

Harder, another SoC faculty member who will speak at the Building Peace Through Media panel, uses films and film production to help promote peace and will highlight some of his work at the event.

He has shot, edited and directed more than 18 films and videos, and has worked several years in Jajce, Bosnia-Herzegovina, to help found the Jajce Youth Media Project. The project, Harder said, helped to bring together youth in various ethnic communities in the post-conflict area by using film workshops.

“[Media] is an activity that brings people together. By offering the workshops, people come together and work – that’s the primary beneficial element,” Harder said. “On the next level, when you’re doing videos like documentaries, then you have to go out [and] engage the community. In a little way, you bring a small segment of the population together and they realize they can work together. It’s one of those small things in peace building.”

By using media – film and film production – Harder has been able to bring people together and emphasize their differences in a positive light.

Finally, Wycliff, the third SoC faculty member speaking at the Building Peace Through Media panel, will bring his experience from The Chicago Tribune to enlighten students, faculty and staff on the interactions between the media and its audience.

As the former public editor and ombudsman of The Chicago Tribune, Wycliff spent much of his time working as a kind of mediator at the newspaper.‌

“The whole idea is to instill trust in the news media and the newspaper, and, presumably, instilling trust by explaining how we do what we do,” Wycliff said. “It helps to foster good relations – peace, if you will – on particular topics.”

Wycliff also spent a lot of time responding to questions, complaints and comments from readers. He said people often sent “intemperate emails” under the assumption that no one would actually read them. However, Wycliff responded to these emails.

“All effort was to give a face to the institution and an ear to the public,” he said. “When you do those things, people kind of automatically become a little more civil and peaceful in their modes of expression and their attitudes.”

By listening to the SoC faculty members or attending other panel discussions at the conference, Parrella said she hopes students will be motivated to help build peace in Chicago.

“Loyola students have a particular commitment to making a difference in the world and trying to contribute something that goes beyond just making a living,” she said. “I would hope that the audience will be inspired to become connected with any of the projects that faculty are working on in the university.”