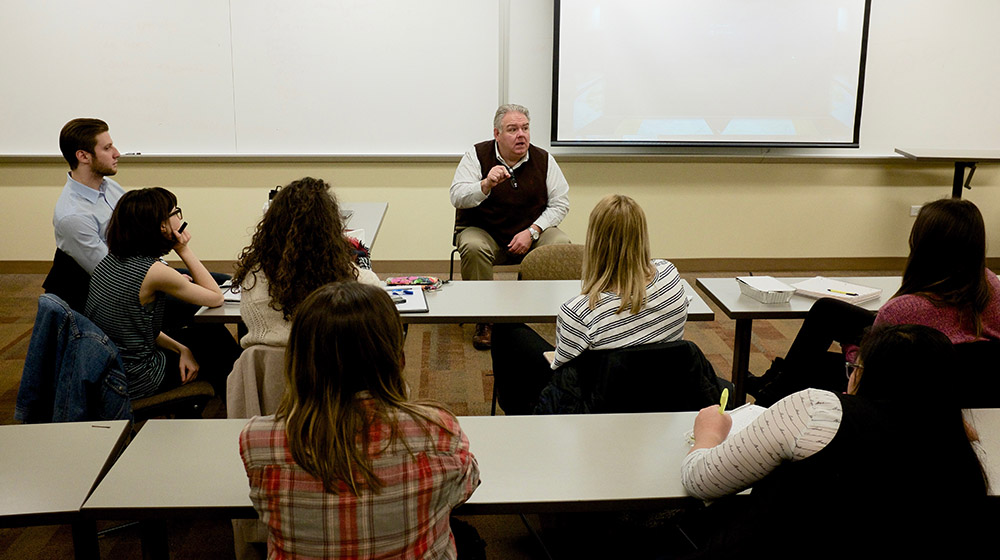 One Loyola classroom had the opportunity on January 28 to hear from a guest speaker,  a Loyola alum who also starred on an acclaimed television series. Jim O’Heir, of Parks and Recreation fame, visited the class, Creative Thinking and Problem Solving, because of his friendship with Professor Robert Akers.

“I'm bringing in speakers from different disciplines to talk about how they apply creativity to their work. I have a pianist, a chef, a theater costume designer, a film director, an editor and the CEO of Jellyvision all lined up to speak to my class. So I reached out to my friend Jim and asked him if he was coming to Chicago,” Akers said.

Besides taking selfies with the students, O’Heir spoke about his career experiences after graduating from Loyola, and his journey from when he was an unknown, struggling actor to his current successes. The students heard valuable lessons on utilizing creativity in various parts of their life and work.

“He spent the better part of the class talking to my students about how he applies creativity to acting, whether it's an improv role or directly from a script, how he has to think on his feet, and deliver lines in different ways,”  Akers continued, “and compete with the likes of Amy Poehler.”